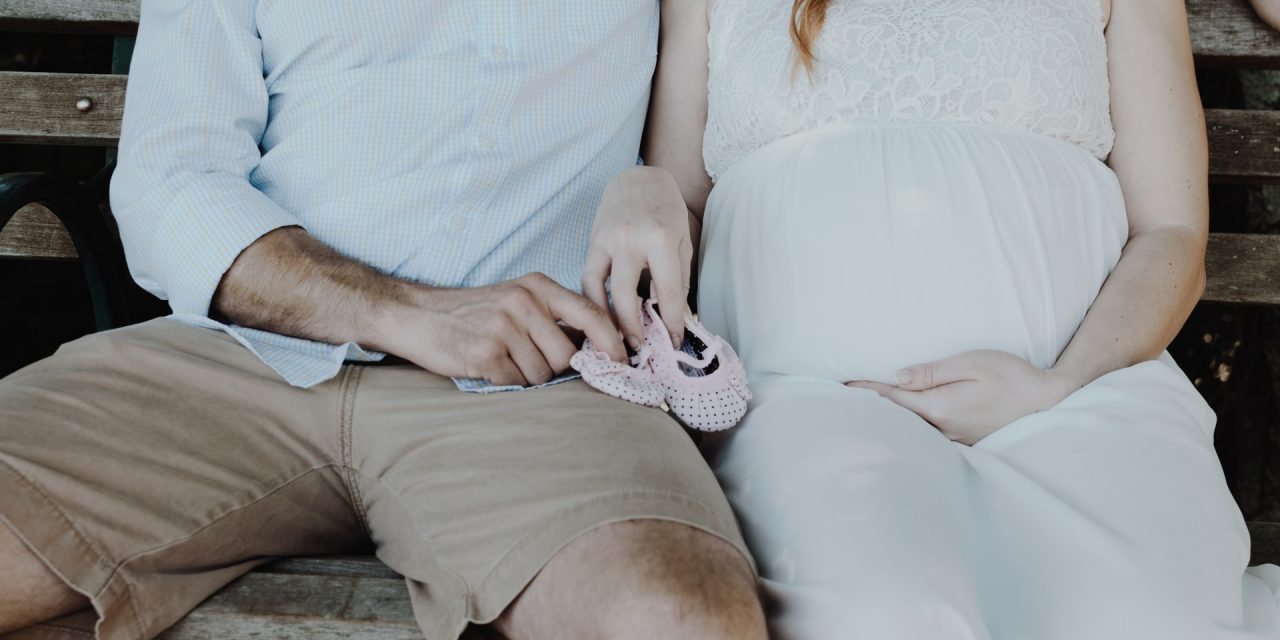 NASHVILLE, Tenn. (BP)—While much of the discussion surrounding abortion focuses on women, unplanned pregnancies involve both a man and a woman. And the men involved have complicated feelings on the subject. 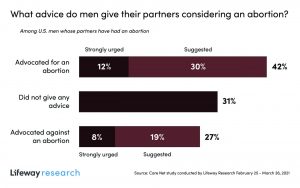 A new Care Net study conducted by Nashville-based Lifeway Research surveyed 1,000 American men whose partners had an abortion after he made her pregnant and who knew about the pregnancy prior to the abortion.

The study reveals men with pregnant partners play a significant role in the decision to have an abortion but may not be aware of how much influence they have.

“In 2015, when we surveyed women who had an abortion, they indicated men were the most influential factor in their decision,” said Roland Warren, president and CEO of Care Net. “Care Net recognized that despite this influence, the role of men had not yet been explored. This new study directly examines their feelings and experiences when the decision to have an abortion was made.”

In making their decision, 42 percent of men whose partners had an abortion say they encouraged the woman to do so, with 12 percent saying they strongly urged her to do so. Around 3 in 10 (31 percent) say they didn’t give any advice. More than 1 in 4 (27 percent) say they advised their partner not to have an abortion, including 8 percent who strongly urged her not to go through with it. 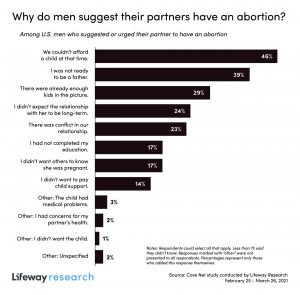 “Many abortions occur because men are urging their partner to terminate the pregnancy,” said Scott McConnell, executive director of Lifeway Research. “However, around 3 in 10 men give their partners no advice even in situations where she discusses the decision with him.”

Most of the time, the pregnancy and subsequent abortion happened in the context of a serious relationship. A third of men (34 percent) say they were married at the time of their partner’s abortion, while another 29 percent were living together. An additional 29 percent say they were “seeing each other.” Few say they knew each other but were not dating (3 percent), had just met (2 percent) or were no longer together at the time of the abortion (3 percent).

When asked what roles they believe most people they know expect men and women to play in abortion decisions, 2 in 3 men whose partners had an abortion say the expectation is that the decision belongs to the woman, including 21 percent who say it is the woman’s choice and the man has no role to play and 46 percent who say it is the woman’s choice but the man should have some input. Around 3 in 10 (29 percent) say people expect it to be a choice the two should make together with equal input. Few (3 percent) say the expectation is the decision should primarily or exclusively be the man’s. 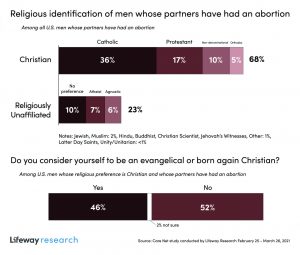 When asked what expectations they believe society places on them in a discussion surrounding unplanned pregnancies, 40 percent of men whose partners had an abortion say they believe others would want them neither to encourage nor discourage the woman’s decision in any way. Around a third (32 percent) believe society thinks the man should encourage the woman to have the baby. Fewer (14 percent) say others believe the man should encourage the woman to abort. And 14 percent are not sure what society thinks.

“Nobody can deny that men have significant influence in many abortion decisions,” Warren said. “Both women and men who have faced an unplanned pregnancy say the man is consulted in the majority of cases and is most frequently cited as having the most influence.”

At the time of the abortion, most men (54 percent) say they knew of local pregnancy centers that offer help, but 2 in 5 were not aware of such places.

While few men say they or their partner spoke with someone at church during their discussions about abortion, half of men (51 percent) say they were attending a Christian church once a month or more at the time of at least one of their partner’s abortions. Even more (66 percent) say they currently attend religious services at least monthly.

More than 2 in 3 men whose partners have had an abortion (68 percent) identify as a Christian, including 36 percent Catholic, 17 percent Protestant, 10 percent nondenominational and 5 percent Orthodox. Around a quarter (24 percent) are religiously unaffiliated, with 10 percent giving no religious preference, 7 percent atheist and 6 percent agnostic. Fewer men whose partners have had an abortion say they are Jewish (2 percent) or Muslim (2 percent). When asked specifically if they are an evangelical or born-again Christian, 46 percent of men say yes, while 52 percent say no.

Despite their religious identify and church attendance, almost half of men (45 percent) whose partners have had an abortion and who attend at least monthly say no one at their church knows about the abortion. Slightly more (48 percent) say someone is aware.

Additionally, only 36 percent of men whose partners have had an abortion would recommend someone discuss an unplanned pregnancy with someone at a local church. Half (49 percent) would not.

Almost 2 in 3 men (64 percent) believe one can talk with a pastor about abortion confidentially, but few expect to receive an encouraging response from the church or pastor if they do.

As men thought about the time of their partner’s abortion, they expected to receive a critical reaction from a local church. More men say they expected churches to be judgmental (42 percent), condemning (30 percent), cold (24 percent) or indifferent (12 percent), compared to helpful (24 percent), caring (23 percent), informative (19 percent) or loving (18 percent). Men who were actually attending church once a month or more at the time of the abortion, however, are less likely than those who were attending less frequently to say the church would respond critically.

“Fear of shame and condemnation appears to be deterring Christians from talking about their unplanned pregnancies with others in the church—those they would otherwise trust as sources of hope and help,” said Warren. “Specifically, some Christian men seem more afraid of how an unplanned pregnancy coming to light could damage their reputation than they’re concerned about the ramifications of an abortion. This should be a challenge to church leaders to change the way they handle and respond to unplanned pregnancies.”

Men whose partners have had an abortion have conflicted and divided thoughts about how people in their situation will be received in church and how forgiveness may apply to them. A 2015 Care Net study conducted by Lifeway Research among women who had abortions found some shared perspectives on the attitudes of churches and pastors but more areas of disagreement between women and men.

Almost 3 in 4 men (72 percent) believe church members judge unmarried couples who are pregnant, yet 62 percent agree churches are prepared to provide support to couples who choose to keep a child resulting from an unplanned pregnancy.

Most men (57 percent) say churches oversimplify decisions about pregnancy options, but 52 percent say churches are a safe place to talk about the ways in which they could respond to the pregnancy, including parenting, abortion and adoption.

Most (54 percent) believe that pastors’ teachings on forgiveness don’t seem to apply to abortion, yet 51 percent say pastors teach God is willing to forgive past abortion decisions.

Overall, 53 percent believe that pastors are sensitive to the pressures a man faces with an unplanned pregnancy.

Women who have had abortions are significantly less likely than men whose partners have had abortions to say churches are prepared to provide support for a child resulting from unplanned pregnancy (51 percent), pastors teach God is willing to forgive past abortion decisions (42 percent), churches are sensitive to the pressures of people in their situation (39 percent) and churches are safe places to discuss pregnancy options (38 percent). They are also less likely, however, to say churches judge someone who is unmarried and pregnant (65 percent).

“There are mixed feelings even among churchgoers on how helpful churches are in decisions about unplanned pregnancies,” McConnell said. “While many men recognize sensitivity and support, fewer are currently willing to recommend others turn to a church when facing an unplanned pregnancy.”

For more information, view the complete report and the white paper or visit Care-Net.org and LifewayResearch.com.

The study was originated and commissioned by Care Net. The online survey of 1,000 American men was conducted by Lifeway Research February 25-March 26, 2021, using a national pre-recruited panel. Quotas and slight weights were used to balance age, region, ethnicity and education to more accurately reflect the population. The nationally balanced sample was screened to only include men whose partners/spouses have had an abortion after he had made her pregnant and he knew about the pregnancy. The completed sample is 1,000 surveys.

Founded in 1975, Care Net supports one of the largest networks of pregnancy centers in North America and runs a national call center providing immediate, real-time pregnancy decision coaching. Acknowledging that every human life begins at conception and is worthy of protection, Care Net offers compassion, hope and help to anyone considering abortion by presenting them with realistic alternatives and Christ-centered support through its life-affirming network of pregnancy centers, churches, organizations and individuals.

Lifeway Research is a Nashville-based, evangelical research firm that specializes in surveys about faith in culture and matters that affect churches.

Photo by Kelly Sikkema on Unsplash