Men learn how to ‘live truth’ at Rewired

DAVIS–Speakers offered applications of how to live or walk in the truth (3 John 3-4). Those who attended, approximately 2,600 men, heard life-changing stories and were inspired and encouraged through in-depth studies and quality fellowship. The Rewired Men’s Conference at Falls Creek Baptist Conference Center was successful once again. 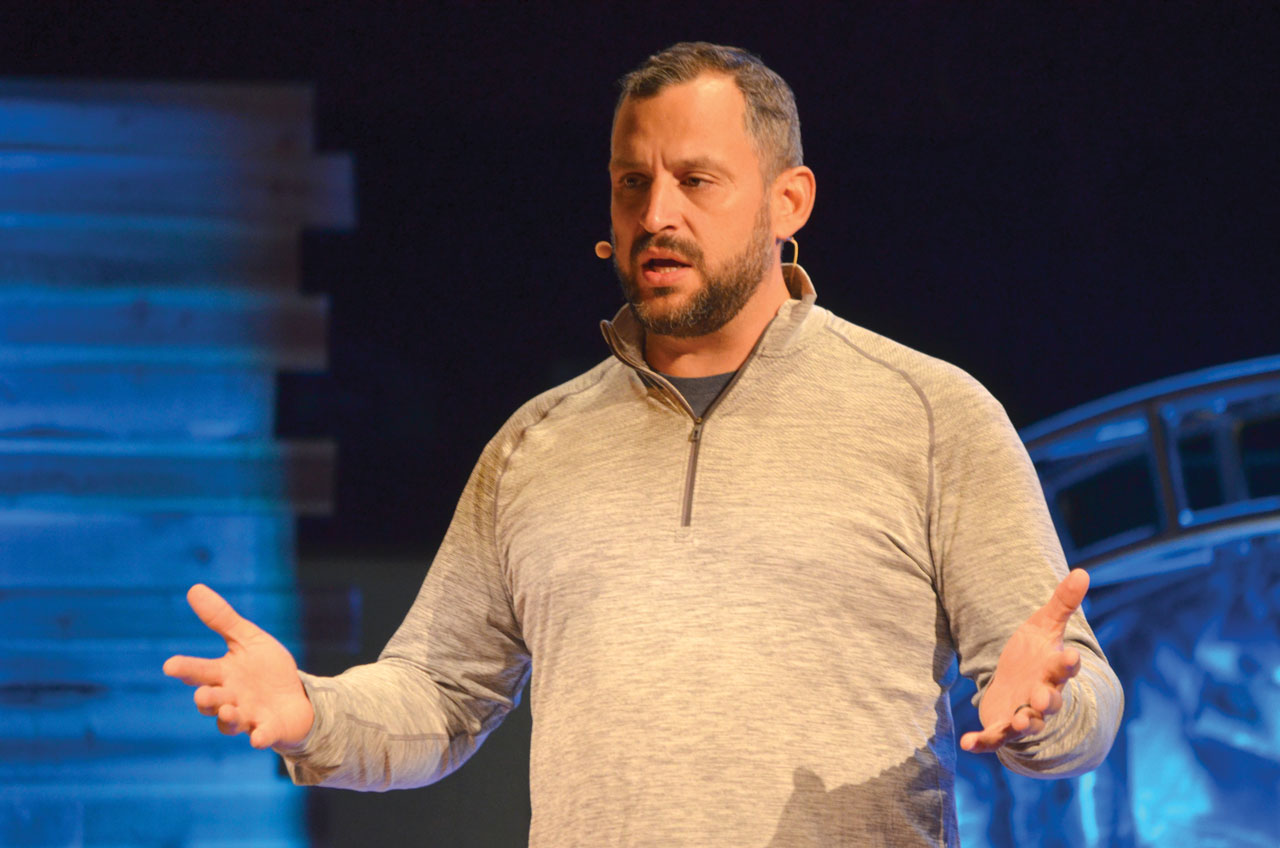 Rewired also was the setting to announce role changes among leadership with the Men’s Ministry of the Baptist General Convention of Oklahoma (BGCO). After leading his 11th Rewired Conference, Keith Burkhart takes on the role of director of the BGCO Conference Centers, and Bubba Burcham becomes BGCO Men’s Ministry consultant.

“When Keith accepted the role as Conference Center director, Bubba quickly emerged as the person to lead the Rewired team as someone who was already immersed in the culture that we desire to continue,” said James Swain, BGCO Equipping Team leader. “Keith has done an outstanding job of mentoring men into leaders through Rewired and will continue to speak into the team that Bubba will lead.”

Burcham will continue to serve as the men’s ministry leader at Broken Arrow, First. A former high school football coach, Burcham is a member of the 2000 National Championship football team at the University of Oklahoma. He and his wife Miranda have five children, three biological and two adopted. They also fostered 14 children.

Seven men filled the roster of featured speakers at Rewired. Tony Merida highlighted the Friday evening session, speaking on the doctrine of adoption from Galatians 4. Merida, the founding pastor of Raleigh, N.C., Imago Dei, spoke how he and his wife Kimberly adopted four children from Ukraine and one son from Ethiopia. He told Rewired attendees that nothing has taught him more about the Gospel, outside the Bible, than adoption.

“A lot of people, when they think about human adoption today, they think that adoption is ‘Plan B,’” Merida said. “It’s what you do when you ‘can’t have your own kids.’ But for God, adoption was never ‘Plan B.’ It was always ‘Plan A.’ And if you’re in the family it is because God set His affections upon you, and He has purposed to have you for Himself. This is 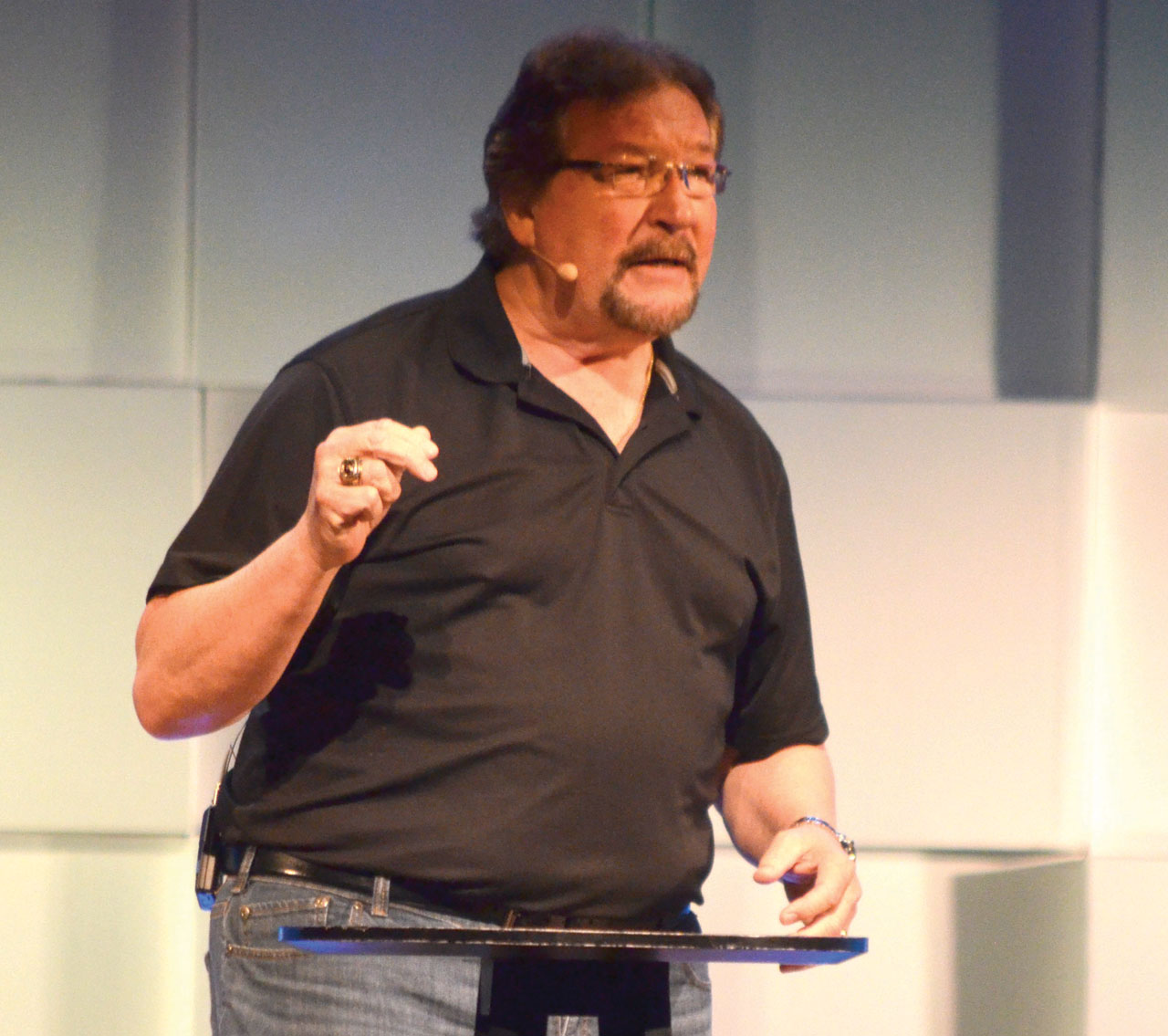 Ted DiBiase, who is known in professional wrestling as the “Million Dollar Man”.

A major hit with many Rewired attendees was Ted DiBiase, who is known in professional wrestling as the “Million Dollar Man.” DiBiase spoke Saturday morning, sharing his testimony of how God delivered him from a life seeking wealth and fame, and now he is an ordained Gospel minister who “travels the country to tell men about the restoration that can only be found in Christ.”

“People tell me, ‘You’re a living legend in professional wrestling,’” DiBiase said. “I don’t care to be a legend. There’s only one living legend, and His name is Jesus Christ. Forget about being a legend. Instead work toward leaving a legacy of being God-fearing men.”

He shared about filming the closing scene of “I Can Only Imagine” in a theater and was concerned that nobody would show up because of an ice storm that day. However, 3,000 people showed up to be in the movie. “You guys rock!” Erwin said in appreciation of Oklahomans.

Erwin also shared another experience while filming the movie, when a guest speaker was sharing a devotion one morning before they started shooting. The speaker was Cody Bobay, a member of Bethany, Council Road and founder of SoulCon Ministries who also is one of the leaders of the Rewired Men’s Conference. Erwin said Bobay became a great encourager for him while he was struggling spiritually during the filming of “I Can Only Imagine.”

“I couldn’t have made it another week without a brother like that standing in the trenches with me,” Erwin said. 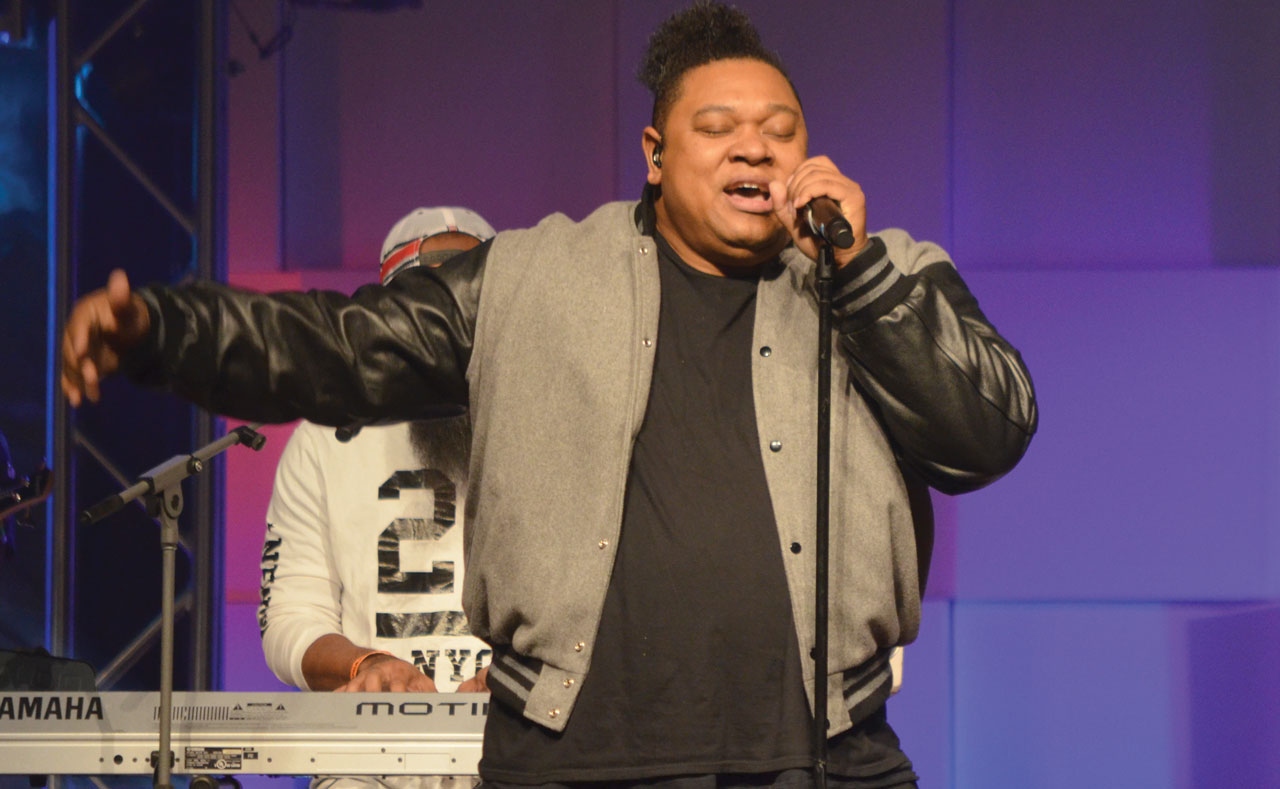 Christian hip-hop and rap artist Tedashii was both a speaker and performer during Rewired. He gave a concert Friday night and then shared his testimony Saturday morning.

Other speakers included Burcham who led off the conference Friday afternoon, speaking about manhood. “If a father doesn’t give his son a definition of manhood, the world will,” he said. “Biblical manhood is not modeled in our culture. It’s not modeled on current television. Do something different. If I’m not going to stand for the Gospel in my home, what does my home 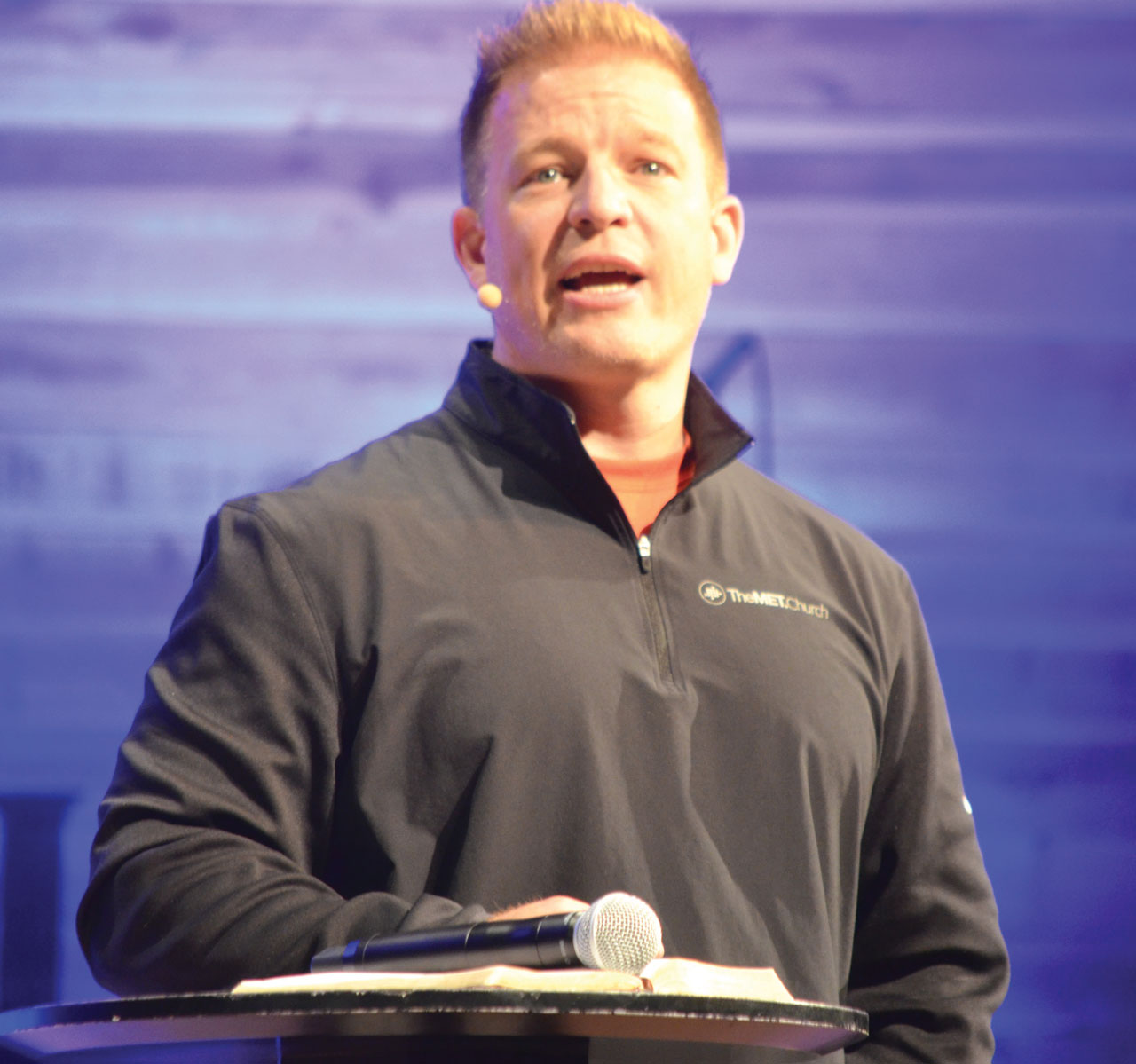 Matt Roberson, lead pastor at Houston, Texas, The MET, who also led worship during the sessions with his praise band.

Matt Roberson who along with his praise band from Houston, Texas, The MET led times of worship during the main sessions also was the closing speaker at Rewired. He concluded with a message focusing on the conference theme of “Live Truth.”

“There is a difference of knowing truth and living truth,” Roberson said. “When someone knows truth… they know what they ought to do but they are not living in truth. Jesus said ‘Listen to what they say, but don’t follow what they do because they don’t practice what they teach.’”

Rewired offered many study options that were divided into breakouts and “Truth Tracks.” If someone chose to attend a Truth Tracks, they remained with the study for both sessions. Eleven Truth Tracks were offered, including topics of daily devotional time, importance of fatherhood, being an authentic disciple and studying the ministry of the Apostle Paul.

In the breakout options, offerings included a panel titled “Leveraging Kingdom vision in creative enterprise,” and featured conference speakers Andrew Erwin and Tedashii among others. Tony Merida also led a breakout about caring for orphans, and Cliff Graham spoke on being “Strong through the droughts.”

///What they are saying about Rewired

Here are some comments from men who attended Rewired: 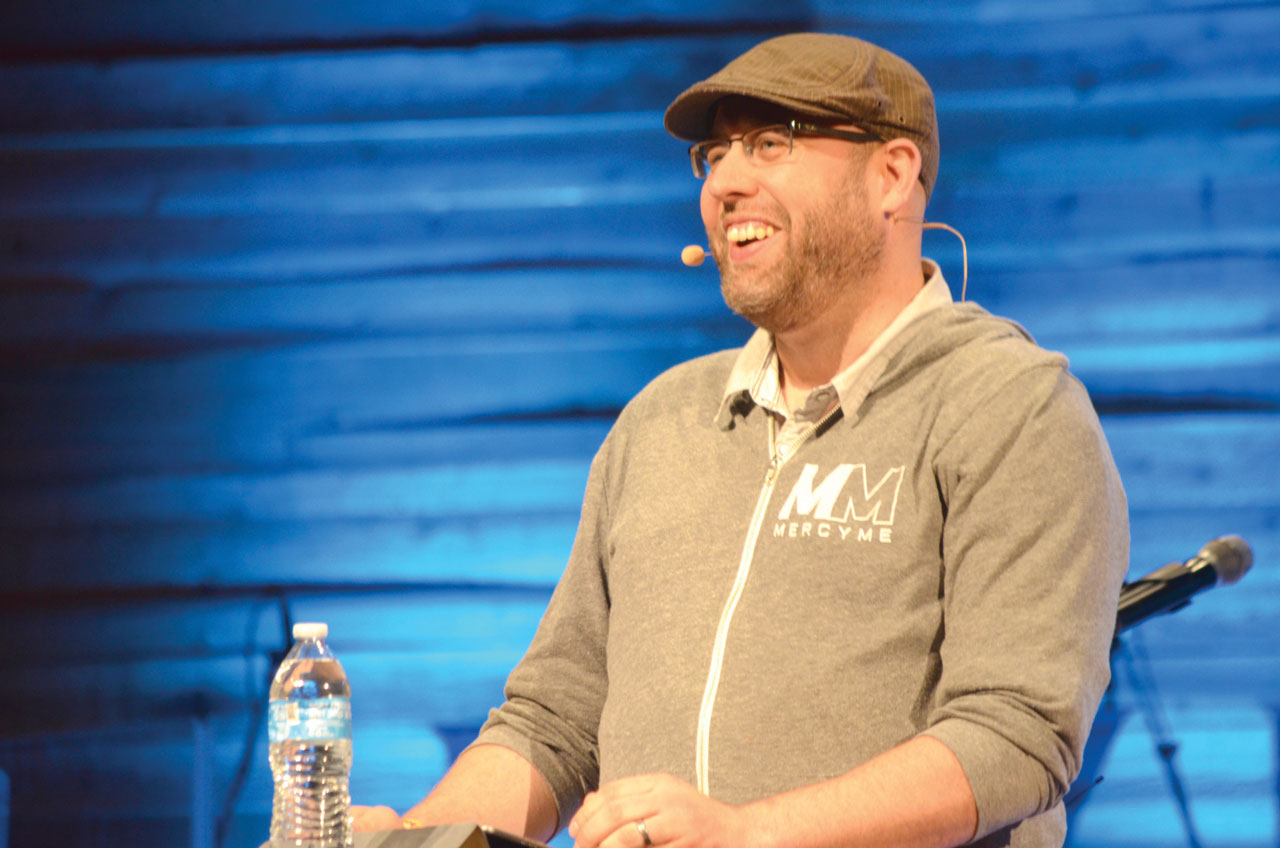 Christian filmmaker Andrew Erwin shared his experience during his recent release “I Can Only Imagine”.

“Back from Men’s Rewired at Falls Creek and overwhelmed by a lot, but the thing that keeps coming to mind is (approximately) 4,000 men singing praises and hymns. Powerful and encouraging,” said Kenny Mossman, a member of Oklahoma City, Emmaus and senior associate athletics director at the University of Oklahoma.

“These two men are impacting culture with the Gospel while excelling at their craft. Tedashii is an amazing hip hop artist/preacher, and Andy Erwin is directing groundbreaking films like ‘I Can Only Imagine.’ What has God put in your hands to do?” said Chris Forbes, BGCO church planting strategist.