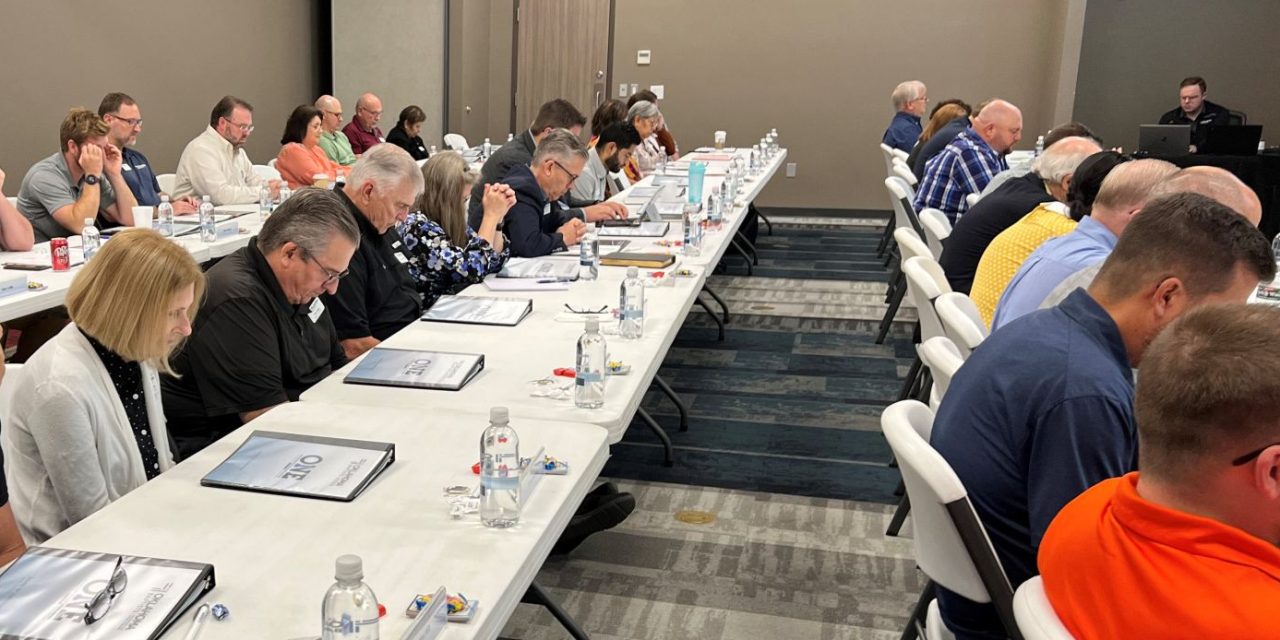 DAVIS—Members of Oklahoma Baptists board of directors met at Falls Creek Baptist Conference Center on Sept. 13 for their regularly-scheduled board meeting. 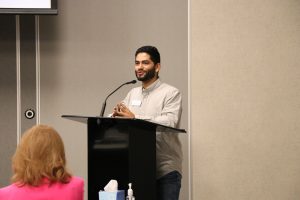 Misael Gonzalez, campus pastor at Owasso, First, shared a testimony and Scripture in the plenary session.

With key business and reports, times of prayer and fellowship, more than 50 board members and Oklahoma Baptist leaders gathered to meet and consider all the ways the Gospel is advancing in Oklahoma and around the world.

“I am now about nine months into my role as executive director, and I have been blessed to be in churches and associational meetings across the state,” Fisher said. “By the end of this calendar year, I will have visited every Baptist association in Oklahoma.”

Fisher emphasized key ministry updates since the board last met in May. 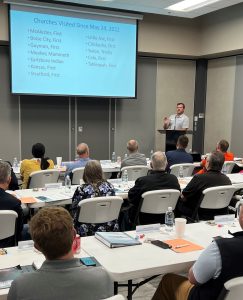 Todd Fisher reported on the great ministry Oklahoma Baptists have done this year.

“We had a great summer, with just short of 3,000 students committing to follow Christ at Falls Creek and CrossTimbers (Mission Adventure Camps), with more than 500 committed to special service in ministry,” he said.

“At the OU BCM semester kickoff event, 26 students in one week committed to follow Christ at OU BCM. Praise the Lord!” he said. 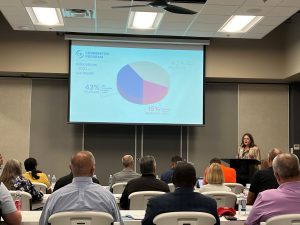 Fisher reported on how the 2021 Cooperative Program (CP) overage was distributed, according to what board members approved in their March meeting.

The 42 percent designated to Oklahoma Baptists—or $591,194 of overage—was spent toward efforts including:

Ukraine relief: Efforts to share the Gospel, provide food supplies and shelter to Ukrainian refugees in Poland and Ukraine.

“We are being regularly updated how the money we sent to Ukraine is being used,” Fisher said. “Just recently, I was informed that the Baptist church in the Ukrainian city of Mykolaiv, which was heavily bombarded by Russia, received a gift funded in part by our gift to assist its church members who had been displaced by the bombing.”

Missionary retreat: Plans are coming together for a spring 2023 retreat for approximately 20 missionaries from Oklahoma serving in the North Africa and Middle East, to gather for a time for rest and encouragement.

Pastor development and wellness: Oklahoma Baptists pastors were given a letter detailing options for encouragement, including a retreat for a pastor and wife. Also, options to receive book sets for pastors, including a full Bible commentary set, were given, and more than 450 have been distributed by regional ministry partners.

“The pastor gift has been very well received,” he said. “I’m still getting almost daily a ‘thank you’ from pastors for the investment we made in them.”

In other board action, members approved a 2023 financial plan for the convention, which was presented by Oklahoma Baptists’ Chief Financial Officer Leslie Osborn and board finance committee chair Russell Duck.

“The Lord is great, and Oklahoma Baptist churches are so very faithful,” Osborn said. “CP Giving was $12,224,800 at the end of the second quarter, which is 51 percent of the annual objective. If giving continues at this rate throughout the year, the CP objective for 2022 will be met and exceeded.”

When Fisher was elected to become executive director-treasurer in November of 2021, he announced his intention to ask the president of Oklahoma Baptists to form an Abuse Prevention and Response Task Force.

This task force, which was established by the board in March 2022 by Chris Wall and members of the board, has been meeting to study the best practices in preventing abuse. The group presented a report at the Sept. 13 meeting. Their scope of work has been forward-looking, and it includes specific recommendations for churches and best practices.

Eric Costanzo, pastor of Tulsa, South Tulsa addressed board members and also will present resources and recommendations at the Annual Meeting on Nov. 14-15 at Mustang, First.

Costanzo said the task force “will provide top-quality resources and strategies that will help churches and pastors have excellence when it comes to preventing abuse, reporting abuse and caring for abuse survivors.”

Members of the board received reports from all four Oklahoma Baptists’ affiliates. Oklahoma Baptist University President Heath Thomas emphasized that new student enrollment is up 20 percent over last year. Baptist Village Communities President Bill Pierce emphasized the ministry impact of all the BVC locations, as well as the “culture of serving” at every age and stage of BVC staff and residents.

Bobby Hart, president of WatersEdge Ministry Services, highlighted the growing ministry services program that helps churches of all sizes with their finances. Oklahoma Baptist Homes for Children Interim President Michael Williams emphasized the expanding ministry impact of Hope Pregnancy Centers, in the wake of the overturning of Roe v. Wade.

In addition to affiliate reports, each of the Oklahoma Baptist board committees presented reports. Chris Wall spoke for the Executive Committee, LeRon West for the Church Resources Committee, Bradley O’Dell for the Communications/CP Committee, Russell Duck for the Finance Committee; and Ryan Goodman for the Support Services Committee.

Board members also spent time together in prayer and fellowship, which punctuated their meaningful meeting at Falls Creek.

The next regularly scheduled board meeting is March 7, 2023 at the Baptist Building in Oklahoma City.

“This is a great time to be an Oklahoma Baptist,” Fisher said. “I’m thankful for the spirit of unity that the Lord has provided, and together we will see the Gospel continue to advance in our state and around the world.”