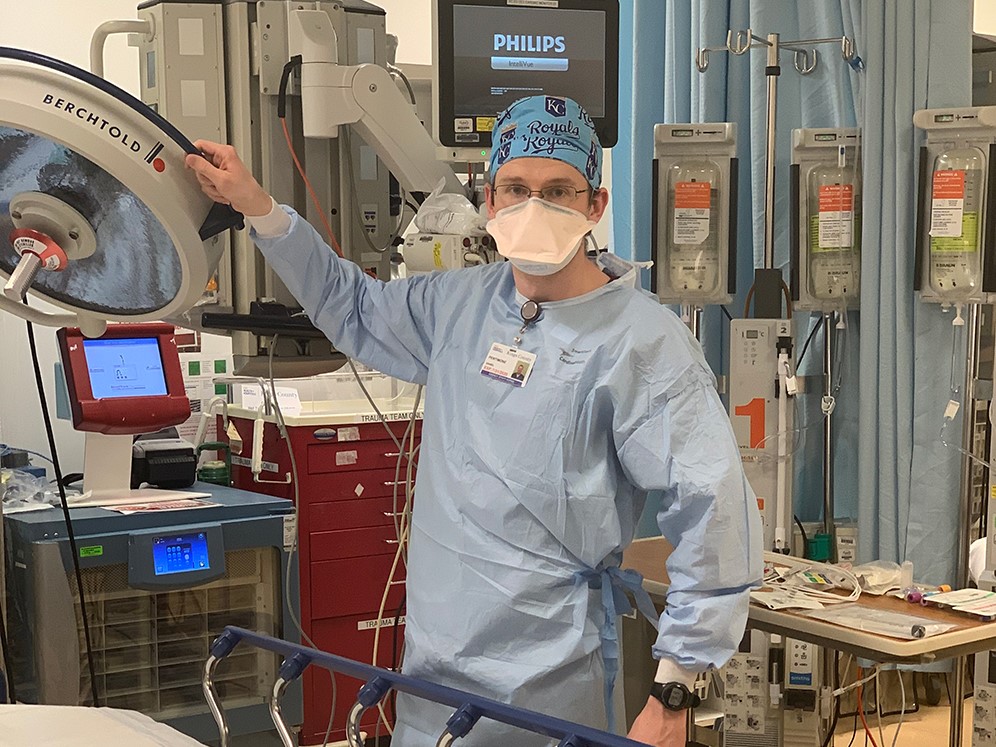 KANSAS CITY, Mo. (BP)—Just a few months ago, Daniel Pentimone looked forward to May 2020 when he would celebrate the completion of his Master of Divinity degree from Midwestern Seminary with family and friends, just like any other graduate. Instead, he spent May 1 at a Brooklyn, N.Y., hospital emergency room battling the COVID-19 pandemic and ministering to patients and medical staff.

Pentimone earned a nursing degree from Metropolitan Community College in Kansas City in 2012 and began working at Belton (Mo.) Regional Medical Center as an emergency room nurse. His love for the stories of medical missionaries like David Livingstone and Hudson Taylor inspired him to enter the nursing field.

As the COVID-19 pandemic swept the United States, word spread that his hospital might send him to assist in New Orleans. That never happened, but the idea stuck with him. He began to consider if he’d be willing to go and serve at a hospital in a COVID hotspot.

“I realized, ‘Yes! Why shouldn’t I?'” he said. “I have the skills, experience and flexibility to serve in a hard-hit location. More than that, I’m a Christian, and shouldn’t God’s people be the first to help out those in need?”

Pentimone first applied directly to two New York hospitals, after hearing New York Gov. Andrew Cuomo’s plea for nurses, but nothing worked out. He decided to apply through a third-party organization that was deploying hundreds of nurses, and within 48 hours, he was on a plane to New York.

Pentimone departed for New York City on April 5, started work on April 10, and soon realized the enormity of the need. Assigned to an inner-city emergency room in the heart of Brooklyn, he worked 46 12-hour, overnight shifts in 48 days.

Such a schedule meant he and his coworkers had very little downtime, and sleep was a precious commodity. He spent 80-90 percent of his shifts working in the ER, but he also floated to some of the “temporary” ICUs.

“There were so many COVID patients that they didn’t have enough room in the regular ICU, so they had to create these temporary units,” Pentimone said. “These units were lined with intubated, ventilated patients—scores of them—separated by curtains. Some of the nurses had little or no ICU experience, and the nurse/patient ratios were high. It wasn’t an ideal situation, but the need was so great. In the middle of a crisis, you figure out a way to make things work.”

Pentimone shared that the situation upon his arrival was abysmal, and he saw things he never would have imagined.

“For a while, they were constantly paging ‘Code 99’ overhead, which is the equivalent of ‘Code Blue,’ or that someone’s heart had stopped,” he said. “So scores of people were dying every night I worked.”

It was surreal to be in the makeshift ICUs, which looked just like the pictures on the news, he said. Rows and rows of patients lying in beds, on ventilators, unconscious, or barely alive.

“It was a spectacle of misery and death in many ways,” he said. “And when you see that, it’s a really powerful reminder of the shortness of life, especially when you see people in their 40s that weren’t expected to make it.”

Though he was scheduled to work in NYC for three weeks, he ended up spending seven weeks there. His last day in Brooklyn was May 29. Though it was hard, he believes the experience was a blessing.

“The experience really allowed me to live out my faith,” Pentimone said, adding that it enabled him to demonstrate “Christian love in action, and more than that, to care for individuals’ spiritually.”

Patients coming into the ER with COVID-19 were often frightened, but Pentimone was able to share encouragement from God’s Word and pray with some of them.

He also had high praise for his coworkers, saying the teamwork and camaraderie was at a level he’d never experienced before.

“We were all there to complete a mission,” Pentimone said, “and we all looked out for each other.” This included dropping everything to help one another keep patients alive.

Though Pentimone—and the rest of the Spring 2020 MBTS graduates—was unable to participate in commencement activities, he did get a celebration when his hospital coworkers threw him a surprise graduation party complete with an ice cream cake.

As his work in NYC ended, Pentimone said he was ready to get home and eager to return to his home church, Lee’s Summit, Mo., Summit Woods.

“I love to study theology and doctrine, and I’m grateful for my time at Midwestern Seminary,” Pentimone said, “but I think that, as Christians, we need to recognize that everything in the Christian life stems from love.

John L. Inman, III is a Ph.D. student and special contributor to the institutional editor’s office at Midwestern Seminary.