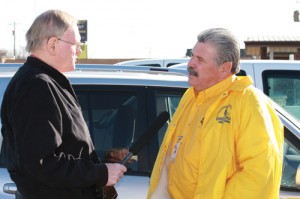 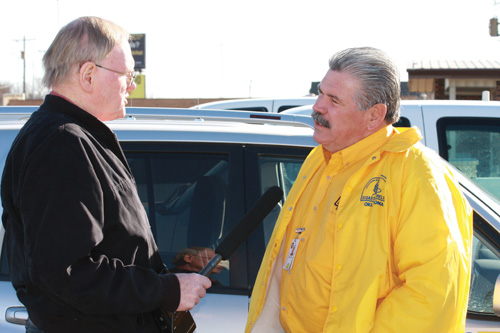 Where were you 10 years ago on May 3, 1999? Most people in Oklahoma can tell you exactly where they were and what they were doing on that day about 6 p.m.

I was getting ready to preach in a revival service at Carter Church near Lake Tenkiller. I was staying with my in-laws who live in the area. My mother-in-law said, “Sam, you need to come watch the news.” I replied from the bedroom, “I can’t. I’m almost late for a revival dinner.” She said, “I really think this might impact your ministry.”

As I walked into the living room, I saw on TV the infamous double twister that has now been seen around the world. Patsy’s observation was the understatement of the decade for me. “This might impact your ministry!” Did it ever!

There I was, 200 miles east of the storm, knowing that what I saw on the TV was going to destroy much of the city in which I lived as well as probably cause many deaths, yet I went to preach at the revival anyway.

I told the pastor that I probably would have to leave immediately after we finished. About mid-way through the service I heard the church phone ring and I knew that I was being called to activate the BGCO Disaster Relief team. Even as I was preaching an evangelistic message, God began to prepare me and my heart for what became a five-week whirlwind of incredible emotionally-charged relief ministry in Oklahoma.

As I drove across the state towards home—literally into the path of the still raging storm—I spoke with media outlets and actually did phone interviews as the storm was still approaching Tulsa.

I prayed, “Oh God, I must have Your direction by Your Holy Spirit. This task that is before me is like none other that I or Oklahoma has ever faced.”

The 92-mile stretch became known as the path of the most powerful tornado ever recorded on Earth—spinning at the rate of 301 mph, yet traveling across the landscape at only 19 miles per hour, grinding up the earth and everything in its path like a giant one-quarter mile wide blender.

Forty-eight individuals were ushered out into eternity, and scores of people were injured; 6,000 homes destroyed in the Oklahoma City metro area alone. That does not include Muhall, which was totally destroyed, or the many other communities such as Bridge Creek, Dover, Stroud and most of the suburbs east and southwest of Oklahoma City. Five Oklahoma Southern Baptist church buildings were destroyed.

The next morning, Oklahoma Southern Baptist Disaster Relief volunteers set up five mobile kitchens across the tornado track. Many of the 34 BGCO churches with church members who had been impacted by the storm began to serve in scores of ways, such as food distribution and debris cleanup. Moore, First, which was hit but not destroyed, became the city Disaster Operation Center for police, fire, and emergency management, as well as Volunteer Organizations Active in Disaster (VOAD).

During the next five weeks of recovery, 25 state conventions across the U.S.A. sent Disaster Relief teams to Oklahoma to assist our state in recovery. Eight states sent chain saw teams. (At that time Oklahoma had no chain saw teams. Today, the BGCO has trained more than 1,400 individuals in chain saw procedures and safety.)

Donations totaling $750,000 came in from all over the country to assist the victims and churches. And we gave thousands of dollars of assistance immediately. Every Baptist family whose home was destroyed by the magnificent storm received $500. I remember Dr. Jordan calling me Monday afternoon and saying, “Porter, do not spend any money because the disaster relief account at the BGCO is now $108,000 overdrawn!” BUT, God is faithful, as always; every financial need for Disaster Relief ministry was met in the next few weeks.

On May 9, 1999, I was scheduled to preach at the pastorless Oklahoma City, Southern Hills. Retiring pastor Jerry Fielder had called me in early March and enlisted me to preach that Sunday. Little did I know that day would be the Sunday after the strongest tornado in history would have impacted 174 families in the church. But God knew, two months prior to the storm, where I needed to be that day.

As I was driving to the church that morning, I spoke out loud, “God, I cannot do this. This church family has experienced loss of life and major injuries, as well as losing countless homes. How can I look into the eyes of these hurting people and bring them hope? How, oh Lord, can I do that? What will I say?”

I have never heard God’s voice with my ears, but that day, He spoke more loudly to my heart and soul than ever before.

“Sam, you have not been alone this past week. You have been operating at a high octane level, and it was not adrenaline or will power. You have been serving with My power. I have carried you all week. I gave you strength, wisdom, understanding and power that you physically do not possess. You have done live national interviews on three major news networks so thousands of believers across the U.S. and world know who you are. They know you need prayer, and they have prayed for you all week. I am answering their prayers for you and your Disaster Relief teams.”

At that point, I began to cry like a baby, almost out of control, knowing that God had overshadowed and empowered me to do all this for Him in His strength. He held my arms like Aaron and Hur did for Moses during the heat of the battle in the Old Testament. He allowed me to see again that he is my refuge and strength. And as a warrior, I needed to become the child and run to Him for strength. Others say, “You Disaster Relief guys are amazing!” No, I tell you, our God is amazing. We just need to let Him use us when the world cries out for help.

I walked into that church filled with the Holy Spirit and power of God, yet completely overwhelmed by his presence and the “conversation” I had just had with our marvelous God. When I stood in the pulpit, I looked across the congregation. I saw fellow believers had bruises, bandages, stitches and hurt in their eyes from being battered by the storm. I had to weep with them for a bit before I could even say anything. But as only God can do, He gave me strength to stand and proclaim that God is sufficient for all of our needs and that He will walk with us through all of life’s storms. It was a glorious time for the church and community. I was reassured that God does empower those whom He calls to special tasks, tasks that are far bigger than what we can ever accomplish with our own strength!

God is raising up an army of believers across this nation to respond when disaster strikes. At times of crisis believers can meet people who truly need the Lord. Our God has eternal hope to offer, no matter how great the loss and sorrow!

The Oklahoma Baptist Disaster Relief team has experienced tremendous growth since those days of my “baptism by fire.” What Laddie Adams began in 1973 has grown from 300 men on May 3, 1999 to more than 3,500 men and women from hundreds of Oklahoma Baptist churches.They, along with members from the 39 other Southern Baptist Convention Disaster Relief states, equal more than 85,000 trained volunteers—the largest trained volunteer work force in the world responding to disasters.

Oklahoma Baptists have crews of trained volunteers ready to do meal preparation, emergency temporary child care and chain saw and mud-out work, as well as providing property damage assessment, portable shower and laundry service, and chaplains’ support We also have water purification teams, a Disaster Medical Reserve Corps registered with US Homeland Security, and a state-wide Incident Command Team equipped to coordinate multiple Disaster Relief ministries and all agencies involved to restore order and normalcy to a community.

Baptist Disaster Relief has become a major evangelistic ministry across the nation to serve hurting people when their world falls apart. As I say to Disaster Relief workers often, “We become the hands and feet of Jesus Christ when we minister to people in disaster recovery. We do Disaster Relief in the name of our Lord in order to earn the right to share the Gospel with others.”

View all posts by Sam Porter