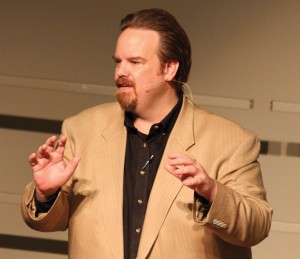 Have we reduced Christianity to reading words on a card? This was one of the questions Ed Stetzer, director of LifeWay Research asked at the Missional Missions Conference at Moore, First.

“We tell people, ‘just pray this prayer to receive Christ,'” he commented. “Just praying this prayer is not what you do. A large percentage of people praying that prayer are not being regenerated. We think we’ll tell them the rest later.”

Stetzer said we need the “robust, disiple-making business” back.

“Programs don’t produce disciples,” he said. “Getting people in classes to make them disciples doesn’t work.”

Stetzer said the “elephant” in evangelicalism is that churches aren’t producing disciples.

“The Gospel isn’t about being good, but about being born again,” he emphasized. “Christianity is the one true faith. It teaches ‘I am accepted, therefore, I obey.’ Other religions teach obeying to be accepted.”

“What is it about our churches that aren’t producing disciples who wouldn’t be called hypocrites by those outside the church?” he asked.

He said the survey also revealed that 72 percent believe God exists, but only 48 percent believe He is the one God as described in the Bible. However, 83 percent of African-Americans believe there is only one God.

Eighty-six percent believe one can have a good relationship with God without being involved in a church.

“This is much higher for younger adults,” Stetzer added. “Younger adults like Jesus, but not the church.”

Stetzer said there must be something lacking in the Christian faith and in churches for them to feel that way.

“Maybe because we treat it so casually, people get a casual view of the church,” he said.

“Most of us have done something in the last 20 years to change the way we do church,” Stetzer noted. “For the last 50 years, we have said the primary way to reach lost people is to invite them to church. The tide is turning, and that is not working anymore. We may have to do what Jesus did-go and tell.”

Stetzer said they surveyed young adults between the ages of 18-22 to try and discover what makes them stop attending church.

He found they leave because of life changes, the church pastor, a change of beliefs, and some just wanted a break from church.

“Being in college or not doesn’t make a difference in the drop-out rate,” he said. “But if they don’t see themselves as someone who is going to charge hell with a water pistol, they want no part of it.”

He said there were several things that kept teens in church.

One is if their parents are still married to each other and still attending church. Another is if the pastor’s sermons are relevant to life and a third is if at least one adult from the church made a significant investment in their lives, personally or spiritually, between the ages of 15 and 17.

“We need to be careful that our youth ministries don’t become just places to keep our teens happy,” Stetzer commented. “They are saying the church is not worth their lives, and they are tired of playing church. People don’t want to give their lives to something that doesn’t change them and doesn’t change the world.

“Many people are looking at the evangelical church and finding it lacking.”