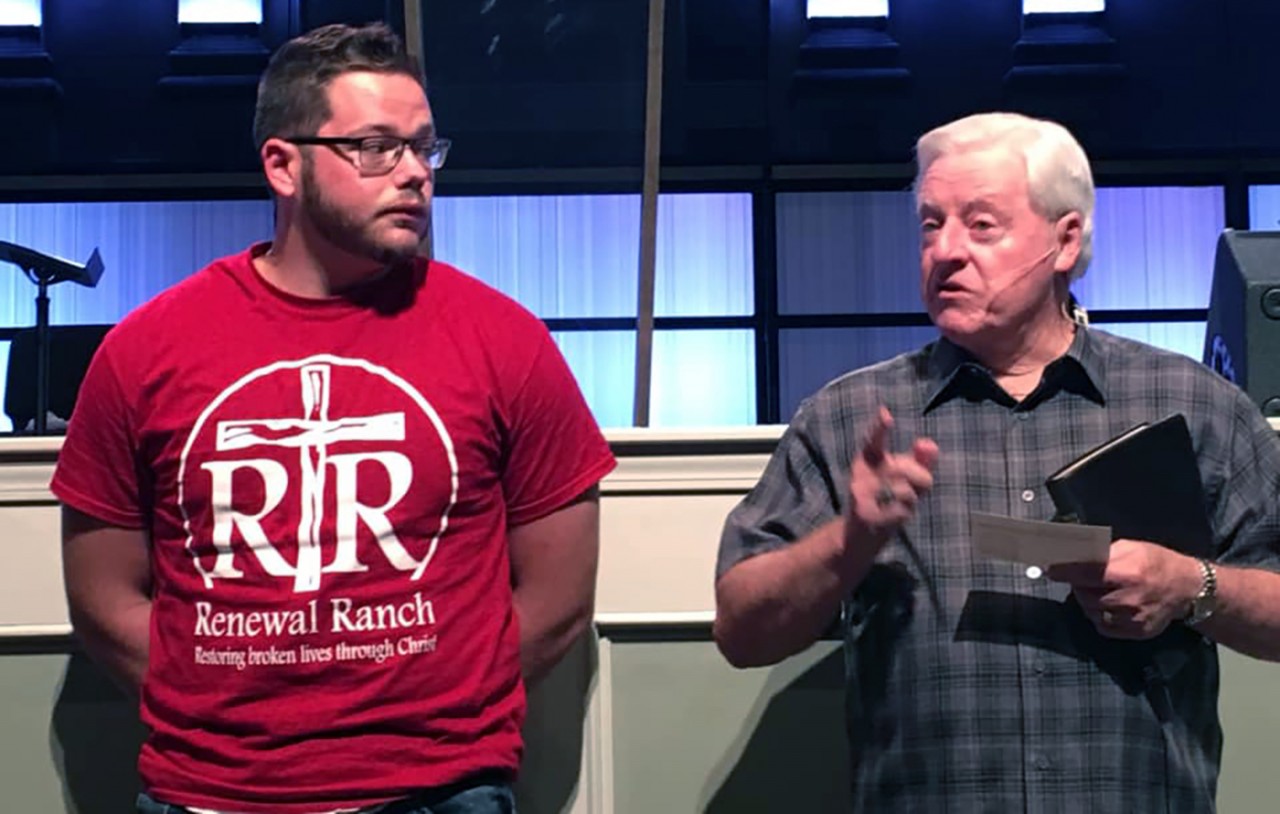 Don Chandler, right, who has been the senior pastor of Conway, Ark., Central, for 40 years, stands with Brenton Winn the night the 23-year-old was baptized at the church. In February, Winn was arrested for causing $100,000 in damage at the church.

Angry at God after he relapsed from an addiction to methamphetamines despite spending time at a faith-based recovery program, Winn knew nothing about Conway, Ark., Central, when he broke in that February evening. High on drugs, Winn went on a rampage and destroyed $100,000 of church property, including laptops, cameras and other electronics. He remembers little of that night, except that he felt desperate.

Six months later Winn stood in a baptismal pool at Central, as Mike Lefler, the church’s associate pastor of ministries, celebrated the young man’s decision to follow Christ through baptism.

“As I’m starting to understand how God works, I’ve realized I didn’t pick the church that night. God picked me,” Winn said. “If it had been any other church, I think I’d be sitting in prison right now.”

Winn grew up in what he calls a “God-fearing” home. His mother and stepfather attended the Church of Christ. At 14, he started experimenting with methamphetamines. By 16, he was taking drugs every day.

“Before I knew it, I had a full-blown drug addiction,” Winn said. “From the time I was 16 until a few months ago, my life was nothing but chaos, suicide attempts and brokenness.”

In 2016, Winn went into a two-week faith-based recovery program. For a year, he stayed off drugs and got a job at a local Lowe’s store. But in September of 2017, his cousin committed suicide. Devastated, he fell back into addiction. By last February, when he broke into the church, Winn was homeless and desperate.

Winn’s journey from a jail cell in February to a baptismal pool in September began when Central senior pastor, Don Chandler, talked to the prosecutor the following Monday. Chandler knew the godly response to Winn would be to offer forgiveness rather than judgement.

“You can’t preach something for 50 years without practicing it, especially in front of your whole church,” Chandler said. “Had we not shown some grace to him, everything we’ve talked about and encouraged, would have gone by the wayside. It was simply the right thing to do. This was not a hardened criminal. This was a young man who had made some mistakes. He was on drugs and alcohol when he did what he did. But he was redeemable.”

Chandler mentioned that day to the prosecutor that the church would like to see Winn get help. One of the church’s partner ministries had been Renewal Ranch, a faith-based residential recovery ministry just outside of Conway. James Loy began the ministry in 2011, just six years after he began a relationship with Christ and kicked a 23-year drug and alcohol addiction.

Over the next few weeks Chandler, the prosecutor, and Winn’s lawyer continued to discuss the best way to help Winn. The case’s judge, who at time had been a board member of Renewal Ranch, gave Winn the option. He could either go to jail, where he was potentially facing 20 years of incarceration, or he could voluntarily choose to go to Renewal Ranch. Winn chose Renewal Ranch.

Renewal Ranch is a 12-month program based on biblical principles. For the first six months, participants are housed on the 102-acre property, where they are given their lodging, food and program materials for free. Every week local pastors and volunteers lead 15-plus hours of Bible study. Participants also have access to trained biblical counselors and are required to do 300 hours of community service. In the second six-month phase of the program, participants live in off-campus apartments operated by the program, work at jobs and continue to go through the Renewal Ranch program. Since 2011, 300 men have come to faith in Christ through the ministry.

“Our goal of this program is to make reproducing disciple-makers for Jesus Christ,” said Loy, who serves as the ministry’s executive director. “I tell people, my goal is not for them to be abstinent of drugs and alcohol. I want that for their lives, but my main goal is for these men to fall in love with Jesus. Through that personal love relationship. There’s freedom from the bonds of addiction.” 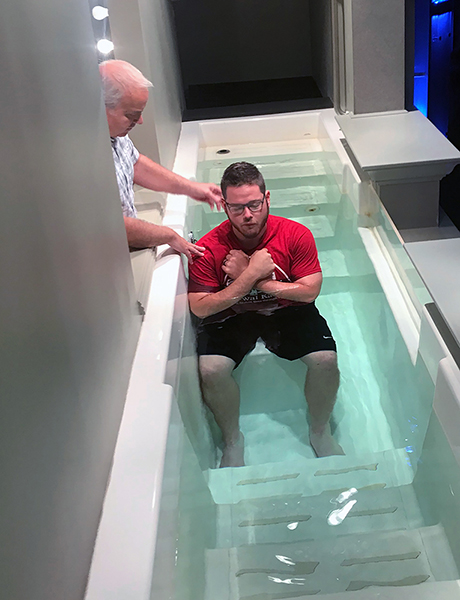 Winn accepted Christ as His Savior after one of the Bible studies at Renewal Ranch. Winn and other ranch residents attend church at Central Baptist on Wednesday evenings. Winn chose to be baptized at the church on one of those Wednesday nights.

“I gave my heart to Christ that night,” Winn said. “I used to think it was a coincidence (that I chose to break into the church that night), but now I call it confirmation that God is real, and He answers prayers. What was weighing on my heart was that I needed a relationship with Jesus Christ.”

Winn still must finish the program in order to avoid jail time. Once he completes the program, he will likely still spend a couple of years on probation.

“We’re challenging our members to continue praying for this man because his story is not over,” Lefler said. “And that’s true for every one of us. God is still working a beautiful story of grace in every one of our lives.”