Lutzer, Reed give pastors valuable instruction at Priority of Preaching Oklahoma Baptist pastors gathered March 28 at Oklahoma City, Southern Hills for the 12th annual Priority of Preaching Conference. The event drew 251 pastors and featured two speakers who are equipped to help pastors preach “From the heart to the heart,” as the theme of the conference emphasized. 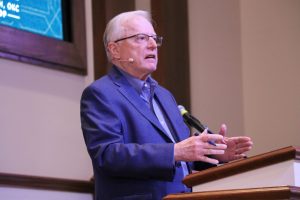 Erwin Lutzer shares much wit and practical guidance at Priority of Preaching.

Erwin Lutzer, pastor emeritus of Moody Church in Chicago, Ill., and Rick Reed, president of Heritage Baptist College and Seminary in Ontario, Canada, made their first appearances as speakers of the Priority of Preaching Conference.

Reed opened the conference speaking on the topic of his book “The Heart of the Preacher.”

“Getting to speak to preachers and pastors who preach the Word is such a treat for me,” Reed said in his opening. As a college and seminary president, he specializes in training preachers. 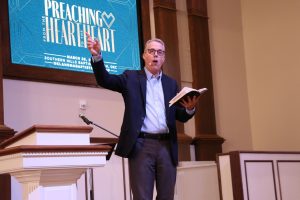 After listing his “hard work” descriptions of preaching, Reed then shared what he claims to be the hardest.

Reed challenged attendees on the test of ambition and making sure pastors are seeking godly ambition and not selfish ambition. He used Jeremiah 45 as a “case study,” as Baruch, a scribe for Jeremiah, was wrestling with ambition.

“Seeking great things is not a good thing when it’s about personal ambition,” Reed said, and then offered two ways Baruch was seeking ambition for himself. First was seeking approval from others, and the second was seeking exemption from suffering.

“(Baruch) did not want to experience the pain that was coming their way (people of Judah), and he knew what was coming,” Reed said. “Baruch doesn’t want to go there.”

Reed instead told pastors they are to experience life with church members, including times of suffering. He then shared what is the right ambition.

“Seeking great things is a good thing when it’s about God’s agenda,” he said.

With much wit and practical guidance, Lutzer offered examples of sermon delivery that emphasized finding key words in Bible passages. “What is the direction of the passage and the big idea?” he asked. “Think of a key word that will give the message direction, unity and progress.”

Among the characteristics of effective preaching he offered, Lutzer said, “A preacher must think clearly and feel deeply and cause his hearers to do the same.”

He described the delivery of a sermon as taking people on a journey. “It’s not supposed to be a bunch of random comments no matter how wonderful those comments might be,” he said. “You have to give them a reason for why they should listen.”

The conclusion is an important part of the sermon, Lutzer said, and even the most mediocre message can improve with a good conclusion.

“Work on your conclusions,” he said. “Don’t just simply say ‘May God bless this truth to your hearts,’ and then the sermon is over. Ask yourself this question, ‘Is there an illustration or a quote that I can use that nails the ending?’”

For the afternoon sessions, Lutzer spoke on “Lessons from a Thousand Sundays,” and Reed gave instructions on “Preaching in Pain.” Concluding his talk, Reed allowed time for pastors to pray with each other.

“Progress, not perfection, is what God calls us to pursue in our preaching ministries. And this we did through the helpful instruction of Dr. Erwin Lutzer and Dr. Rick Reed who encouraged and equipped us,” said Brett Selby, regional ministry partner for Oklahoma Baptists, who was instrumental in organizing the conference. “Thanks to Southern Hills Baptist Church for hosting and to Oklahoma Baptists giving through the Cooperative Program to make this event possible.”