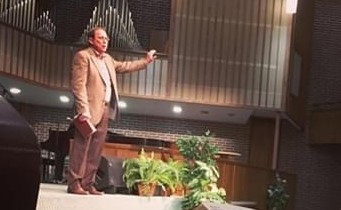 OKMULGEE—Dennis Taylor has come full circle. On Sunday, March 13 he will once again step into the pulpit at Okmulgee, First just like he has almost every week since 1993. The difference, this will be his last Sunday to do so as the church’s Pastor. After almost exactly 50 years of ministry, on “Time Change Sunday” he will be making a transition out of his role as Pastor. 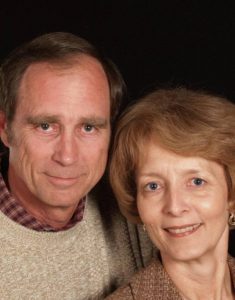 Pastor Dennis Taylor, with his wife Janet, have served at Okmulgee, First since 1993.

Okmulgee, First will honor Taylor on “Time Change Sunday” because in 1972, a 19-year-old Taylor, who had been preaching for several years around Caney, Mt. Carmel, his home church where his dad James Taylor still serves as a deacon, was called to pastor Atoka, Voca on “Time Change Sunday.”

He spent six years there before moving to Durant, Lee Heights in 1978. Then in 1981, Moore, Highland called him as their first pastor. After 12 years leading that church plant he moved to Okmulgee, First. It was at Okmulgee, First that Dennis and Janet’s sons were both called and licensed into the ministry.

His son David, pastor in Los Alamos, N.M., First, said, “For 50 years (my father) has served our Savior as a shepherd in the local church. Words like diligence, longevity, leadership and legacy certainly come to mind, but above them all faithfulness sits at the top of the list. My dad has been faithful to his Savior, faithful to his calling, faithful to our family, faithful to the next generation, faithful to the preaching of God’s Word.”

Taylor has served on a wide array of boards, including Baptist Village Communities (BVC), Oklahoma Baptist Homes for Children, Okmulgee County Family Resource Center (OCFRC) and the board of Agape Crisis Pregnancy Center.

Bill Pierce, BVC president, said, “Dennis is a wonderful friend to Baptist Village of Okmulgee and to me personally. He clears the parking lot when it snows, mows the field in the summer, ministers to residents and staff and is there in a crisis. He has served several terms on the BVC board of directors and has chaired the board. Dennis has Godly wisdom and has been a strong leader on our board.”

Pierce added that “our state aging services association, LeadingAge Oklahoma, will honor Dennis this summer at their annual meeting by naming him the ‘Extraordinary Volunteer of the Year.’”

Robert Kellogg, CEO of WatersEdge Ministry Services, congratulated Taylor on his retirement, extolling his longevity of ministry and for raising two sons that have gone into ministry. Kellogg added, “Dennis has many ministry accomplishments, including helping establish an endowment, one of the largest we manage, that will bless the church for many years to come.”

Jesse Mitchell, a deacon at Okmulgee, First, shared what Taylor meant to him.

“I became incredibly sick in late 2006,” he said. “Prior to one of the most urgent of my surgeries, Dennis gathered the deacons, who came to our home, gathered around our family and then I experienced what he has done so many times. He laid his hands on me, along with the other deacons of the church, and prayed for me, for my family, for a successful surgery, even for the doctors and others who’d be taking care of me.”

Mitchell added, “Dennis has shepherded Okmulgee, First through 28 years of celebrations, births, deaths, unspeakable tragedy and even a global pandemic. Through it all, he has led this flock with a steady, unwavering hand.”

Kim Deer, director of OCFRC, said, “Dr. Taylor’s leadership has been instrumental to my role as executive director. He has provided irreplaceable insight in both administrative issues and victim services. His legacy as a visionary for OCFRC will not be forgotten. I wish him happiness in his retirement.”

Steve Crutchmer, a deacon at Okmulgee. First, said, “In the years I have known Dennis, I do not recall a situation or conversation without Jesus, His Father, His Spirit or their ordinances.”

Okmulgee Deacon and wife Don and Beverly Henson added, “Dennis’s faithfulness to his flock has been exceptional. In any need great or small, he has been there to minister. He is a good and faithful servant to our church and community.”

“Good and faithful servant.” After half a century of pastoral ministry those words should sound sweet to a pastor who has come full circle.