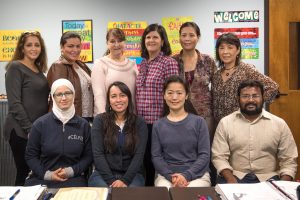 One of the many English as a Second Language classes poses for a group picture. [Photo provided]

In the case of one Tulsa church, God brought people from around the world right to its backyard.

Tulsa, South Tulsa has found a door wide open to minister to refugees and other internationals in the area, from which they have shared the Gospel and shown the kindness of Jesus to people from other countries. 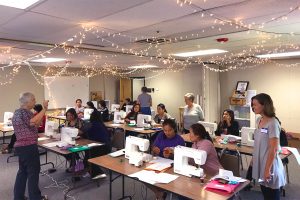 Sewing ministry members listen as their instructor teaches them how to use their sewing machines. [Photo provided]

“We have more than 35 countries represented in our church’s ministries right now,” South Tulsa Pastor Eric Costanzo said. “Within the Tulsa area, you have to increase that number to 50 or maybe more countries that are represented.

“For those who know Tulsa, South Tulsa is the more affluent side of town. Yet there are some significantly vulnerable people living nearby. We realized there were thousands of resettled refugees and international families right here in South Tulsa,” he said.

Many of the people re-settled come from war-torn places and other circumstances of trauma. The places range from Myanmar to Syria. 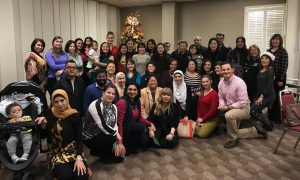 International Christmas party in 2017 where there was much singing of Christmas carols and reading of Scripture. [Photo provided]

The opportunities to minister to these hurting people became evident nearly two years ago, by connecting with the local school districts.

“We tried some other avenues, the resettlement agencies, social agencies, and we weren’t gaining in traction. Since we already had a relationship with the school district—Jenks in particular, and some teachers in the Union school district—we asked ‘How can we serve your international families?’ And from there, the doors blew opened much faster than we imagined,” Costanzo said.

What brings refugees and internationals to the Tulsa area is often education. Oftentimes refugees are settled in the Tulsa area because school districts like Jenks, Union and Bixby have English language learner programs, and they have social workers who will work with those students, according to Costanzo. 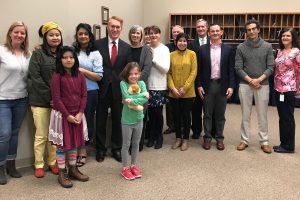 “There was some wisdom and logic in resettling those families in a place where the school systems were set up and equipped to help them learn English. Those are the schools right outside our church, right outside our front and back door. That is the way we identified that need and jumped into that community outreach pretty quickly,” he said.

The South Tulsa ministry includes after-school English programs, where volunteers can serve, celebrate milestones the students achieve and, in the process, build trust and relationships between church members and the international families they were serving.

South Tulsa’s English As Second Language (ESL) program uses state-certified teachers, many with Masters degrees in ESL. They have hired four teachers which allows the church to engage unreached people on a daily basis, year-round. 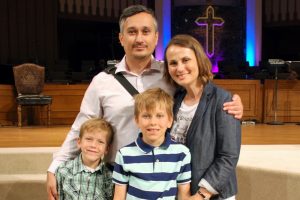 Refugees from Ukraine, the Sherdis family come from a Baptist church in Kiev and are involved in teaching, worship, and will soon lead a mission team from South Tulsa back to Europe. [Photo provided]

“By making the financial investment and giving priority space in our facility, we were able to attract a lot of adult students very quickly,” Costanzo added.

The church went from having very few internationals at the start of these efforts two years ago to having more than a hundred in just a couple of weeks.

From that point forward, the church was able to develop Bible studies and other outreach activities to minister to the refugee families.

“The Bible studies have become a real part of the strategy, and from there, naturally all these other things have grown from that, which I am sure we will talk about more. It is ever expanding because (when) a need arises, we look for a way to meet that need, and we get to engage more people,” he said.

In one of its newer programs, the church has a partner called “Rising Village,” which is a non-profit that works in the country of Ghana. The program empowers mothers and families to create income for themselves, by learning a trade and producing products that can be sold. This has led to a burgeoning sewing program.

“The sewing ministry is something that became an immediate hit with our Burmese and South American populations. The ladies come in and are learning how to use a sewing machine and create pillows and bags that they can use in our ministry center, and they are also learning English at the same time. Those two sewing classes (have been) full since day one. At the end of their time, they can purchase their sewing machine for $25, if they have perfect attendance, so they can keep making things for their families. We have grown from two to five sewing classes,” Costanzo added.

The key ingredient to the flourishing ministry to refugees has been trust. Having a posture of hospitality also has helped the church reach people who come from a Muslim background.

South Tulsa’s ministry efforts have led to professions of faith and other spiritual fruit, including growing diversity among the church’s children’s ministry.

“At our Christmas program last year, you could see children from all ethnicities and countries come together on the platform,” he said. “It’s a beautiful picture of how Jesus loves all the children of the world.”

As God continues to bring more people to the Tulsa metro, Oklahoma City metro and other parts of the state, Oklahoma Baptists will find a growing mission field in our backyard.