Lifeway Research: Most churches plan to open on Christmas and New Year’s Day 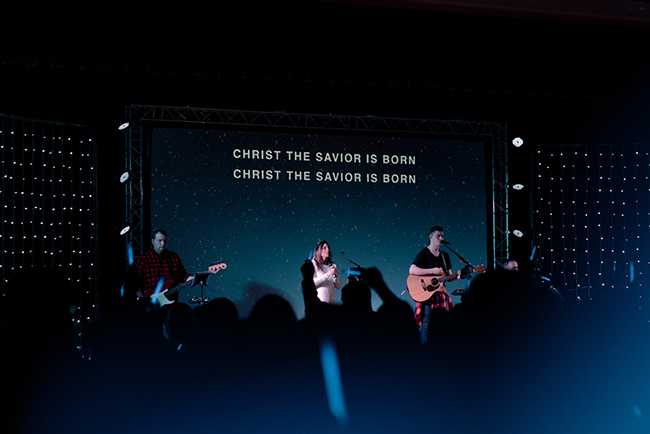 On Christmas Day, churches plan to welcome “all ye faithful” and anyone else who wants to celebrate the birth of Jesus. 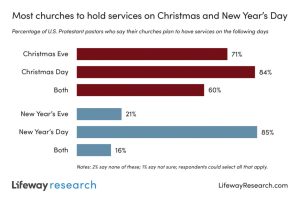 Christmas falls on a Sunday this year, and for most pastors, that gives them all the more reason to gather. More than 5 in 6 U.S. Protestant pastors (84 percent) say their church plans to have services on Christmas Day, according to a Lifeway Research study. Slightly fewer (71 percent) say the same about Christmas Eve. While 85 percent plan on hosting New Year’s Day services on Sunday, 21 percent will have a Saturday New Year’s Eve gathering. Few pastors (2 percent) are not planning on having services on any of those days.

“Families have many traditions on Christmas morning, and most pastors acknowledge not as many of their members will be present compared to Christmas Eve and services earlier in the month,” said Scott McConnell, executive director of Lifeway Research. “However, churches not holding services on Christmas Day are still the exception.”

As pastors recognize Christmas Eve specifically and the holiday season in general as a high attendance time at their churches, most plan to capitalize on the potential crowds by hosting services. Overall, churches have similar plans as they did six years ago, according to a 2016 Lifeway Research study.

In 2016, the last time Christmas fell on a Sunday, 71 percent of U.S. Protestant pastors planned to hold a Christmas Eve service, the same percentage as this year. On Christmas Day, slightly fewer pastors plan to be open this year compared to six years ago (89 percent in 2016 v. 84 percent in 2022).

“Only 6 percent of Protestant churches will skip both Christmas Day and New Year’s Day services, likely including traditions that don’t meet on Sundays,” McConnell said. “Churches that do not meet when these holidays land on Sunday often say it’s for staff and members to spend time with their families. But few want to disrupt the churchgoing rhythm by missing two weeks in a row.”

Ringing in the New Year with church bells

“Some churches meet on New Year’s Eve for a service followed by fun and fellowship,” McConnell said. “Others have a late-night or watchnight service reflecting on the past year with spiritually significant times of prayer and observing communion. For African American churches holding services, there is also observance of Emancipation as it was first anticipated on the eve of January 1, 1863. Even among groups where New Year’s Eve services are most common, it’s still a minority who gather that day.”

While New Year’s Eve is the day during this season when the fewest U.S. Protestant pastors say they plan to hold services, there are some churches that are more likely to gather on the last day of the year. The oldest pastors, those 65 and older, are more likely than the youngest pastors, 18 to 44 (24 percent v. 17 percent). African American (45 percent) and Hispanic pastors (45 percent) are more than twice as likely as white pastors (17 percent) to make plans for New Year’s Eve. Pentecostal pastors (34 percent) are more likely than Baptists (23 percent), Methodists (20 percent), Restorationist movement pastors (14 percent) and Presbyterian/Reformed (5 percent).

Photo by Keagan Henman on Unsplash