Lifeway Research: Americans divided on who should lead healthy conversations on challenges in America 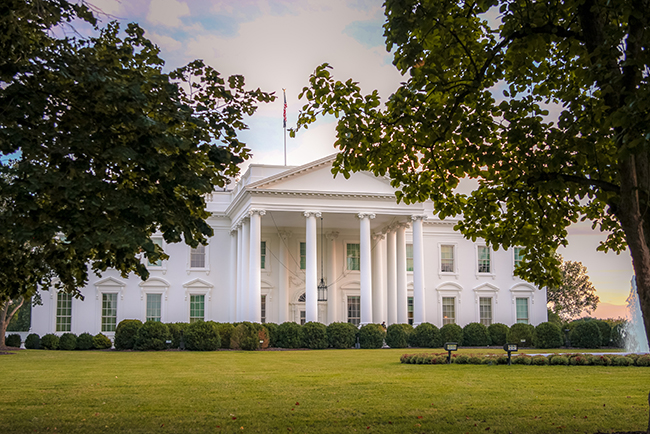 NASHVILLE, Tenn.—Although Americans need to have productive conversations regarding challenges in our society, there is no consensus on who is in the best position to generate healthy conversations around these issues.

According to a study from Lifeway Research, fewer than 1 in 5 (18 percent) Americans say their elected president is in the best position to generate healthy conversations on challenges facing society. And 14 percent believe local church pastors are. 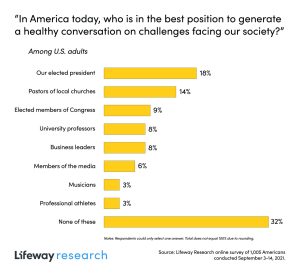 “A beautiful thing in America is that anyone can seek to lead productive conversations about problems in our society,” said Scott McConnell, executive director of Lifeway Research. “Sadly, very few Americans agree anyone is well positioned to do so.”

Fewer than 1 in 10 say elected members of Congress (9 percent), business leaders (8 percent), professors at universities (8 percent) or members of the media (6 percent) are most positively positioned to lead Americans in having healthy conversations about challenges in society.

Nearly 1 in 3 Americans (32 percent) say none of the roles considered in this study are best positioned to lead healthy conversations on challenges in America. 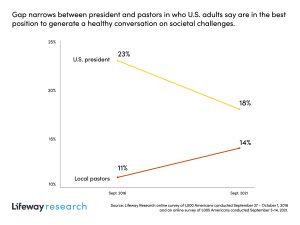 “Anticipation of a new president in 2016 likely led to more people hoping the elected president could lead healthy conversations,” McConnell said. “Midway through the next president’s first term, hopes for that office have faded with even less agreement on who could start or moderate needed discourse.”

There are several key indicators of who Americans will view as holding the best position to generate healthy conversations on challenges in society. Males are more likely than females (10 percent v. 6 percent) to say business leaders are best positioned to lead these conversations, and those who are high school graduates or less are the least likely to say the same (4 percent).

Those in the South, where America is saturated with churches, are more likely than those in the West to say they look to pastors to lead healthy conversations (16 percent v. 10 percent).

Views from the pews

Even those who identify with a religious group or attend worship services hold varying opinions on where conversations about issues in society should be birthed. Catholics are more likely than Protestants to say healthy conversations should start with our elected president (22 percent v. 16 percent) or business leaders (12 percent v. 7 percent). Meanwhile, Protestants (22 percent) are more likely to say pastors of local churches should lead these conversations when compared to Catholics (9 percent), people of other religions (9 percent) or those who are religiously unaffiliated (3 percent).

Christians who attend worship services at least four times a month (30 percent) are the most likely to look to pastors to generate conversations about challenges in American society.

“Society certainly has its problems, and productive dialogue on these challenges has become increasingly hard to find,” McConnell said. “Many have preferred solutions to society’s ills, but with no one trusted to stimulate or moderate a healthy discussion around them, achieving consensus will be rare.”

The online survey of 1,005 Americans was conducted by Lifeway Research Sept. 3-14, 2021, using a national pre-recruited panel. Quotas and slight weights were used to balance gender, age, region, ethnicity, education and religion to more accurately reflect the population. The completed sample is 1,005 surveys. The sample provides 95 percent confidence that the sampling error from the panel does not exceed plus or minus 3.3 percent. This margin of error accounts for the effect of weighting. Margins of error are higher in sub-groups.

Lifeway Research is a Nashville-based, evangelical research firm that specializes in surveys about faith in culture and matters that affect churches. For more information, visit LifewayResearch.com.

In operation since 1891, Lifeway Christian Resources is one of the leading providers of Christian resources, including Bibles, books, Bible studies, Christian music and movies, Vacation Bible School and church supplies, as well as camps and events for all ages. Lifeway is the world’s largest provider of Spanish Bibles. Based in Nashville, Tenn., Lifeway operates as a self-supporting nonprofit. For more information, visit Lifeway.com.

Photo by Ana Lanza on Unsplash.com