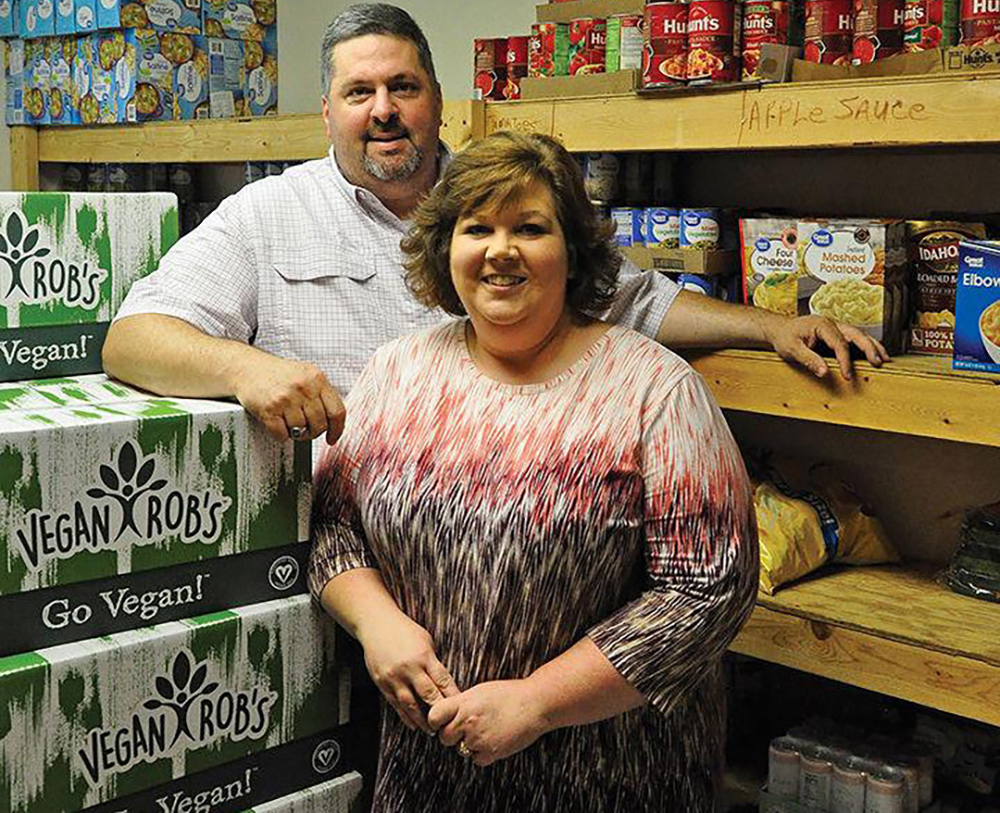 PIKEVILLE, Ky. (BP) — When Richard Greene visited Gulfport, Miss., while on his first mission trip in February 2006, he said it would become the moment to define his future as a pastor and as a Christian.

It had been six months since Hurricane Katrina ravaged the Gulf Coast. The Category 3 hurricane impacted dozens of towns like Gulfport, killing more than 1,000 people and displacing thousands from their homes. 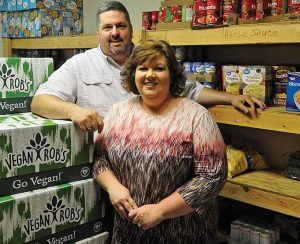 Richard Greene of Prestonsburg stands with his wife Amy inside the food pantry at the Freeda Harris Baptist Center in Elkhorn City. On July 1, the couple took over the mercy ministry center from Greg and Alice Whitetree, who retired after running the center for 35 years.
News-Express photo by Nicole Ziege

According to National Geographic, the storm caused an estimated $108 billion in property damage, making it the costliest storm on record.

After meeting many people affected by the storm and witnessing what he described as “absolute devastation,” Greene now 46 said that trip to Mississippi made him decide to work in missions.

“You feel an instant connection to the people and the communities that have been affected,” Greene said. “It changes your heart.”

Greene and his wife Amy, became the new directors of the Freeda Harris Baptist Center in Elkhorn City, Ky., on July 1 this year. The local couple took over the mercy ministry center from Greg and Alice Whitetree, who retired after running the center for 35 years. A reception to welcome Richard, Amy and their 10-year-old son, Alex, took place on July 13 at the center.

“They did a wonderful job leading the ministry,” Greene said, referring to Greg and Alice Whitetree. “We’re excited about the opportunity we have, and we feel incredibly humbled by the opportunity to lead the center.”

The Freeda Harris Baptist Center, founded in the 1960s, works to share the Gospel in Pike County by providing after school clubs, vacation Bible schools, sports camps, hunger relief, clothing distribution, craft classes and seasonal celebrations. The ministry is connected to the Pike Association of Southern Baptists and the Kentucky Baptist Convention.

Before accepting the position at the center, Greene served as the pastor for the Licking River Baptist Church in Salyersville for eight years. Greene has worked in ministries since 1999, and he also served in the Kentucky Baptist Disaster Relief, an active disaster relief program provided through the Kentucky Baptist Convention. In the past two or three years, Greene performed international missionary work in São Paulo, Brazil, and Belfast, Northern Ireland, and he plans to return to Belfast on a mission trip in October.

Greene said people do not need to travel to other countries or states to do mission work because they can perform community service and mission work in their own communities. He said he wants to promote that idea as he moves forward at the center.

“I want to help people become more mission-minded and help create a catalyst for people to go back and do mission work in their own communities,” Greene said. “I don’t want them to go on a mission trip. I want them to have a mission experience.”

Amy, who married Greene in 2004, works part time as a social worker, and before that, she worked full time at Hospice of the Bluegrass, a hospice care clinic in Pikeville, and worked with children’s ministries. She said she feels like her and her husband’s past involvement in missions and community service has helped shape their path for leading the center.

“We love working with the community and helping to share the word of God,” Amy said. “I think we can look back at the past few years and see how everything we’ve been a part of in our lives has prepared us for this.”

At the center, Greene will work with up to about two dozen volunteers from different mission teams to continue the services at the center.

Greene said he also has more plans to shape the center, including an expansion of the center’s food pantry and a mobile children’s ministry starting in 2020. The mobile ministry will be a trailer filled with outdoor games, education materials and other support resources. Greene said he and different mission teams at the center will be able to transport the trailer to churches, trailer parks and other more secluded locations in Pike County, providing a kind of “backyard Bible site” for children to learn the Gospel.

Jason Lowe, director of missions at the Pike Association of Southern Baptists, said he believes the Greenes hold the right kind of ideals to lead the center into the future.

“There are physical needs in this area, that’s for sure, but there are spiritual needs as well,” Lowe said. “I think they’ve done a great job at understanding that and working to address it.”

Lowe said he is looking forward to Richard and Amy working with him and bringing a “fresh and renewed” vision to the center, following the legacy of Greg and Alice Whitetree.

“I think they will continue the work that they’ve done and improve upon it,” Lowe said.