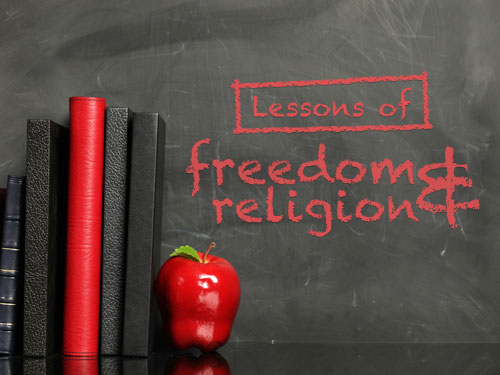 Earlier this year, the Baptist Messenger produced a podcast featuring renowned University of Oklahoma professor J. Rufus Fears, who passed away Oct. 6. Fears talked about the future of religion and liberty in America. Following is a transcript of that interview.

Baptist Messenger: Dr. Fears, in George Washington’s farewell address from 1796, he said, “Of all the dispositions and habits which lead to political prosperity, religion and morality are indispensible supports.” How adrift from the words of the father of our country have we strayed?

Fears: Well, the short answer is we have drifted very, very far away. Tragically far away. I want, though, to begin by saying why we study the Founders of our country. We need to stop and reflect upon what they achieved.

The Founders declared their independence from the greatest superpower of the day, Great Britain, and they declared it in the name of enduring moral principles rooted in God. That God is the Creator of the universe, He has given to the human race a set of laws that are the same in all places and in all times, and that under these laws, all men are created equal and endowed by their Creator with the unalienable rights of life, liberty and the pursuit of happiness.

That makes the United States the only country in history founded upon moral principles. Now, the Declaration of Independence would only be a historical footnote had the Founders and the brave Americans who followed them not won that independence on the field of battle. What truly transformed history was that these same Founders, in Philadelphia in one summer of 1787, faced by an overwhelming debt and mortgage crisis, created the Constitution, which still, more than 200 years later, gives us freedom under the law and ensures our religious freedom.

But even greater than the Founders were the regular Americans who, in their wisdom, ratified that Constitution. So you see, the Founders were but the reflection of the moral fiber of the ordinary American of that day. Now I fear that our politicians today—and I very much like the fact that George Washington refers to “mere politicians”—that the politicians of our day are the reflection of Americans today. Because far too many in America today have not only drifted away from but also actively rejected the idea that morality and religion are essential to democracy. The Founders believed that the best Constitution imaginable will not long ensure freedom unless the citizen body is imbued with morality and the love of God, as well as the love of country, that is, patriotism.

Messenger: That is a most interesting point about the leadership being a reflection of the populace. You know, thinking about the moral decay, the family breakdown, we could cite many statistics—can our republic long last the decay?

Fears: I don’t think it can, and it’s interesting that we’re in this terrible debt crisis and Congress seems completely unwilling to solve it. Of course, it’s not just in the United States. The European political leaders are equally inept and unwilling to solve their debt crisis, and since we have a global economy, the whole of this edifice may collapse upon us, creating hardship for millions and millions of people. I think that a debt crisis, and here again I would be citing the Founders, is but a reflection of a moral lapse.

In many of the state constitutions, the founding generation wrote in specific virtues and qualities that a citizen body must have in order to retain liberty. One of these was piety, but another was frugality, to save money and to invest it wisely. The quote you began with so aptly comes from George Washington’s farewell address. He delivered that himself to newspapers in Philadelphia to announce to his countrymen that he would not seek a third term.

But in it, he said, “I have so appreciated all the honors you have bestowed upon me that like a good friend, I wish to offer you some advice.” And, succinctly, his advice was to avoid foreign entanglements. America is unique unto itself, do not get into other people’s wars. Two, do not have political parties, they will destroy freedom, and thirdly, stay out of debt. That will ruin a country more quickly than any other thing. And in that, he was reflecting the thought of Adam Smith, whose great book, The Wealth of Nations, was published in 1776, and Adam Smith said debt will be the ruin of every great nation in Europe.

Messenger: Those words echo into today. Could there be a great statesman to lead people perhaps that God is preparing, but do you see any leadership on the horizon or what would a leader look like of Washington’s caliber?

Fears: Well, I think again, following Pres. Washington, we ought to distinguish between a statesman and a mere politician, and there are four qualities that distinguish a true statesman: a bedrock of principles, a moral compass, a vision and the ability to build a consensus to achieve that vision.

But what determines whether your bedrock of principles is good or bad is your moral compass. A moral compass guides you through life like the North Star guides you through a dark forest, and it is a belief in absolute right and absolute wrong. And for Washington, that absolute right was freedom and liberty under God. For Abraham Lincoln, it was that slavery was wrong in all places and in all times. For Ronald Reagan, it was the Soviet Union was an evil empire.

So leaders like Churchill and Reagan were never afraid to use the word “evil.” But you have to have a vision. The vision of Washington is of you and me sitting here in this beautiful city, Oklahoma City, saying exactly what we want to, and a country that has spread freedom across the world. And the ability to build a consensus, well, you can have the best vision in the world, nobody follows you, and you’ll go nowhere. Washington did it by leading through moral authority, as did Lincoln, as did Ronald Reagan. So that’s what makes a statesman.

Now, I do believe that at every critical moment in our country’s history—the Revolutionary War, the Civil War, World War II, the time of the almost economic collapse of our country under Jimmy Carter—there has appeared a leader, sometimes from very unlikely places. Who would have imagined, in fact it astonished the London Times, that America would choose to lead it an inexperienced, backwoods solicitor from Illinois? That’s how they described Lincoln.

Or Hollywood? Who would have thought that Hollywood would have produced one of our greatest presidents?

So, you can believe as you go through life that these just happen by chance, or that God is working. I believe God has worked in all those occasions to bring forth a leader, because God has chosen America for this special duty. But I worry right now because I certainly see no leader on the horizon. I do not see a nation that wants that kind of moral leadership, or is willing to pay the price for that kind of moral leadership.

I also tell you that I think the press (media) can make and unmake any leader in the world. What would the press have done to Winston Churchill in 1940? They would have brought up all his past political failures, and he was too old to be Prime Minister of Britain. So would the press even allow a true statesman to emerge?

Messenger: Are there some values that maybe the ordinary citizen, the ordinary Baptist, reading this could take upon himself and his family?

Fears: Yes, and you know, the Baptists were prime movers in the spread of liberty across our continent. Baptist preachers were some of the strongest speaking out in favor of the Revolution and in preaching these virtues of liberty and country. The Founders also believed education was essential to freedom and students had to be educated for the responsibility of self-government, and that’s of course something we wish to forget today.

For every freedom, there’s a corresponding responsibility. We only want freedom. We don’t want responsibility. That is why the Northwest Ordinance, passed by the first Congress meeting under the new Constitution in 1789, part of that ordinance for settling the territories that later became Indiana and Ohio and so on, was that religion and morality should forever be encouraged alongside education.

Now, we have taken God out of the schools, we have taken the teaching of values out of the schools, so we are systematically refusing to educate our children in these fundamental moral values. That would have shocked the Founders of our country. Congress was not supposed to make any law interfering with the free exercise of religion. Now, all of these court rulings that do not allow God to be mentioned or the Lord’s Prayer to be read are interfering with the free exercise of religion for millions of our countrymen. So, if we have educated generations now of American citizens to be without morality, to put God off in a closet, then we cannot expect to maintain our liberty.

Listen to the complete interview at www.baptistmessenger.com/drfears.