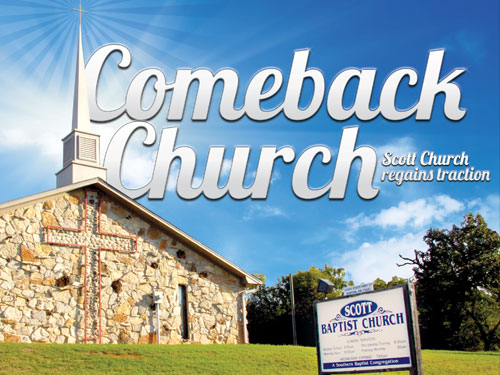 “And though your beginning was small, your latter days will be very great.” – Job 8:7

That verse has special significance for Mike Price, pastor of Scott Church in Caddo Association and his congregation.

The church, founded in 1946, had dwindled to only a handful of members a few years ago. On Easter Sunday 2006, the church had only 13 in attendance.

“It was very confronting,” said Price, who was serving as interim pastor at the time. “I told the congregation that we need to decide this day. Was God through with us or do we still have a purpose?

“We decided as a group that day that we believed God was not through with us yet,” he said. Price and his congregation put 13 stones out in front of the church as a sign of their covenant to God and each other.

In the years that followed, God blessed the congregation with growth.

The church has had more than 50 baptisms in Price’s pastorate. Today, the congregation averages more than 50 in Sunday School and upwards of 80 in worship.

Located near Hinton, Scott Church has a storied past. The church has ministered to the community throughout the years, such as to 10 families who were made homeless by a May 1981 tornado. The church moved to its current location off Highway 37, a building on a site donated by charter member Elsie Campbell.

The pastor made two commitments when taking on his role.

“I promised to preach the Word of God and to love people,” said Price, who previously served as a chaplain in prison ministry for more than 20 years.

“I was saved when I was 9 and called to preach when I was 12,” he said. “It took God many years to move me to this point in life, but everything was preparation for what I am doing.”

Price and his wife, Jean, have been married 48 years and have three grown children. His son, Mark, is pastor at Binger Church, also in Caddo Association, and his son-in-law, Brad Mardis, is technical arts director at Bethany, Council Road.

Under Price’s leadership, the church has aggressively taken part in missions. The members have taken trips to Mexico, Nicaraugua and most recently,  Brush, Colo.

“Thirteen is a number of significance in a good way for our church,” said the Pastor. “Of course we had 13 members on that Easter Sunday we first committed to make a go of things, but the number keeps coming up. For example, we took 13 members to Colorado and helped a church put on Bible school. We saw 32 enrolled and 20 decisions,” said Price.

Price has led the church to give faithfully to both the Cooperative Program and Caddo Association.

“If we are faithful to ‘tithe’ of the gifts we receive, God will bless,” he said.

As of 2011, the church gives 10 percent from its budget both to CP and the association.

When Price took over as pastor, the church had two Sunday School classes. Today, it has more than a half-dozen, including two adult Bible studies, a young adults’ class, youth group and children’s divisions.

“As Sunday School goes, so goes the church,” said Price.

The church also puts on events for the communities, such as a “movie night” for youth. Earlier this month, dozens of youth gathered to watch the “Courageous” movie on the church grounds.

Crediting Randy Childers and Don Rogers, both directors of missions, as his mentors, Price said he believes the church’s comeback is due solely to God.

“This church, for many people, is a church of new beginnings,” he said.

In the past five years, Scott Church has enjoyed new beginnings of its own.