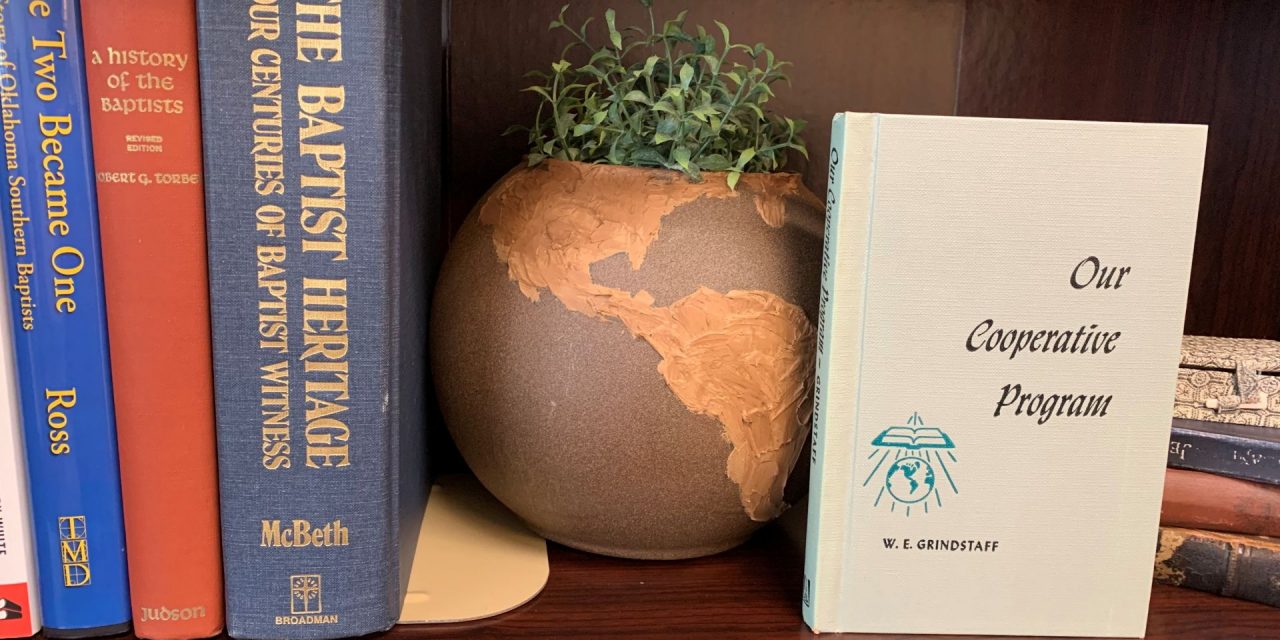 A couple of weeks ago, I found an old book inside the Baptist Building on a shelf in the “CP Closet.” That’s the hallowed place where Cooperative Program promotional materials are stored.

The pages of the old tome were yellowed and brittle. I knew I had to be careful as I cracked open the book. I opened it, and a familiar old book smell reached my nose with that unexplainable hint of vanilla scent. It was an old church study course book, and it pulled me in with the exciting introduction

I felt a little like Hilkiah (2 Kings 22) the high priest who found the Book of the Law in the temple. Surely this forgotten book has something important I could learn.

The book was called “Our Cooperative Program” (CP) written by W.E Grindstaff and published in 1965 by Convention Press, Nashville.

The book is all about the CP! As the Cooperative Program brand ambassador for Oklahoma Baptists, W.E Grindstaff (an Oklahoma Baptist University graduate and former pastor in Shattuck and Mangum) had me at “hello!”

The author summarized the importance of the CP in an opening chapter:

“The Cooperative Program is a voluntary plan of cooperation in world missions which Southern Baptists created in 1925 and still control. A practical plan for meeting human need, it is democratic in design, flexible in nature and economical to operate. As a budget for most denominational work, it is the main channel for financing state convention and Southern Baptist Convention (SBC) work. As an appeal for most denominational causes, it has eliminated numerous special offerings. It is the best means for regular and continuing financial support of all cooperative enterprises.” (page 15)

Do you need a refresher on how and why the Cooperative Program was started? Watch this video

“Okay, Mr. Grindstaff, we’re off to a good start,” I thought as I continued to read. What he said about the CP still rings true today as I am sure it did 55 years ago. The success of the Cooperative Program is the “best means” to the continued health of Southern Baptists missions and ministry.

“What will determine the future of the Cooperative Program? It will probably be determined by continued confidence, deepened spiritual vision, growth in stewardship and whether Baptists use it or designate it to favored causes.

“Special offerings become necessary when Southern Baptists do not adequately support all their work through the Cooperative Program. The channel provided is adequate only when used. Do church members want to be swamped in a deluge of special appeals as before in 1925? If not, they will use the channel provided. Its proper use will require more emphasis on the Cooperative Program.

“The Cooperative Program offers opportunity for balanced support of all work. Its chief disadvantage is that church members sometimes lose the feeling of having part in a definite work. They fail to see all cooperative work as supporting a total missions enterprise.

“How can Baptists place more emphasis on the Cooperative Program? They can give it as much attention and prayer as they now give special offerings.

“When special offerings increase more rapidly than Cooperative Program gifts that have been basic in Baptist growth, there may come a serious imbalance.

“If Baptists neglect the Cooperative Program, it could become a secondary rather than a primary aspect of world missions.

“The number and intense pressure of special offerings must not be increased so as to destroy the Cooperative Program. Baptists cannot afford to have this plan become a minor expense account for Kingdom work instead of its chief support. If Baptists neglect the Cooperative Program, it could become a secondary, rather than a primary aspect of world missions.

“When church members are shown only a part of missions, their limited outlook may lead them to designate to the part rather than supporting the whole missions program.

“Unless Baptists increase financial support to meet more nearly all missions needs within the Cooperative Program, they may commit denominational suicide.

“The Cooperative Program’s future is unlimited as long as church members understand that all of it is essential to world missions.”

I can’t add more emphasis to what has already been said by Grindstaff—back in 1965 when he gave Southern Baptists a plan for how to avoid “denominational suicide.”

If the CP becomes secondary and can’t support the majority of our work, these ministries would be forced to raise funds. It wouldn’t be long until all the ministries of the convention would have to have “special offerings” and would have to make fundraising their constant focus. Churches would be inundated with requests by fundraisers to speak in churches, as well as emails, letters and other promotions asking for money.

This sounds like a recipe for denominational decline and reduced impact. I pray we take W. E. Grindstaff’s advice today.  Let’s strengthen the CP!

Learn more about how you can be a CP Ambassador for your church at oklahomabaptists.org/cooperative-program/ambassadors