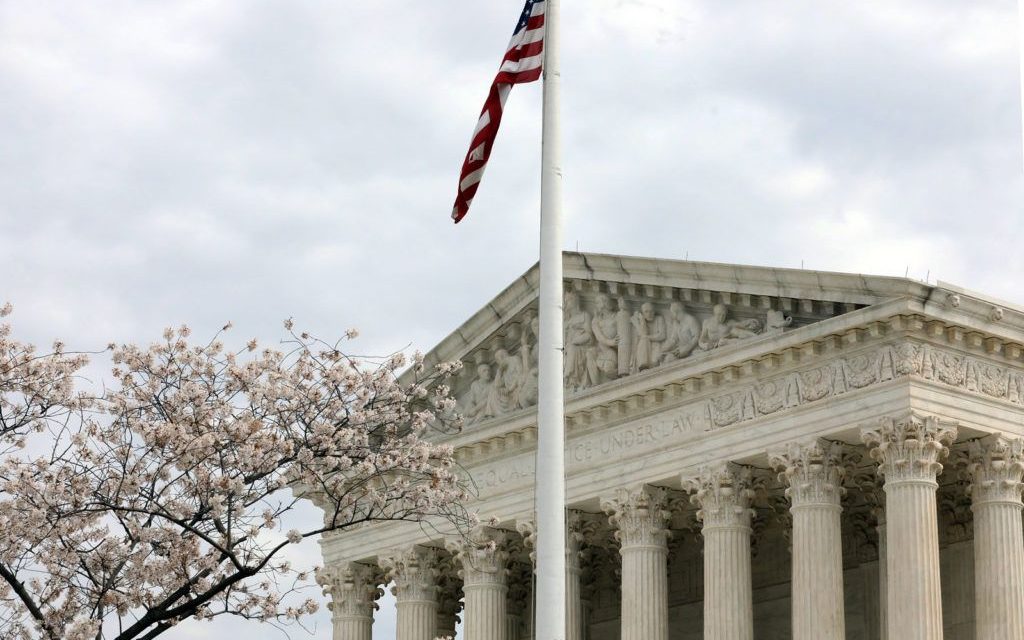 WASHINGTON (BP)—Pro-life advocates reacted hopefully to the report of a leaked draft opinion within the U.S. Supreme Court that would overturn its 1973 Roe v. Wade decision legalizing abortion nationwide.

In a stunning development Monday evening, May 2, Politico—a politics- and policy-focused news organization—published a copy of a draft of an opinion by Associate Justice Samuel Alito that would strike down the Roe ruling if it becomes final. A source familiar with the court’s work said four other associate justices—Clarence Thomas, Neil Gorsuch, Brett Kavanaugh and Amy Coney Barrett—sided with Alito in a conference vote after oral arguments in December, Politico reported in an article that include a link to the draft. They remain united on the opinion as of its report, Politico said.

The opinion leaked apparently from within a court that is highly secretive about its proceedings regarding a Mississippi ban on abortion after 15 weeks’ gestation. The state, as well as the Southern Baptist Ethics & Religious Liberty Commission (ERLC) and other pro-life organizations, had urged the high court not only to uphold the 15-week prohibition contested in the case—Dobbs v. Jackson Women’s Health Organization but to overturn Roe and the 1992 Planned Parenthood v. Casey opinion that affirmed that decision.

Roe was an “abuse of judicial authority,” Alito wrote in the leaked draft, which included a note that it was circulated Feb. 10 to the other justices. “Roe was egregiously wrong from the start. Its reasoning was exceptionally weak, and the decision has had damaging consequences. And far from bringing about a national settlement of the abortion issue, Roe and Casey have enflamed debate and deepened division.”

If the high court overturns Roe and Casey in its final opinion, the ruling would return abortion policy to the states.

In a news release Tuesday morning, May 3, the Supreme Court confirmed the draft opinion is “authentic,” but “it does not represent a decision by the Court or the final position of any member on the issues in the case.”

In the release, Chief Justice John Roberts described the leak as a “serious and egregious breach” of the trust of the high court. He has ordered the marshal of the Supreme Court to begin an investigation into the source of the leak, Roberts said.

Justices may change their votes before a final opinion is published. Such a reversal reportedly occurred after an initial draft reversing Roe was circulated among the justices in the Planned Parenthood case.

Five justices voted in conference after oral arguments in Planned Parenthood to strike down Roe, and Chief Justice William Rehnquist sent the court’s members a draft opinion in late May 1992 that would have done so, the late Associate Justice John Paul Stevens said in a 2019 memoir, according to The Washington Post. Associate Justice Anthony Kennedy reversed course, however, and joined in a late June ruling that upheld Roe while permitting some state restrictions.

Southern Baptist and other pro-life supporters expressed prayerful hope the justices in the majority will stand firm in their decision to overturn Roe. They also encouraged followers of Jesus to prepare to aid vulnerable women if the opinion holds.

Ed Litton, president of the Southern Baptist Convention, said in a written statement provided to BP, “Christians have sought the end of Roe for nearly 50 years. We must pray now for the resolve of the Court to cement its reversal.

“At the same time, the church must stand ready to love, serve and support women and families in need,” said Litton, senior pastor of Redemption Church in Saraland, Ala. “Let us thank God for the possibility of seeing the specter of this unjust ruling removed from our nation forever. And let us prepare for the next phase of pro-life ministry.”

Brent Leatherwood, the ERLC’s acting president, described it as “a breathtaking development in every sense of the phrase.”

“Assuming it truly remains a majority opinion —which could still change—it means we are one step closer to ending the Roe-Casey abortion framework that has taken more than 60 million innocent lives, fractured families, marginalized mothers and harmed this nation for nearly 50 years,” he said in written remarks for BP. If this majority holds, witnessing a day where that regime is ended cannot come soon enough.

“By overturning the Roe-Casey precedents and eliminating the number one factor inhibiting pro-life laws from taking effect, our nation can begin to establish a true culture of life by giving states the freedom to pursue policies that protect preborn children. Christians should be in earnest prayer for such a moment to be reality.

“At the same time, we must avoid losing sight of mothers who are in a cycle of fear or maybe even in crisis at this moment,” Leatherwood said. “(O)ur words in this moment should not be ones of mere celebration, but also of care. Our care must alleviate their fears and show that the welfare of mother and child do not have to be pitted against one another.”

Leatherwood urged the Supreme Court “to move with all deliberate speed to finalize and publish this decision as soon as possible. (I)t would show, despite their differences, these justices will not be bullied by those seeking to operate outside of its established processes. So I will be praying for each justice and their safety, for this majority to hold firm for life and for them collectively to have the fortitude to withstand the torrent of criticism that is likely coming their way.”

Elizabeth Graham, the ERLC’s vice president of operations and life initiatives, said she is hopeful about the potential ruling and “optimistic because I think there is a shift happening in our culture that is moving to a holistic view of life – where every human life is protected because they are created in God’s image and have inherent dignity and worth.

“It is not enough to make abortion illegal; we must work to make abortion unnecessary and unthinkable,” she said in written comments for BP. “This means we must address the underlying reasons why a woman believes she has no other option but to choose abortion. So regardless of what the Court decides, I am hopeful the church will continue serving abortion vulnerable women, as it’s done for many years.”

Chelsea Sobolik, the ERLC’s director of public policy, told BP in writing, “If the disastrous precedents set in Roe and Casey are indeed overturned, and they should be, there will be growing numbers of vulnerable women and children in need of care and support. The church must continue to stand on the frontlines of caring for women and children.”

In the leaked draft, Alito said Roe and Casey “must be overruled. The Constitution makes no reference to abortion, and no such right is implicitly protected by any constitutional provision, including the one on which the defenders of Roe and Casey now chiefly rely,” the 14th Amendment’s Due Process Clause.

“On many other occasions, this Court has overruled important constitutional decisions,” he wrote. “Without these decisions, American constitutional law as we know it would be unrecognizable, and this would be a different country.”

As an example, Alito cited the 1896 Plessy v. Ferguson decision that upheld racial segregation through what became known as the “separate but equal” doctrine. The high court basically and finally overturned the ruling in 1954.

“Roe was on a collision course with the Constitution from the day it was decided, and Casey perpetuated its errors, and the errors do not concern some arcane corner of the law of little importance to the American people,” Alito wrote. “Rather, wielding nothing but ‘raw judicial power’”—quoting from Associate Justice Byron White’s dissent to Roe—“the Court usurped the power to address a question of profound moral and social importance that the Constitution unequivocally leaves for the people.”

If the Supreme Court overturns Roe, 26 states are certain or likely to prohibit abortion, according to the Guttmacher Institute, a research and policy organization affiliated with the abortion-rights movement.

Nine states have enacted a total of 33 pro-life laws so far this year, Guttmacher reported April 15. Among those are a near-total prohibition on abortion and bans at different stages of pregnancy. In addition, seven states have enacted 11 abortion-supporting laws in 2022, according to Guttmacher’s April 15 report.