LAWTON—The story in II Kings 4 about Elisha and the widow’s oil is an inspiring example of God’s provisions. The widow approached the prophet with a crisis of not having the money to pay the creditor who was going to take her two children to be his slaves.

Elisha asked the widow what she had in her house, and the only thing she could offer was a jar of oil. He told her to get as many empty jars as she can and pour oil into all the containers.

The widow kept pouring until there were no more jars. She went back to Elisha to share about her abundance, and Elisha told her to sell the oil to pay off her debt and live off the excess.

Old Testament stories like this seem hard to grasp. People don’t think such miracles like the widow and the oil can happen today. But ask Pastor Harold Gaches and members of Lawton, First West if they are skeptical of God working through limited resources. From what they experienced in the past year and a half, God was able to provide the church a new building below the estimated cost and earlier than anticipated. 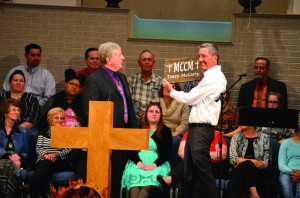 Pastor Harold Gaches, left, presented Terry McCarty a sign for his business. McCarty was hired to do the building construction.

In February, 2013, Lawton, First West began to build a major addition to its existing building. The two-floor facility provides space for offices, a Fellowship Hall with kitchen, 25 classrooms, a conference room and a new entrance that includes a welcome center.

Gaches said all of these additions were greatly needed, especially the classroom space, as the church had three Sunday School classes meeting in the sanctuary and two classes meeting off campus. The building project had an estimated cost of $3.2 million, and the church raised a little more than $1 million and received a significant loan from the Baptist Foundation of Oklahoma.

Adding to this blessing was a group of 14 Baptist Builders from the southeast part of Oklahoma who helped with both the upper and lower levels. “We had several work days where we had up to 40 people working all day,” Gaches said.

Terry McCarty was hired to do the construction of the new building, and he told the pastor they were going to be about $600,000 short toward having the second level completed. Pastor Gaches went to the building committee with this report, but the committee prayed and concluded it was best to “stick with God’s plan” and see what He was going to do. 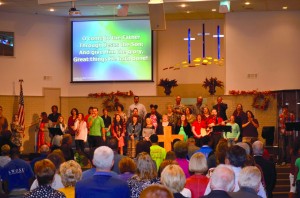 Church members sing “To God Be The Glory” during the dedication service.

With church members and Baptist Builders contributing to the labor, as well as purchasing resources in bulk to keep costs down, McCarty came back to Gaches a few months later and said they were now $300,000 short. Though the idea of increasing the loan was tempting, Gaches said they remained faithful to seeing how God could work.

As the church continued with the financial plan and with the extra manpower, Gaches said, “In May, Terry came to me and said, ‘Pastor, we are going to be able to finish. If you let me focus on the upper level, we will be able to finish with the money you have plus the money coming in.’

“We have not pulled all of the money from the Foundation,” Gaches continued, “and with God’s blessing through our people working so hard and saving hundreds of thousands of dollars, we were able to completely finish under what we had estimated for the lower part of the building. Terry said it usually doesn’t happen this way. We just give God praise and glory. “

On Oct. 12, Lawton, First West had a dedication service for its new addition. Former pastors Lynn Snyder, Wilford Wisel and Jamie Powell offered words of appreciation through letter or video. Leaders of the building project, including McCarty, were recognized for their efforts. A lunch in the new Fellowship Hall was enjoyed by all who attended.

Gaches made it known in his message that day Who was responsible for their building being completed almost a year before the projected date. As he spoke from I Kings 8:54-56, he said, “Short of God, we could not have done this. This is all about Him. This would not be done without God’s blessing. He has met all our needs and will draw people to Himself. I believe He is not finished drawing people of Lawton to us, and ultimately to Himself.”

Just as God blessed the widow, He continues to bless today.