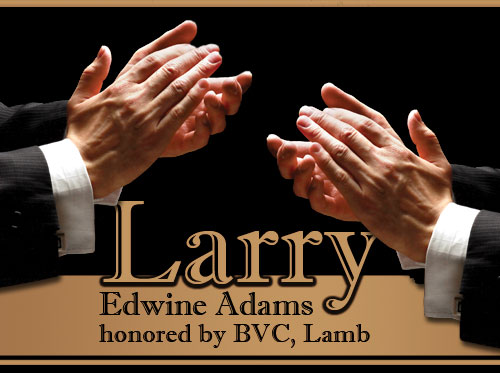 The Basketts were instrumental in establishing the first Baptist Village in Hugo 54 years ago, tirelessly sacrificing their time and resources. They donated 68 acres of land and wrote an $18,000 personal loan for the construction of the Village. Mrs. Baskett tore up her featherbed to make pillows for residents. They brought eggs by the case and donated 150 hens. They even sacrificed S&H green stamps to purchase Village utility carts.

Will and Nora Baskett established the ultimate legacy that lives on in BVC. That same spirit of ministry can be found in Larry and Edwine Adams.

BVC presented the Adamses with the 2012 Will and Nora Baskett Legacy of Love Award at BVC’s Feb. 12 Board meeting. This marked only the third occasion BVC has recognized someone with this prestigious honor. The Adamses join previous recipients Robert and Faye Griffin and Bud and Joyce Evans.

Larry Adams faithfully served BVC for many years as both campus director at Baptist Village of Oklahoma City and BVC’s vice-president—development. A talented and experienced fundraiser, he led a capital campaign that far exceeded BVC’s goals.

He also planned and organized an annual fund effort, which is now carried out on a yearly basis. He was instrumental in developing numerous friends of the BVC ministry. For his and Edwine’s influence and efforts, the Larry and Edwine Adams Assistance Fund was established by BVC in their honor.

Larry and Edwine have followed in the tradition of Will and Nora Baskett, transforming senior adults’ lives through ministry and service.

In addition to BVC’s honor, the couple also were presented with a citation by Oklahoma Lt. Gov. Todd Lamb.