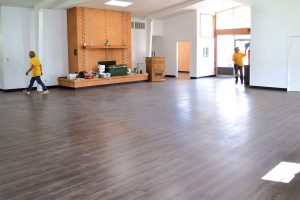 The interior of the newly renovated Langston University BCM building after cosmetic as well as structural improvements on the flooring, ceiling and walls.
[Photo: Chris Doyle]

LANGSTON—Major improvements at the Langston University Baptist Collegiate Ministry (BCM) building have stirred up excitement around the college campus and in the nearby community.

“We did a two-day cleanout and filled up two 30-foot dumpsters with just stuff,” Freeman said. “A lot of it has been furniture that has been passed on. The tables and chairs have been worn out.

“Disaster Relief has been able to come in and repair all the damage that had been neglected over the years. There was a lot of weather damage—roof, doors, windows. Of course, when you’ve got a leaky roof you’ve got ceiling problems. Now, we have no leaks. Everything has been taken care of.”

Volunteers painted the walls and ceilings, put in new lights and new flooring.

The new look also includes new audio and video equipment, which, Freeman said, the Langston BCM has never utilized previously. With the potential of larger number of students coming to weekly BCM events, the updated amenities will be useful.

“I’m very excited about how the progress is going at Langston,” said Cris Lowery, BGCO collegiate ministries specialist. “Everything has come together really well. The remodeled building will provide a fresh start.” 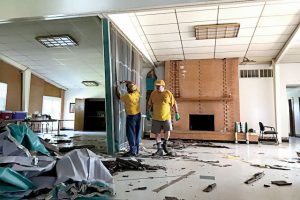 Word is getting out about the Langston BCM makeover, and curiosity is drawing.

“Students are going to be far-more attracted to go,” Freeman said about the Langston BCM drawing interest. “We’ve had some students dropping by to visit. A lady from the community dropped by. Part of what I’ve seen is that building is connected to the people of Langston. We’ve had many stopped and say ‘I’m a graduate of Langston. I’m a BSU product (referring to the former Baptist Student Union moniker).’”

Lowery also is encouraged by the work done by Bertholomew “Prophet” Bailey, the new Langston BCM director. “Prophet has been doing a really good job of connecting with students and letting them know that we’ve got some things coming,” Lowery said. “He feels like a really good number of students will show up for the kickoff luncheon.”

The kickoff luncheon for the Langston BCM is scheduled for Noon, Oct. 31 and will include an official dedication. Those expected to be in attendance include Hance Dilbeck, BGCO executive director-treasurer, and Anthony Scott, president of the Oklahoma Baptist State Convention (OBSC). Langston BCM is a shared ministry of the BGCO and the OBSC.

The Oct. 31 event also will have a time to honor the volunteers who worked tirelessly the past four months to give the Langston BCM a new look.

“Oklahoma Baptists desire to meet physical needs, so that they can share the hope of eternal life in Jesus Christ,” said Don Williams, state director of Oklahoma Baptist DR. “The work at Langston not only provided a newly renovated place for students to meet, but will also have an eternal impact on many students at Langston. To God be the Glory!”