Eugene Peterson, creator of ‘The Message,’ dies at 85 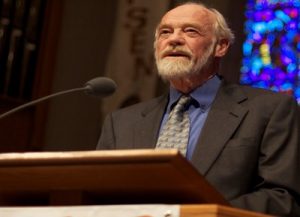 Pastor of Christ Our King Presbyterian Church in Bel Air, Md., for nearly 30 years, Peterson published more than 30 books on biblical spirituality, pastoral theology and Christian living, including his 2013 memoir “The Pastor” and “A Long Obedience in the Same Direction.”

Less than a week before Peterson’s death, news broke he had been placed in hospice care amid struggles with dementia and congestive heart failure.

Upon his death, his family said in a statement, “Among his final words were, ‘Let’s go.’ And his joy: my, oh my; the man remained joyful right up to his blessed end, smiling frequently. In such moments it’s best for all mortal flesh to keep silence. But if you have to say something say this: ‘Holy, Holy, Holy.’

“It feels fitting that his death came on a Monday, the day of the week he always honored as a Sabbath during his years as a pastor. After a lifetime of faithful service to the church — running the race with gusto — it is reassuring to know that Eugene has now entered into the fullness of the Kingdom of God and has been embraced by eternal Sabbath,” his family stated.

Former Southern Baptist Convention President James Merritt tweeted, “Eugene Peterson is with the God he loved and served in a magnificent way.”

When Peterson entered hospice care, author and speaker Beth Moore tweeted, “Don’t you just sorta hope when Eugene Peterson finally sees the gorgeous, glorious face of the Savior he has so long loved and served, that Jesus is the type that might greet him with something from The Message translation? Like, maybe John 21:12? ‘Breakfast is ready.'”

Last year, Peterson told Religion News Service he didn’t think death was “anything to be afraid of.”

“I have no idea how it’s going to work out,” Peterson said of death. “But I’m not afraid, I’ll tell you that. I’ve been with a lot of people who are dying. I think those conversations are some of the best I’ve ever had. These are people who have lived a good life and who have embraced their faith. They’re not afraid.”

At times, Peterson was the subject of theological controversy, as when he said in a 2017 interview he didn’t believe homosexuality was sinful — a statement he later retracted.

A funeral service for Peterson is scheduled Oct. 29 at First Presbyterian church in Kalispell, Mont., and will be livestreamed, according to Christianity Today.