Kicking up ministry a notch 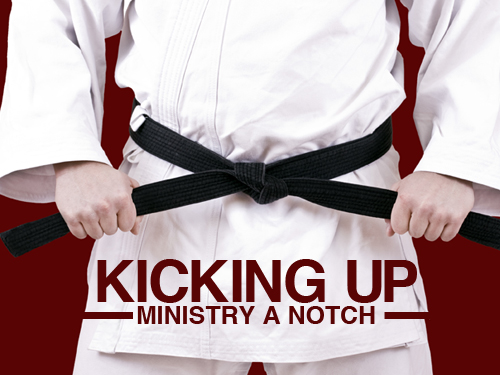 Sounds dangerous, but Brandon Boozer believes it is valid.

Boozer, a member of Moore, First, is a martial arts instructor who donates his time and ability to give kids, as well as their parents, free lessons in martial arts training at the church’s gymnasium.

“It’s valuable for kids who need a sense of direction, a sense of purpose and a certain level of responsibility,” said Boozer.

He emphasized that karate is not a class in fighting, but a class in not fighting. And the students are not just learning kicking and punching or self-defense, they are also learning Scripture as they go.

“Anyone can kick and punch,” Boozer noted. “But with proper discipline, you can acquire the control necessary to avoid a threatening situation, to deter a physical confrontation or, if absolutely necessary, use discipline and training to control a situation. Fighting is a last resort.

“You can, through discipline and training, find yourself being able to do things that you did not think possible.”

The program, Karate in Christ’s Service (K.I.C.S.) was developed by Boozer and his father, Jim, who has a similar program at a church in Arlington, Texas.

Boozer grew up with the sport, with his whole family being involved; thus the emphasis on family participation.

“We have a lot of families, moms and dads and their children, mother-daughter, father-son combinations,” Boozer related.

Boozer said they now also offer Tai Chi, which is a kind of opposite of Tae Kwon Do, which is a high impact sport.

“Injuries are very low in Tai Chi,” he explained. “It’s a family friendly sport. Tai Chi is what you see Chinese people doing in parks sometimes—moving slowly from side to side, moving their arms around. It’s good for people who have joint issues. It’s like greasing your joints when you get older. It keeps you moving.”

With that in mind, Boozer said the class is open for all ages, from 8 to 98 and includes all levels of expertise.

Students have the opportunity to move from the beginner’s white belt all the way to black belt status.

Each belt comes with Scripture.

Respect is taught with the white belt (Prov. 13:13); patience with the gold belt, which involves memorizing one of several Bible verses; perseverance with the orange belt (Phil. 4:13); focus/attention with the green belt, which includes memorizing two Bible verses; teacher with the blue belt (Matt. 5-7—Sermon on the Mount and any other examples of Jesus teaching others); and with the four levels of brown belts—control/humility (book of Job); vision/I will (Ex. 3-14—Moses leading Israelites out of Egypt); armor of God (Eph. 6:10-17) and wisdom.

Black belt candidates must read Proverbs and seek wisdom from God, Boozer said, and explain to the testing board what Proverbs means to them and what insights and wisdom they have gained from their studies in both Tae Kwon Do and the Bible.

Boozer said one of his dreams is to have well run, organized, respectful church tournaments, where one of the goals is to invite people to church.

“If they are run by a church, you can open in prayer and use it as an outreach,” Boozer said.

Boozer said he goes to church for spiritual reasons, and karate is his physical purpose.

“In terms of financial impact, in terms of bringing new people into the church, this is a significant program,” Boozer noted. “Through this program, we’ve had people who have come to church, heard about God for the first time and have since become Christians. We take time in our classes to talk about the Word.”

Boozer said the karate instruction is a kind of side door to the church, not a traditional front entrance.

A prime example of the success of the ministry is Mark Solecki, who had given up on church many years ago.

Solecki, divorced with a 16-year-old son living in Dallas, said he was vicious, bitter and angry at God.

“Our son had been through multiple heart surgeries, and I got him into Tae Kwon Do to strengthen his muscles,” Solecki said. “I told him I would also get into karate, if he would keep it up.”

However, martial arts classes are expensive, and Solecki, with the expenses of his son’s surgeries, wasn’t able to afford the classes for himself.

He was working out at a gym, which was undergoing renovations, when someone told him about the free gym at Moore, First.

“While working out here, I found out about the free karate class, and started coming,” Solecki said.

After about a year, he was talked into visiting a worship service.

“A lot of things went wrong in that service,” Solecki recalled. “Pastor Kevin (Clarkson) joked, ‘If you don’t like organized religion, this is the place for you.’ I liked that.”

“My life took a complete 180 turn because of this karate class,” said Solecki. “I’ve seen kids come in here and do the same thing. They develop friendships, camaraderie and trust in people. Some of these kids would be on the street. A lot are from split homes and can’t afford a program like this.”

Cedric Hardimon, Moore’s recreation outreach director, said the program is offered free in the hope to have an opportunity to minister and witness to people.

“I describe it as a front porch approach,” Hardimon explained. “You invite people to the front porch and eventually you can get them into the house.

“Brandon does a great job, keeping Christ first, but using karate as a platform to share the Gospel and to reach families.”

For more information about the karate program or how your church can be involved in a similar program, call 405/735-2527.