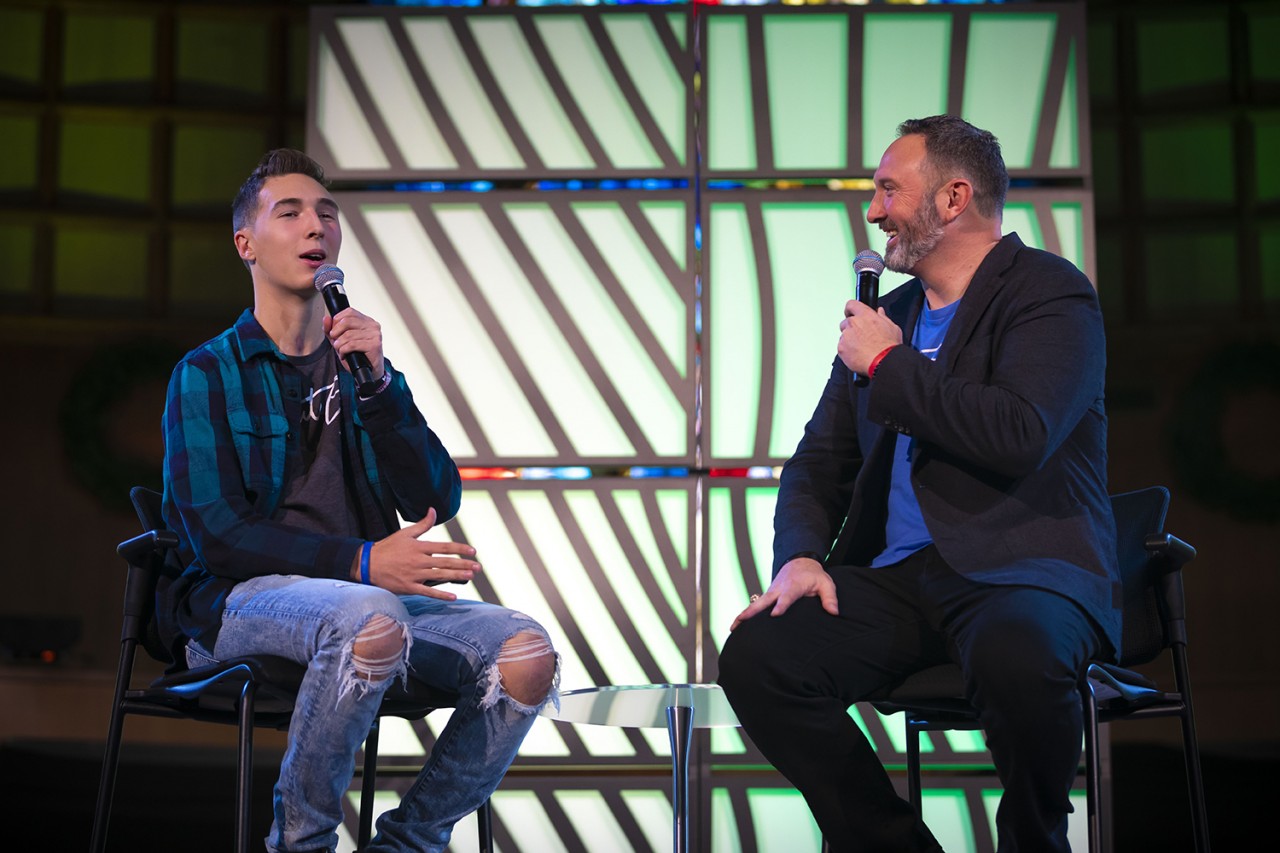 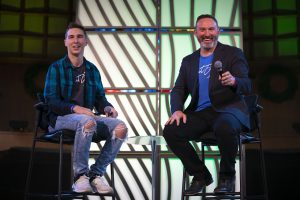 Caleb Freeman, left, and his father, Jeremy Freeman, OBU alumnus and pastor of Newcastle, First, share the miraculous story of Caleb’s healing and he is using that to tell others about Jesus. OBU photos by Heather Hamilton.

On Dec. 19, 2017, Caleb and his brother Clayton were driving to the University of Oklahoma to see a basketball game. They were in a tragic car accident where Caleb was injured so badly that doctors were calling it a miracle if he made it through the night. He was left paralyzed and in a coma for eight weeks. Caleb began to slowly communicate 10 weeks after the accident. He spent the next month in multiple facilities from Colorado to Nebraska, regaining his ability to talk and participating in extensive physical therapy to retrain his body to walk and do other things.

“Our son was in critical condition,” Jeremy said. “However, we know that the Lord was using Caleb’s journey for His glory. This journey now gives us the ability to tell everyone about how God healed Caleb.”

A year after his wreck, he enrolled back at Newcastle High School using a walker, his mobility severely limited. This fall, almost two years after the wreck, Caleb, once the number one runner on his cross-country team, rejoined the team and completed his first race since the accident.

“Before the wreck, I was straying from the Lord,” Caleb said. “I believe God used this wreck to pull me back to Him for His glory. If it weren’t for the wreck, I wouldn’t have ever had the courage to speak to crowds.”

Caleb’s rehabilitation process is not finished, and he works every day to become stronger. Caleb and his family explain the miraculous progress he has made this far with the hashtag #ButGod. Caleb has far exceeded expectations, given his extensive injuries. At every turn in his progress, the Freemans say that there is no other explanation than “But God.”

“This saying means so much to me,” Caleb said. “Many thought I would never be able to do anything again, but God is the one who ultimately has a say in that.”

Together, Caleb and Jeremy Freeman have been asked to speak at numerous places to share their story and how the love of God has impacted their lives. Caleb has made it his mission to tell others about God and His healing powers. As he continues to meet milestone after milestone since the night that changed his life almost two years ago, his family asks that people continue to pray faithfully for complete healing of Caleb’s body, and to always remember, #ButGod.

To view this or other chapel messages, visit www.okbu.edu/student-life/spiritual-life/chapel-messages.