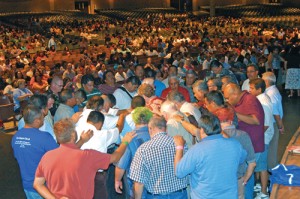 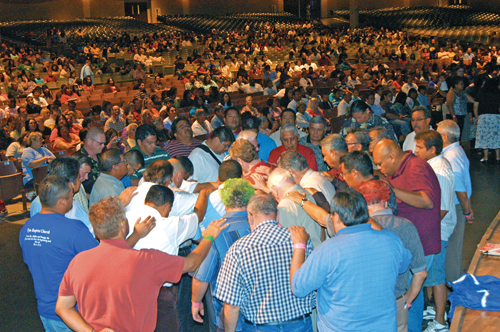 DAVIS—Indian Falls Creek, in its 62nd year, recorded 399 decisions, the second largest total ever. That included 223 professions of faith, the second largest number in history; 39 for special service/missions, an all-time high; 99 rededications and 38 other decisions/prayer. Attendance reached 2,313.

Preaching this year was Anthony L. Jordan, executive director-treasurer of the Baptist General Convention of Oklahoma, who was also honored by the state’s Indian congregations in a special ceremony Thursday night for the work he has done in behalf of Oklahoma Baptists.

As campers looked on, Indian leaders gathered around Jordan, and their wives surrounded Jordan’s wife, Polla, to lift them up in prayer.

Earlier, Jordan told the campers that God had a divine appointment for many of them.

“In 1950, Jimmy Anderson (state Indian leader and pastor of Many Springs Indian Church in South Canadian Association) came to Falls Creek,” Jordan said. “His life was going in a different direction, but he surrendered to full-time Christian service. Some of you have a divine appointment with Jesus tonight.”

Preaching from Matthew 18:21-35, Jordan said the measure of forgiveness is as Jesus showed us, not as someone else does it.

“This story is about a king who forgives a slave an incredible, unpayable debt,” Jordan said of the Scripture passage. “The king is Jesus, and the slave is every one of us in this room tonight. We owe a debt we cannot pay. Jesus paid a debt He did not owe. Sins’ wages are spiritual death—a death that never stops.”

Jordan noted most people understand what sin is, but don’t grasp the significance of the word.

“Simply said, we have missed the mark,” he explained. “We are incapable of living a life without sin. God wants us to live holy, and we keep veering off the path. We are sinners, and we are constantly missing the mark before a holy God.”

He added we are all guilty before God, doomed and damned because of our sin.

“Scripture says our righteousness is as filthy rags in the sight of a holy God,” he said. “We have sinned to the highest heavens, and our only hope is to fall on our faces before God and declare we are sinners and ask His forgiveness.”

Jordan emphasized that when we are willing to confess our sins, He runs to us.

“Jesus gathered up our sin debt and took it to the cross and nailed it there,” Jordan declared. “God says our debt is now paid in full by the blood of His Son, Jesus.”

But, Jordan continued, Jesus didn’t stop the story there. He goes on to tell of one who has been forgiven and is unwilling to forgive.

“Those of us who have been forgiven must be willing to forgive,” he said. “You can’t receive His forgiveness if you don’t forgive like He forgives.”

Jordan said he believes the number one sin in the church is the sin of unforgiveness.

“We live with broken relationships, breaches, bickering,” he said. “We have to be willing to forgive anybody anything. If God is going to send revival through Native Americans, as Henry Blackaby has said, it is going to require us to do it God’s way—forgive people and move on.”

To illustrate, Jordan told of a woman in a revival service he was preaching in Tulsa.

“She was an attractive, older Indian woman, and I could see God was doing something in her heart,” Jordan recalled. “I preached on forgiveness, and after the service, she told me her first husband abandoned her and her second husband left her when she had cancer and was greatly in debt. She said until tonight, she had been unwilling to forgive them. That woman didn’t walk out of that church, she floated out.”

This was the 62nd year of Indian Falls Creek, and Jordan announced a history of the Native American gathering is in the works. Mike Thompson, professor of religion at Oklahoma State University, has been asked to write the history of the camp.

“Thompson holds the R.A. Young chair of Bible at OSU,” Jordan said. “R.A. Young gave the first $5 million for construction of this tabernacle.”

Victor Cope, camp director and pastor of Moore, First Indian, said God did a tremendous work among all who attended Indian Falls Creek.

“I want to thank all the churches that continue attending year after year, all my board members, who labor tirelessly, and the volunteers who have assisted us for years,” said Cope. “A special thanks to Anthony Jordan for preaching to us each night. God used him greatly.”