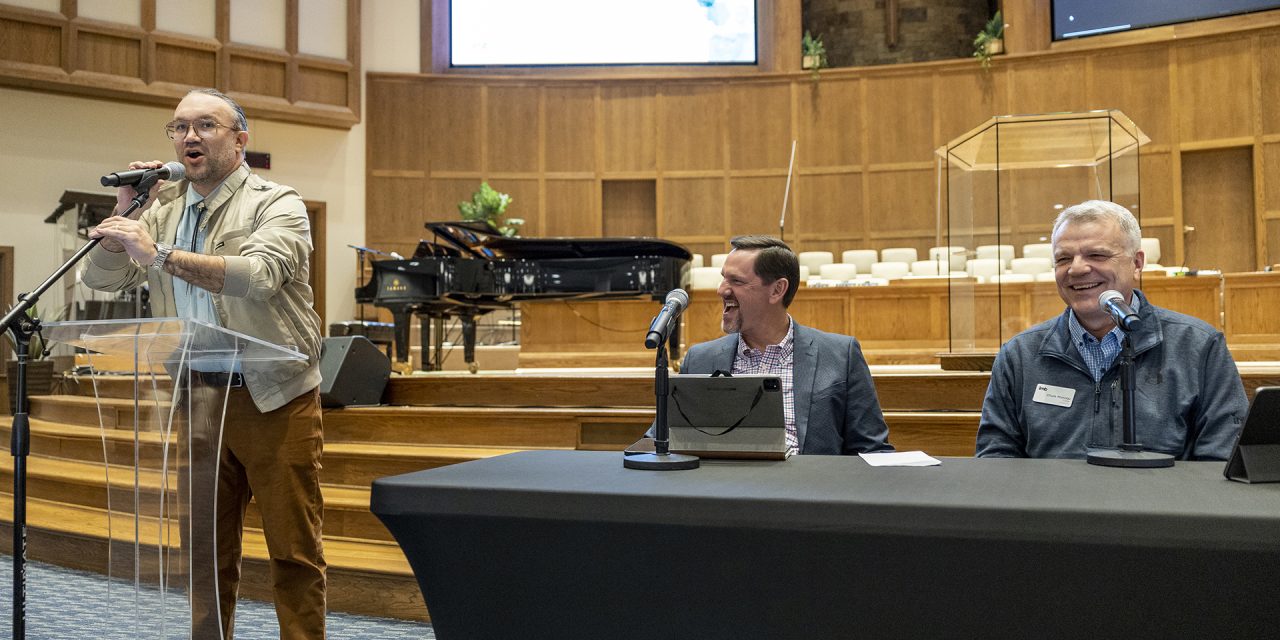 Above: IMB President Paul Chitwood, center, and Chuck A. Pourciau, right, lead pastor of Shreveport, La., Broadmoor and chairman of the IMB board of trustees, laugh during trustee Brian L. Zunigha’s, left, director of discipleship ministries at California Baptist University, presentation of updates from the training committee to the February 2022 trustee meeting at Glen Allen, Va., Mount Vernon. IMB Photo

RICHMOND, Va.—International Mission Board (IMB) trustees approved the appointment of 52 new full-time, fully funded missionaries, while also honoring the service of 80 emeritus missionaries during their Feb. 2-3 meeting in Richmond, Virginia.

Chuck Pourciau, trustee chairman and lead pastor of Shreveport, La., Broadmoor, presided over the two-day meeting, which included 53 trustees meeting in person and 17 joining online due to issues such as COVID-19 and inclement winter weather.

The new missionaries were honored during a Sending Celebration on Wednesday, Feb. 2, at Glan Allen, Va., Mount Vernon, which included a livestream option for families and church partners around the world to join in the event. Jarrett Stephens, senior pastor of Houston, Texas, Champion Forest, brought a message of encouragement to the new appointees.

‘Most important work in the universe’

In his presidential report to trustees, IMB President Paul Chitwood reflected on how the world has changed in the past two years, noting many people have lost numerous family members and friends in that time.

“What a powerful and painful reminder that the work we do together at the IMB is the most important work in the universe,” Chitwood said. “Whether from COVID or cancer or a car wreck, ‘It is appointed for man to die once, and after that comes the judgment.’ The truth of Heb. 9:27 is harder to deny in a global pandemic that has taken the lives of nearly 6 million people, and those are just the ones who got counted.” 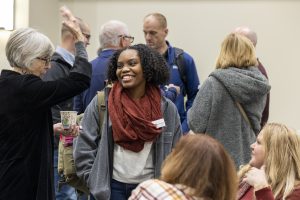 Kalaishi M. Johnson, center, IMB trustee from Mississippi, and other IMB staff and trustees, listen to Charlotte B. Madison, left, trustee from Alabama, during a break from the IMB trustee meeting at Glen Allen, Va., Mount Vernon. IMB Photo

He said that as the world finds it more difficult to ignore the reality of death, Southern Baptists have an opportunity to share the next Scripture verse in Heb. 9:28: “so Christ, having been offered once to bear the sins of many, will appear a second time, not to deal with sin but to save those who are eagerly waiting for Him.”

However, about 3,000 people groups still have no known believers among them.

“That’s why we still have a job to do,” he said. “The most important work in the universe remains unfinished. Thankfully we haven’t quit. In fact, we may be working harder than ever before.”

Chitwood said evidence reveals that support of Southern Baptists for international missionaries and for fulfilling the Great Commission is, indeed, growing:

Other areas of progress Chitwood noted:

“By God’s grace and in His favor, I believe what we are doing together at IMB is working,” Chitwood said. “The work … isn’t finished, and the vision has not yet come to pass. So we press on, until all whose names are in the Book of Life from every nation, people, tribe and language, have heard the good news.” 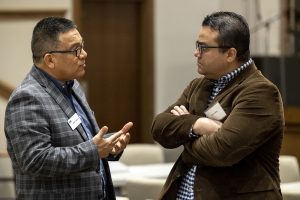 As Southern Baptists faithfully send more missionaries to fulfill the Great Commission, Chitwood has stressed the need to undergird those additional personnel with consistent, concerted prayer and ongoing generous financial support through the Cooperative Program and the Lottie Moon Christmas Offering. While applauding the recent improvements toward financial health, IMB’s Finance team notes that recovery from decades of revenue trailing inflation requires the continued generous support of Southern Baptists. IMB also is committed to ongoing vigilance in good stewardship—which is a foundational commitment in IMB’s planning and budgeting.

Price Jett, IMB’s treasurer and CFO, reported that IMB’s financials for 2021 have been audited and received an unmodified opinion, which is the highest level of confidence given by the auditors. He noted that no property sales were used for income and, as always, 100 percent of Lottie Moon offerings were used for overseas ministries.

IMB Executive Vice President Todd Lafferty recognized the lives of 92 colleagues and one missionary kid—including two active missionaries, 80 emeritus missionaries and 10 retired staff—who died in the past year. The field personnel’s lives totaled 2,206 years of service through the IMB, with an average age of 89 and an average of 28 years of service. These were “lives well-spent and invested for the sake of the gospel in reaching the nations for Christ,” Lafferty said. 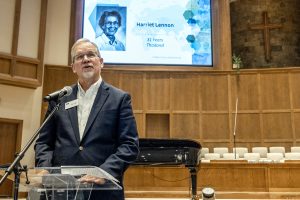 Todd Lafferty, IMB executive vice president, honors 93 former colleagues, both staff and missionaries, and one missionary kid who went to be with the Lord during 2021. Here he memorializes Harriett Lennon, age 100, who served 31 years in Thailand. IMB Photo

The current personnel’s names and the dependent’s name were not shared publicly due to security parameters.

In closing, Pourciau told trustees about three young siblings who live near him who decided to raise money for the Lottie Moon Christmas Offering®, which supports the presence of Southern Baptist missionaries overseas. The children’s mother offered her baking skills to help their efforts, and Pourciau noted that people were willing to give more than the value of the baked goods when they learned about the heart of the children’s effort.

After their sale, the three siblings walked into his office, each carrying an envelope containing $325. Collectively, the children raised $975 to support international missions. Pourciau pointed out: The resources needed for missions support exists; what is lacking, often, is the “ask.” Southern Baptists need to be asking for the financial resources required to get the gospel to the people of the world, he said, and he challenged trustees to lead out in asking for those resources.

“Most of the time, the desire to give to this work is there,” Pourciau said. “It’s the greatest need in the world. We just need to ask.”

To find out how your generosity transforms lives, visit imb.org/generosity.

The next IMB board of trustees meeting is scheduled for May 17-19, 2022, in Orlando, Fla., in conjunction with a special gathering of emeritus missionaries that happens every five years. The next missionary Sending Celebration will take place at the SBC Annual Meeting in Anaheim, Calif., scheduled for June 15-16, 2022.