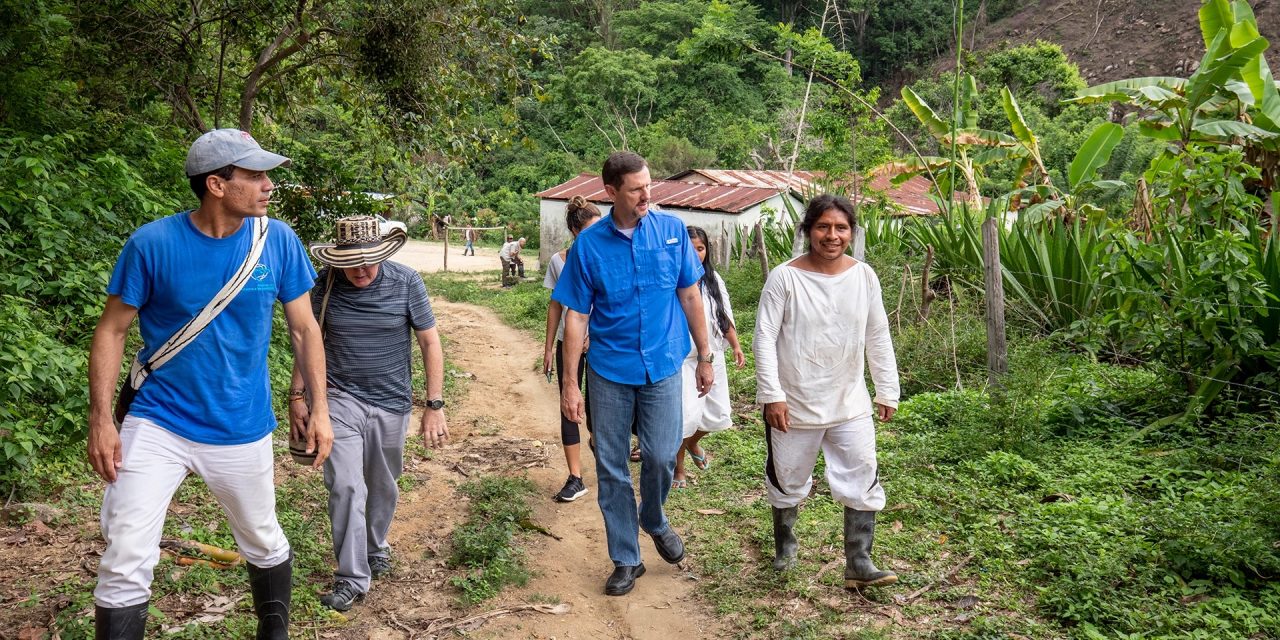 RICHMOND, Va. (BP)—The International Mission Board’s (IMB) 175 years of ministry among the nations has resulted in the formation of 140 Baptist conventions and unions in 73 countries. These conventions and unions are reaching their own people and are sending their own missionaries to spread the Gospel. These Baptists come from myriad countries spanning the globe, from the Southeast Asian nations of Indonesia and the Philippines to Spanish-speaking countries like Ecuador and Cuba. 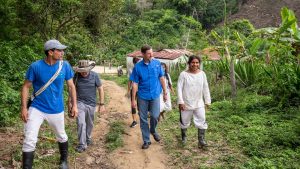 IMB President Paul Chitwood, center in blue,  in Colombia with an IMB team leader and a Cuban global missionary partner.

The IMB seeks to partner with and provide training for Baptists from these conventions and unions. Amanda Dimperio, IMB’s director of globalization, is leading the effort to provide guidance to national partners. Dimperio said the IMB defines globalization as, “Working with our national partners to help them embrace their role in the Great Commission (and) seeking to encourage and expand their capacity to send and receive cross-cultural missionaries.”

D. Ray Davis, IMB’s church mobilization manager, explained the strategy: “Instead of U.S. churches sending internationals, we’ve recognized it is healthier, more sustainable and more appropriate for IMB and our churches to invest our 175 years of experience in assessment, sending-support structures, training and strategic areas into national partners,” he said. “We provide training and guidance to local churches and conventions overseas in helping them organize to send, but we also are expanding our overseas IMB teams to include global partners as team members.”

The IMB refers to national partners serving on missionary teams as Global Missionary Partners (GMP). GMPs are cross-cultural missionaries who are affirmed and sent by a local church and sending entity in their home country. The GMPs are nurtured and affirmed by IMB personnel and work in cooperation with an IMB field team.

“A team in Africa may have IMB (U.S.-sent) missionaries and a Brazilian-sent missionary, or a Korean national may join an IMB team in North Africa,” Davis said. “This is already taking place and is gaining momentum.”

Dimperio said the international Baptist conventions that have sent the most GMPs are the Western Baptist Convention of Cuba and the Huayu International Missions Agency of Taiwan.

Five missionaries from the Huayu agency have recently been sent out to serve on IMB teams.

Cuban Baptists have four couples serving in Colombia, one in Uganda, and soon, several more GMPs will be commissioned to serve in Northern Africa and the Middle East.

“We have prayed to the Lord of the harvest to send out more laborers into His harvest field, and we see Him answering that prayer in a great way,” Dimperio said. “We are currently working with several other national Baptist conventions, mostly in Latin America, but also in Africa, Asia and Europe to help them send their first cross-cultural missionaries to serve in cooperation with IMB field teams. We hope to partner with many more in the future to share our resources of 175 years of experience, cross-cultural training and mentoring so that they can send and sustain their own missionaries.” 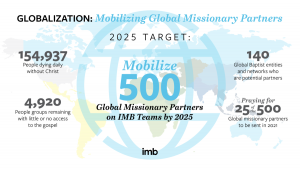 Jeff Ginn, who works with IMB’s American Peoples Affinity, said he and other leaders in the region, in conversation with local partners, set a goal of working with national partners and U.S. churches to send 75 GMPs by the year 2025.

The IMB remains committed to partner with Baptists around the world to fulfill the Great Commission and has made adding 500 global partners to missionary teams one of five target goals for 2025.

One example of the IMB’s global partnerships is in Uruguay. The Uruguayan Baptist Convention, comprising 70 congregations, 35 preaching points and 4,899 Christians, donated $1,500 to the 2020 Lottie Moon Christmas Offering (LMCO) for International Missions.

This is not the first year Uruguayan Baptists have committed to giving to the LMCO. In 2018, a Uruguayan Christian told IMB missionary Tim Kunkel that her church wanted to donate to the LMCO. She handed Kunkel an envelope with $500.

“You mean our Lottie Moon?” Kunkel asked, referring to the offering that supports IMB missionaries sent from the U.S. Kunkel is IMB’s regional ambassador for Uruguay, Paraguay and Bolivia.

The Uruguayan convention has an offering—named after a Uruguayan woman who was their “Lottie Moon”—to support Uruguayan churches and missionaries. The convention currently helps financially support three Uruguayan couples serving among unreached people groups in South America and a missionary who serves in Central Asia.

But in addition to commissioning and helping to financially support Uruguayan missionaries, the Uruguayan Baptist Convention is also committed to giving back to the IMB.

The Uruguayan Christian told Kunkel her church has given to the LMCO for several years out of gratitude because funds from the offering built her church, Young Baptist Church, located in the Río Negro department of Uruguay. Young is a city of just 16,756 people, according to a 2011 census.

IMB missionary J.D. McMurray planted the church after his appointment to Uruguay in 1945.

IMB work in the country began 110 years ago in 1911 when J.C. and Helen Quarles transferred to Uruguay from Argentina. In 1912, J.C.’s brother L.C. and his wife Jennie moved from Argentina to serve in Uruguay.

Last fall, when IMB missionaries were encouraged to reach out to encourage churches to support the LMCO, the Lord brought Young Baptist Church to Kunkel’s mind. Kunkel approached the Uruguayan Christian and her church’s pastor about their church making a donation, and then the church’s interim pastor, who is also the convention president, extended the giving request to all the churches in the Uruguayan Baptist Convention.

The amount given to the 2020 offering, $1,500, is roughly the cost of building a wood-framed church in Uruguay. Kunkel said most pastors in Uruguayan churches are bi-vocational and make around $300 a month, and he was moved at their generosity.

Chitwood expressed his gratitude for the financial gift from the Uruguayan Baptist Convention.

“I was so excited and humbled to learn that the Uruguayan Baptist Convention, one of 140 Baptist conventions and unions around the world that has resulted from 175 years of Southern Baptist work among the nations through the IMB, is giving a Lottie Moon Christmas Offering to advance that work!” Chitwood said. “While we cheer their support of the IMB, we are also grateful to have Uruguayan Baptists as partners on the ground, reaching the nations for Christ.”

To join IMB in reaching the 2025 targets or to learn more about globalization in missions, email info@imb.org. Discover the steps to becoming a missionary at imb.org/go. If you’d like to give to help prepare, train, send or support a GMP, you can donate now.