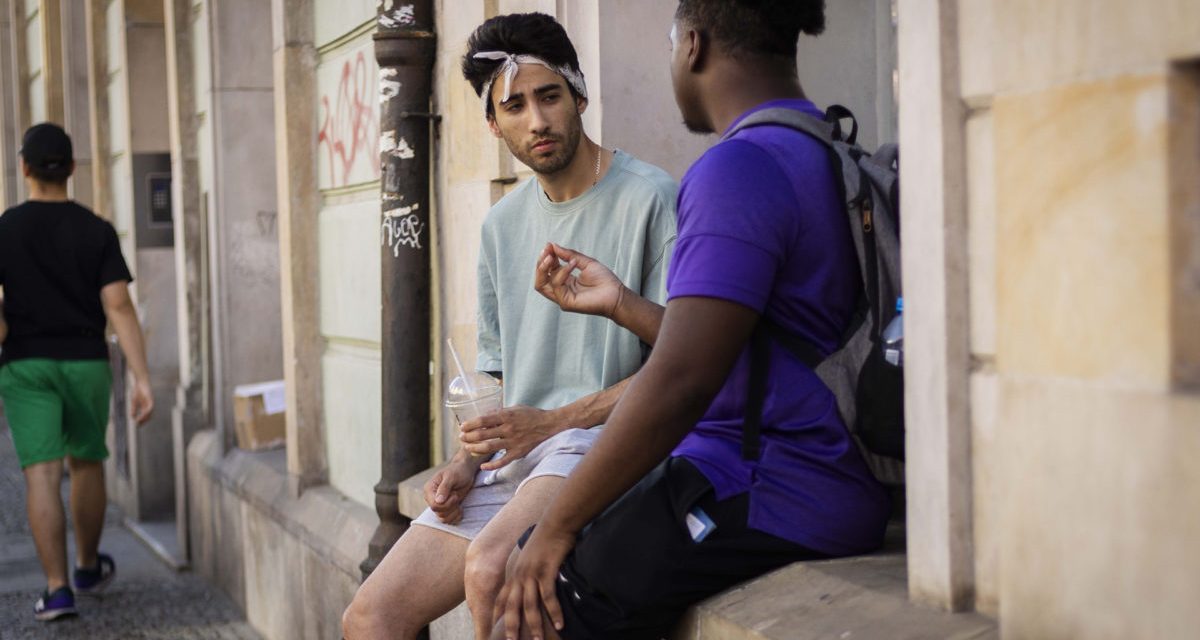 Above: Jaden Williamson, right, shares the Gospel with a Turkish young man he met on the street of Wrocław, Poland. Williamson served in Eastern Europe for a month before the invasion of Ukraine when he was evacuated to Poland. The IMB Journeyman picked up with ministry at a refugee center. It was set up to reach Ukrainians, but it also reaches out to all refugees. Often when people are away from their home culture, they are more open to talking about new ideas and the gospel. IMB Photo

When training to be a missionary, instructors and mentors emphasize the need to be flexible, even fluid. Jaden Williamson listened but never thought he’d be put to the test so early in his two-year term with the International Mission Board.

He arrived in Ukraine on Jan. 21, 2022, excited to jump into ministry, learn a language and share the Gospel message. One month later, Russia invaded Ukraine. The next day, the Journeyman missionary received the call to evacuate. 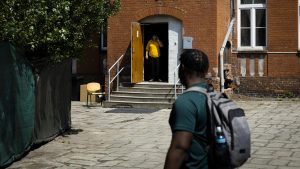 Jaden Williamson walks to work and to the steps of the Third Baptist Church building in Wrocław, Poland. Ever since evacuating Ukraine, the IMB journeyman has worked with some of the estimated 300,000 Ukrainians that also evacuated to Poland. He works in the refugee center resupplying shelves and building relationships. IMB Photo

Williamson explained when the war broke out, his supervisors called him with the news that he needed to leave the country. “So, I got on a bus across the border, then flew from there back to England,” Williamson said. He relocated to Poland three weeks later.

Instead of freaking out about entering the third new culture within two months, Williamson sat back and prayed for God to show him where the Holy Spirit was moving. To his surprise, he found that he was not alone. God already placed two of his Ukrainian team’s ministry partners in the same Polish city. The team had a new place to minister, even as a war continued in their original European doorstep.

The two teammates, Ania and Sergei, were already at work and ministering in a city that was at the height of its refugee numbers. As an English teacher, Ania directed the team’s English center before she moved to Poland. Sergei was a pastor in Ukraine.

Williamson joined Ania and Sergei in the immediate need to minister to refugees. Sergei began to manage a food and clothes distribution center, housed in a local church. Many Polish believers also responded to the call to serve refugees.

Scenes of tents or bunkbeds in church sanctuaries remain common. Months after the invasion of Ukraine, life away from their war-torn homeland is reality for thousands of Ukrainians. For Williamson, this has become his daily ministry.

“Usually, it’s like a long line outside the door,” Williamson said about mornings at the church building. “Even now, with the refugee situation changing, it’s a long line of people coming through.”

Both for those needing food or clothes and the workers in the center, the situation can be similar. Many of them left Ukraine so quickly they don’t have much identification or documentation.

According to Sergei, many of the Ukrainian volunteer workers at the center are highly educated. One is a doctor but doesn’t have the credentials to practice in Poland. So, she serves refugees. Many of these workers are not believers. For one event, Williamson was asked to wear a costume and entertain any children that attended, but when no children attended, he spent the time sharing the Gospel with a fellow volunteer.

“It’s amazing to see how God is working in their lives,” Williamson said about the way many Ukrainians have responded to the Gospel. Since he started working at the center, close to 40 people have not only chosen to follow Jesus but to be baptized as well.

“Sunday, it was like at least 20 people up there,” the Journeyman said, shaking his head at the results of his abrupt change in ministry. “Just seeing how God is working is amazing!”

*Some names have been changed for security.

Kelvin Joseph is a contributing writer for the IMB, serving among European peoples.

View all posts by Kelvin Joseph