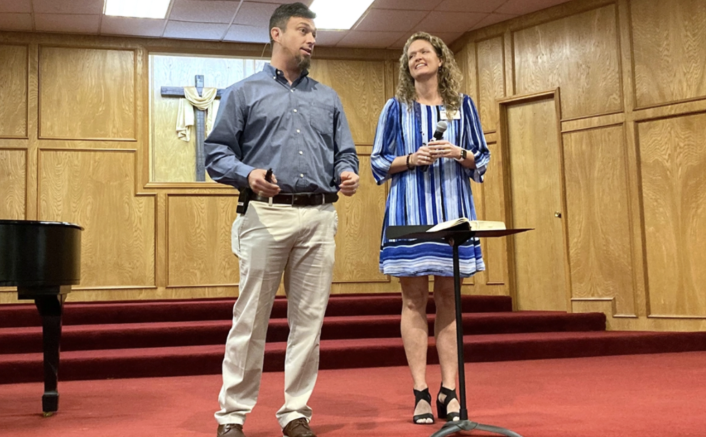 When Church Connections launched, many of the initial missionaries involved were on temporary assignment in the U.S. due to the COVID-19 pandemic. This allowed some missionaries even to visit churches.

IMB missionaries Adam and Suzie Hailes share with members of a Southern Baptist church about their ministry in Sub-Saharan Africa. The Hailes deepened existing connections and formed new relationships with churches while on stateside assignment.

Pettigrew said IMB missionaries have been faithful to communicate with churches with whom they have personal connections.

“Historically, we’ve done a good job, but where we have not done a good job is connecting with all churches and really feeling the weight, the stewardship of every single Southern Baptist church,” Pettigrew said.

IMB personnel have embraced the Church Connections effort and are eagerly connecting with pastors, church staff and members. Pettigrew has heard many missionaries say, “We should have been doing this already.”

Many missionaries have shared they have spoken to churches that have never had a missionary visit or contact them directly.

A couple serving in East Asia shared that one pastor they connected with wanted to begin a long-term relationship with an IMB missionary and revive giving to missions in his church that had recently undergone many changes. The pastor did not know whom to ask or how to make connections.

“The pastor had begun praying that God would send him someone to help their church connect with missions,” the couple said.

God answered, and a potential partnership is underway.

Pastors that Pettigrew has contacted tell him his phone call encouraged them during a difficult and lonely season where COVID-19 moved services online and made ministry complicated.

He tells them, “Our desire is to cooperate together more faithfully, to find ways that we can serve you as we all engage in this task together.”

“If there are 47,000 churches, we hope to see 47,000 churches engaged in the Great Commission – that’s both sharing the Gospel where they are locally and seeking ways to proactively be about making disciples of all nations and all parts of the world, so that God is glorified as He deserves,” Pettigrew said.

Pettigrew said he hopes Church Connections begins an ongoing dialogue about how IMB missionaries and churches can better collaborate.

“Church Connections is a part of who we are. This is not a program that’s going to have a stop and end date. It is who we are. It’s in our DNA,” he said.

Churches looking to increase their involvement with the IMB can do so in the following ways.