IMB: Called to heal and proclaim 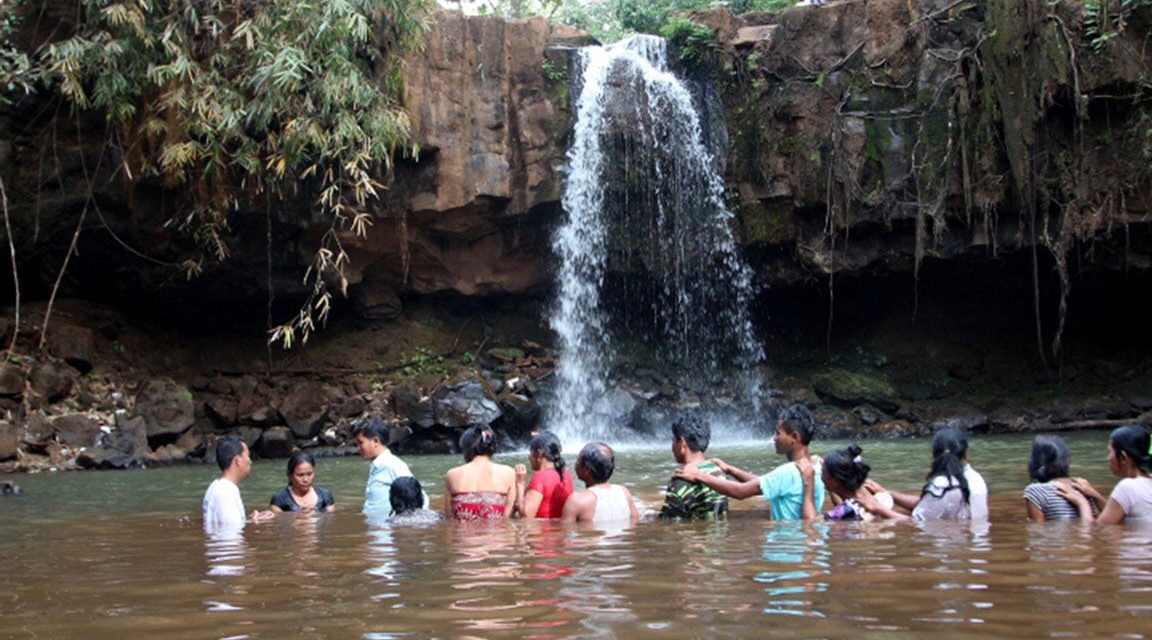 Believers in a Southeast Asian country form a line to be baptized. (IMB photo)

Spencer Jones, a doctor who serves with the International Mission Board (IMB) in Southeast Asia, remembers the moment Christ’s love truly made sense to a patient and her husband.

He was sitting in the home of Maiah and Yeshe Myat, an older couple he’d known for several years. Maiah was a terminally ill cancer patient.

The Myats did not have the resources to pay for scans or chemotherapy, but Spencer and his wife Kathryn used donations to provide everything Maiah needed. Three years of treatment had given the Joneses many opportunities to pray and talk with the Myats about the gospel, but the Myats remained steadfast in their Buddhist beliefs.

A few months ago, Maiah’s latest CT scan revealed her cancer had spread. Spencer and Kathryn felt an extra urgency to call the couple to repentance. As Spencer talked with them one afternoon, Yeshe shared that their family hadn’t given them any support. They’d only told Maiah to hope for a better reincarnated life.

“But you Jesus followers,” Yeshe said, “You’re caring for us, and you’re not even our family. Why would you do this?”

A few weeks later, the Myats were baptized just before the Joneses left for several months in the U.S.

“We may never see Maiah again on this earth, but we’ll see her again in heaven,” Spencer said.

Any salvation is always a reason to rejoice, but Maiah and Yeshe’s story especially encouraged Spencer and Kathryn that their unconventional approach to medical ministry was bearing fruit.

When they first felt called to serve overseas, they weren’t sure where it would lead. But one conviction that developed as they prayerfully considered their options was that medical work should not be at the expense of ministry or vice versa.

“Medicine is not a bad thing, but it can very easily become an idol,” Spencer said. “It can be tempting to just rely on that and forget what we’re actually called to do. Yes, to heal, but there’s not a period after that word. We’re called to heal and proclaim the gospel.”

Spencer, a family practice physician, and Kathryn, a physician assistant, saw limitations in the typical approaches to medical missions. They knew medical missionaries who worked in hospitals but saw how the strict boundaries of those formal roles made it difficult to build deep relationships with patients.

They knew of other approaches where medical work is seen just as a platform to gain entry somewhere to focus on meeting spiritual needs.

They believed something different could be true—that medical care itself could be the open door for deep relationships that lead to gospel transformation. Meeting physical needs and spiritual needs could go hand in hand.

“These were very specific callings we knew the Lord had asked of us, and it didn’t fit the mold of what anyone was doing at the time,” Kathryn said. “(Other approaches) aren’t wrong, and we love the doctors who go do those things. We just knew specifically for us, He was asking us to do something we hadn’t really seen done before.”

Seven years later, they can testify that God has made a way where at first there didn’t seem to be one.

The Joneses serve in a small, rural town in Southeast Asia. While they aren’t formally licensed to practice medicine in the country where they serve, the Lord has helped them build trust with officials over the years and opened a door for them to run an informal clinic.

They’ve cared for patients dealing with everything from hypertension to cancer to pregnancies, and faithfully meeting these physical needs has opened doors for gospel opportunities. With some patients, it might just be a prayer or a testimony. With others, the Joneses have built deep relationships and seen God work in powerful ways.

They’ve developed strong partnerships with local believers who help with evangelism and discipleship and began training locals to help in the clinic.

The ministry they have built didn’t happen overnight. Kathryn and Spencer say that focusing first on learning language and culture laid an essential foundation.

There were days during the first few years when they wondered how they’d ever get a foothold into medical work, but looking back, they can see the wisdom in God’s timing. Because of the years they spent learning the language and investing in the community, they have been well-positioned to serve during these last two years.

COVID-19, along with political unrest, closed every other clinic in their town. Many doctors at the local hospital also left, prompting officials to ask Kathryn and Spencer to meet any needs they could. They began helping deliver babies, administering Maiah’s chemotherapy, so she wouldn’t have to travel, and caring for a myriad of other needs.

Not every story has had a happy ending, but as they have followed God’s leading, they have learned to release control, entrust their patients to the Lord and remember they are never alone.

“The last two years have been very hard,” Kathryn said. “Being on the front lines of life and death situations has been incredibly difficult, but God’s been there with us. He never left us alone in those times, and He’s prepared everything we needed.”

Pray for God to give the Joneses rest and renew their spirits during their time in the U.S. Pray for God to give wisdom and endurance to national partners who will continue running the clinic and ministering to patients, and pray that the Myats will grow in their faith.

Some names may have been changed for security reasons.