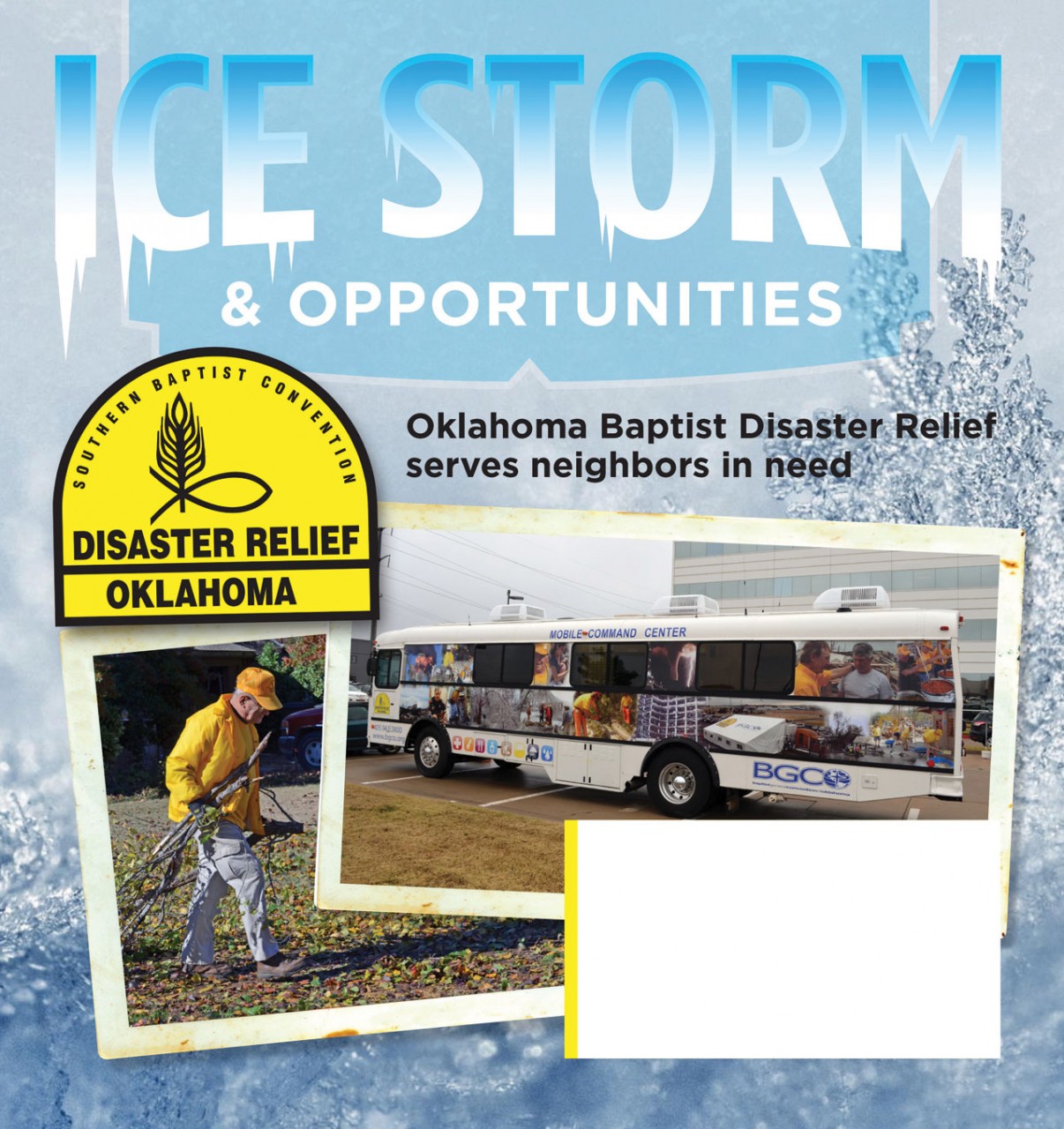 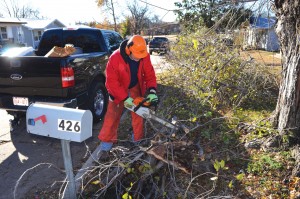 Oklahoma Baptist Disaster Relief (DR) has answered the call to many who were affected by the recent ice storms in parts of Oklahoma. More than 70 trained DR volunteers from across the state were sent out, as Sam Porter, disaster relief director for the Baptist General Convention of Oklahoma, and those under his leadership collected hundreds of requests for assistance.

“They were predicting the worst ice storm ever in western Oklahoma,” said Porter. “Technically, the ice storm wasn’t near as severe as the weather service had anticipated, but it was crippling to the western half of Oklahoma City, out to El Reno and into western Oklahoma.”

Porter said the local news stations and city officials of Oklahoma City were key promoters of Disaster Relief, as they featured DR phone numbers in news releases and in telecasts.

“On the first day we had nine chain saw teams respond within 36 hours after the weather cleared,” Porter said, though the number of volunteers have increased, and early reports show more than 350 work orders, which increased.

DR set up its Incident Command Center at Yukon, First, which is a central area of where the ice storm hit. Yukon, First’s gymnasium was used for serving meals for volunteers and disaster survivors who were without power.

“We’ve had scores of calls the first two days from elderly people that are helpless. I’ve also gotten calls from family members and neighbors concerned about elderly,” Porter said. “Our priority are widows, elderly couples, people with disabilities, single moms and military wives whose husbands have been deployed. We’ll help anyone, but if we know of any of these situations, we will move them to the ‘head of the line’ because that takes the stress factor off of them.”

“Some volunteers almost compete with each other to go out and work the chainsaws. Men would rather work with chain saws than mud,” he said, jokingly. “It’s something they know they can do and know they are making a difference in people’s lives. It’s extremely hard work, but they are willing to do that.”

Though many DR volunteers are helping with the effects of the Oklahoma ice storm, Porter said there are two DR mudout teams in Weslaco, Texas, the southern tip of the Lone Star state, following the flooding that occurred last month. “We’re doing mudout work for Texas, but we’re relying on many of them to help with chain saw teams.”

Oklahoma City resident Darrell Hadley was like many who experienced the ice storm. Four days after the storm, he was out in his yard removing tree limbs when a team of DR volunteers showed up to help Hadley’s neighbor.

“These guys showed up next door to work on my neighbor’s yard,” said Hadley. “‘What are you doing?’ one of them said, and I said, ‘Cleaning up this mess in my yard.’ He said, ‘How old are you?’ I said, ‘80.’ He said, ‘You don’t have any business working out here like that.’”

Hadley reluctantly agreed. Though he usually is an active do-it-yourself handyman, he was recovering from hand surgery three weeks prior to the ice storm.

“’Put down that saw right now, and we’ll take care of all this,’” Hadley said the DR volunteer told him.

“Who are you?” Hadley asked. “He said ‘The Baptist Disaster Relief. Yes, we are going to do (Hadley’s neighbor) Joe’s yard, but we’re going to do yours, too.’”

Hadley was so surprised.

“My Lord, the angels have come down!” he shouted. “I just so appreciate it. I would have never gotten this done in two weeks. They’ve got it all done in less than three hours. I will send a nice donation to Baptist Disaster Relief.”

Hadley does woodcraft in his garage. Along with making Christmas gifts for many of his family members, he also makes wooden crosses that are mailed in packages to military personnel serving overseas. He said he has made more than 6,000 wooden crosses.

Porter believes it will be a few weeks before all the damage from the ice storm is removed.

“I think it will be at least 2-3 weeks before it is all cleaned up,” he said. “The good news is I haven’t seen as much severe damage.”

Untrained DR volunteers are requested to help. Porter is asking anybody who is available to be a part of the ice storm clean up.

“We need people to pick up limbs from the ice storm, so our chain saw teams can focus on the really big jobs that need chain saw work done,” Porter said. “You may come as individuals or as teams. Consider bringing your youth groups, Sunday School classes, men’s groups, college team, etc.”

Those who are interested in volunteering can email Disaster Relief at oksbdr@gmail.com. Work gloves and work boots are required. Volunteers also can report to the Incident Command Center at Yukon, First, 15 S. 6th St.

“We also are highly aware that other areas of the state are experiencing the same issues, and we are working on getting chain saw teams placed strategically in those areas,” Porter said.