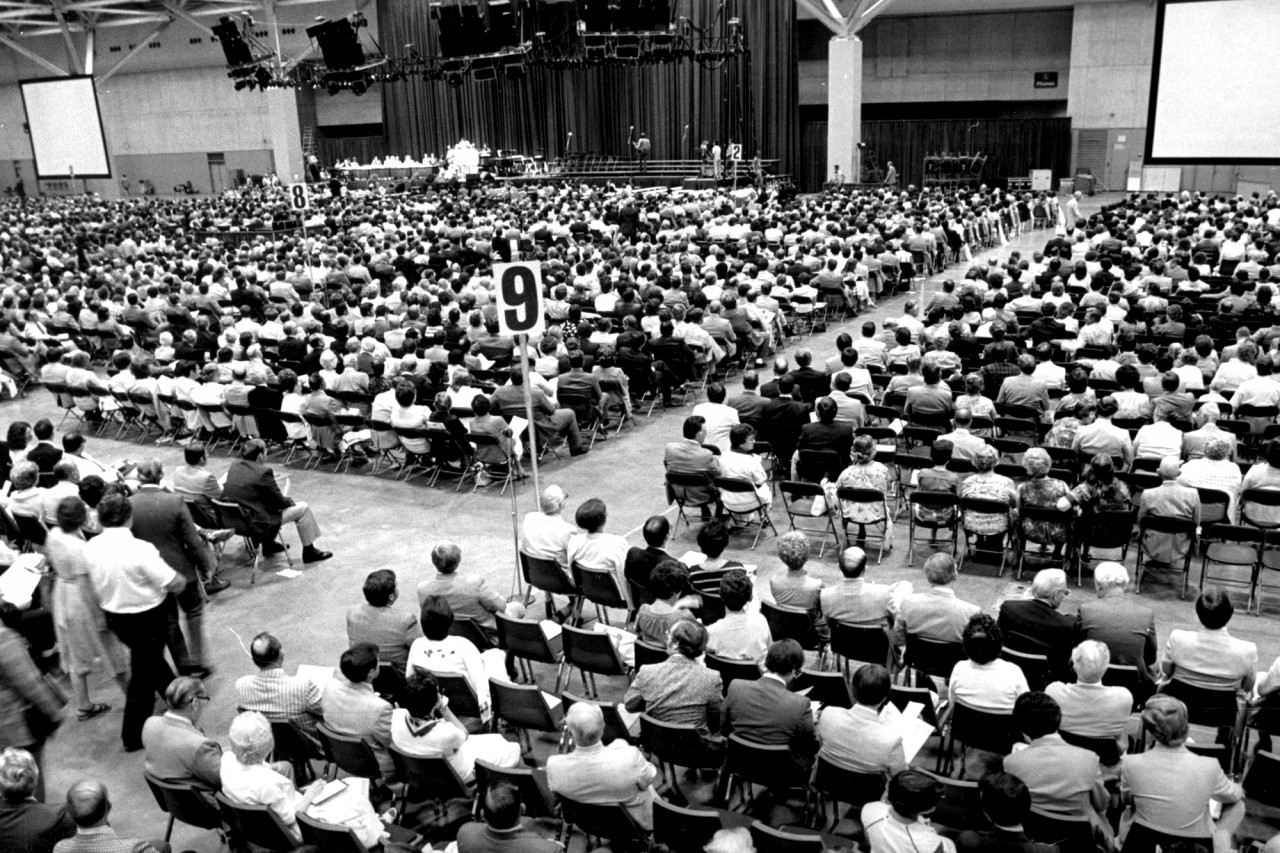 Messengers to the 1980 SBC annual meeting in St. Louis approved the first of more than 20 pro-life resolutions adopted by the convention over the next several decades (Photo: SBHLA)

NASHVILLE (BP)—In 1979, Larry Lewis picked up a copy of the St. Louis Post-Dispatch and saw a full-page ad listing the Southern Baptist Convention among denominations that affirmed the right to abortion.

“Right there beside the Unitarians and universalists was the Southern Baptist Convention,” Lewis, a St. Louis pastor who went on to become president of the Home Mission Board (now the North American Mission Board), told Baptist Press. “. . . That bothered me a lot.”

So Lewis did something about it, proposing in 1980 the first of more than 20 pro-life resolutions adopted by the SBC over the next few decades. When Lewis became HMB president in 1987, one of his first actions was to create the office of abortion alternatives to help churches establish crisis pregnancy centers.

Thanks to Lewis and others, newspapers do not call the SBC pro-choice anymore.

In 1979 though, it may have seemed a reasonable classification.

Baptists and Roman Catholics had long agreed that life begins at conception, but Baptist scholars, unlike their Catholic counterparts, generally did not develop biblical and theological arguments regarding unborn children. By the mid-20th Century, abortion rarely came up among Southern Baptists, and average church members had only “a general feeling that abortion was wrong,” Timothy George, dean of Beeson Divinity School at Samford University, told Baptist Press.

Things got worse in the ‘60s. “The whole nation and culture kind of went off the rails and lost its moral moorings, including any kind of understanding of the sanctity of pre-born life,” he said.

Between 1965-68, abortion was referenced at least 85 times in popular magazines and scholarly journals, but no Baptist state paper mentioned abortion and no Baptist body took action related to the subject, according to a 1991 Ph.D. dissertation by Paul Sadler at Baylor University.

Three years later, a poll conducted by the Baptist Standard newsjournal found that 90 percent of Texas Baptists believed their state’s abortion laws were too restrictive.

Support for abortion rights was not limited to theological moderates and liberals. At New Orleans Seminary in the early 1970s, some conservative students who went on to become state convention presidents and pastors of prominent churches supported abortion for reasons other than to save the life of the mother, Richard Land, former president of the Ethics & Religious Liberty Commission (ERLC), told BP.

“They pretty much bought into the idea that life begins when breath begins, and they just thought of (abortion) as a Catholic issue,” Land, who attended New Orleans Seminary between 1969-72, said of his fellow students.

A 1971 SBC resolution on abortion appeared to capture the consensus. It stated that “society has a responsibility to affirm through the laws of the state a high view of the sanctity of human life, including fetal life.”

But the resolution added, “We call upon Southern Baptists to work for legislation that will allow the possibility of abortion under such conditions as rape, incest, clear evidence of fetal deformity, and carefully ascertained evidence of the likelihood of damage to the emotional, mental, and physical health of the mother.”

When the Supreme Court legalized abortion on demand in 1973 with its Roe v. Wade decision, some Southern Baptists criticized the ruling while maintaining their support of abortion rights as defined in the 1971 resolution.

Others embraced the Supreme Court’s decision. A Baptist Press analysis article written by then-Washington bureau chief Barry Garrett declared that the court had “advanced the cause of religious liberty, human equality and justice.”

Norma McCorvey, the unnamed plaintiff in Roe v. Wade who later became a pro-life activist, made her first public statement after the ruling to BP, revealing her true identity. One of McCorvey’s attorneys, Linda Coffee, was a Southern Baptist and also granted BP an interview.

“It’s great to know that other women will not have to go through what I did,” McCorvey told BP in 1973, commenting on her experience of giving birth and placing her child up for adoption. “I’m glad the court decided that women, in consultation with a doctor, can control their own bodies.”

A 1981 pamphlet published by the Christian Life Commission, a precursor organization to the ERLC, spoke of “Christian concern for the value of the defenseless fetus” but went on to argue, “It is questionable that Christian love and justice would be served by extremely restrictive laws which do not give conscientious people with proper medical advice the opportunity to choose when they are faced with very grave moral dilemmas related to abortion.”

In a more extreme stance, Southern Seminary professor Paul Simmons argued that “God is pro-choice,” and some prominent Baptist leaders were among early supporters of the Religious Coalition for Abortion Rights.

Not all Southern Baptists supported abortion rights, however. Lewis became strongly pro-life in the late 1960s when he and his wife sought to adopt a child, believing they were unable to have biological children. The Lewises—who eventually had three biological children—were told they had to wait five years to adopt because of a shortage of children.

“To me it was incongruous that people would be destroying their babies when there were (couples) who were desperately wanting children,” Lewis said.

For Land, a high school science class drove home the reality that unborn babies were humans worthy of protection. A classmate whose father was an obstetrician brought a fetus to school in a jar of formaldehyde as a prop for a presentation and stored it beside Land’s desk. When Land told the teacher he was disturbed by the fetus, he was sent to the principal’s office, where a school administrator asked, “You’re not Catholic, are you?”

A few months later, Land’s mother told him doctors had urged her to abort him, believing he would be born with severe abnormalities.

“From that moment forward, I really felt an obligation to speak up for unborn children who couldn’t speak for themselves, because I had been in danger,” Land, who was president of the CLC/ERLC for 25 years and now serves as president of Southern Evangelical Seminary, said.

As the 1970s progressed, Land, Lewis and thousands of individual Southern Baptists—including the organization Southern Baptists for Life—argued for protecting unborn life in all cases except to save the physical life of the mother. Among non-Southern Baptists, apologist Francis Schaeffer and future U.S. Surgeon General C. Everett Koop argued that abortion was immoral and gained increased support for the pro-life cause.

Southern Baptists as prominent as W.A. Criswell, pastor of Dallas, First, began to shift from a qualified pro-choice view to fully embrace the pro-life position.

Following the Roe v. Wade decision, news sources reported that Criswell said, “I have always felt that it was only after a child was born and had life separate from its mother that it became an individual person, and it has always, therefore, seemed to me that what is best for the mother and for the future should be allowed.”

But, according to Land, Criswell “listened intently” to pro-life arguments during the ensuing years, including arguments Land made while teaching at Criswell College beginning in 1975. When the Criswell Study Bible was published in 1979, Criswell included “overtly pro-life” study notes, Land said.

“Some of our pastors in those years hadn’t really studied what Scripture said about abortion,” Jerry Vines, former SBC president and retired pastor of Jacksonville, Fla., First, told BP. “But I think the carnage (of increased abortion following Roe v. Wade)drove them back to their Bibles to take a further look.”

Studying a Greek word from the New Testament “really nailed down the abortion issue for me,” Vines said.

The word “brephos,” translated as “baby,” is used eight times in the New Testament, Vines said. Six of those occurrences refer to children who have already been born, but two speak of John the Baptist in his mother’s womb.

“That’s pretty convincing evidence that Scripture looks on a baby in its mother’s womb as a baby,” said Vines, who also noted Jeremiah 1 and Psalm 139 as convincing pro-life passages.

When a succession of conservative presidents were selected by messengers to lead the SBC beginning in 1979, they appointed resolutions committees that consistently proposed pro-life statements. In turn, messengers to the convention’s annual meetings supported those statements—partially because some had changed their opinions and partially because greater numbers of conservative messengers were attending the meetings.

Meanwhile, Land was elected chief executive of the CLC in 1988, and made defending unborn life one of the entity’s priorities. Under his leadership, the CLC lobbied for pro-life legislation in Congress and taught Southern Baptists how a biblical ethic of life applied to abortion, reproductive technology, human cloning and embryonic stem cell research.

Current SBC President Ronnie Floyd told BP that Southern Baptists must build on victories of the past and re-articulate their commitment to defend unborn life in every generation.

“If we continually hold high our commitment to holy Scripture, to the lordship of Jesus Christ and our commitment to human life from the moment of conception, I think we can constantly be an effective voice” for life, Floyd said.