Hispanic Falls Creek well attended, many decisions were made

DAVIS—Hispanic Baptist Churches of Oklahoma hosted a family retreat at Falls Creek Conference Center, March 18-21. With 500 people in attendance, 19 professions of faith were made as well as 40 rededications.

“The Hispanic retreat was successful,” said Daniel Caceres, Hispanic ministries specialist for the Baptist General Convention of Oklahoma, who explained there were opportunities for age-specific meetings and worship times. As younger campers were able to enjoy two different music groups that led worship services, older campers had a musical group of a different style they appreciated.

The breakdown of who attended the retreat included 110 children, 172 youth and 218 adults. “We saw people coming to know Jesus Christ,” said Caceres. “There were not many unbelievers, but the main thing is that many were telling others that the retreat was very helpful to them. They will go back to their homes and tell others about Jesus Christ.”

Caceres said a few shared they were involved in drugs, but since the retreat they no longer participated in such lifestyle choices. “They find that Jesus Christ can provide for them the joy that the drugs are not providing. This joy is permanent.”

Many families were able to spend time together during the retreat. Caceres said plans will be made to have sessions for next year’s retreat in Falls Creek’s new Mathena Family Event Center, which is scheduled to be completed at the end of this year. 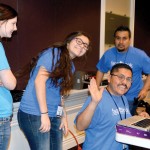 Alex Benito of Durant, First Hispanic on the laptop prepares for worship time with young people. 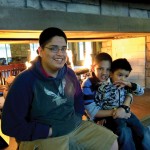 Young campers warm up by the fire (Photo: Jordan Anson) 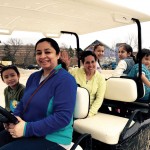 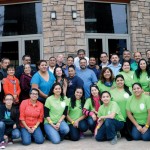 Many volunteers were needed to make Hispanic Falls Creek a success