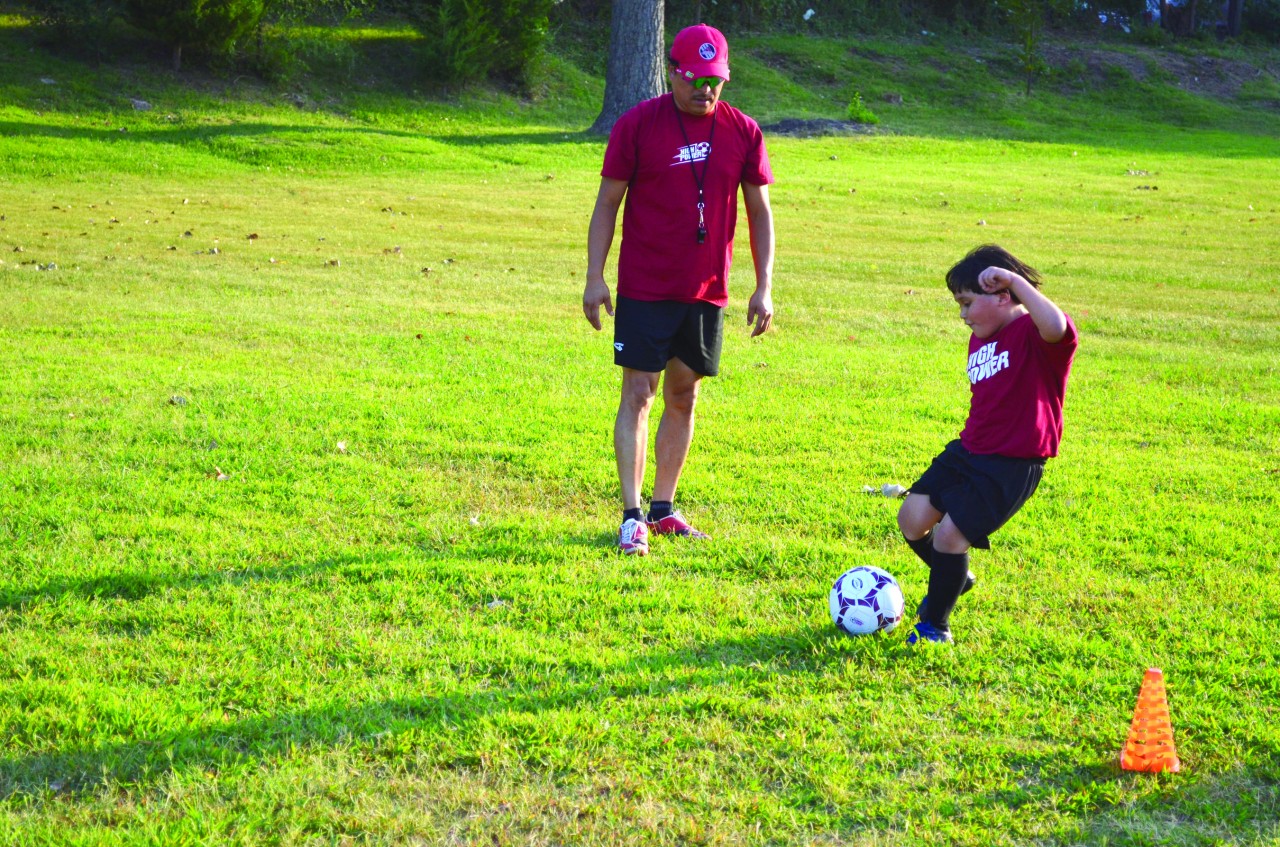 Coach Luzwin Willagran, left, observes a camper in one of the drill stations.

This summer, every country was engrossed with what was happening in Brazil as teams from all over the globe came to compete in the World Cup. It is no secret that soccer has an international draw.

It also is no secret that the Latino population is growing in the United States overall, and especially in Oklahoma. State Hispanic churches are branching out in their respective communities as they see the need to connect with this increasing Spanish-speaking populace. Oklahoma City, Rivers of Living Water, is using the world’s most popular sport as a source of outreach.

At the end of July, this growing Hispanic church started a weekly soccer camp. More than 50 children, ranging from 4 to 11 in age, meet on the soccer field behind the church on Meridian Ave.

“We practice soccer every Thursday. We start with warm-ups, and then have different stations to learn different skills,” said Luzwin Villagran, who is one of the soccer coaches. “Most of the kids are from church, but we also invite those who don’t know Christ.”

Children dribble through cones, practice shooting into a goal and learn how to pass the ball. They have a good group of coaches, men in the church, who are leading them at the camp. 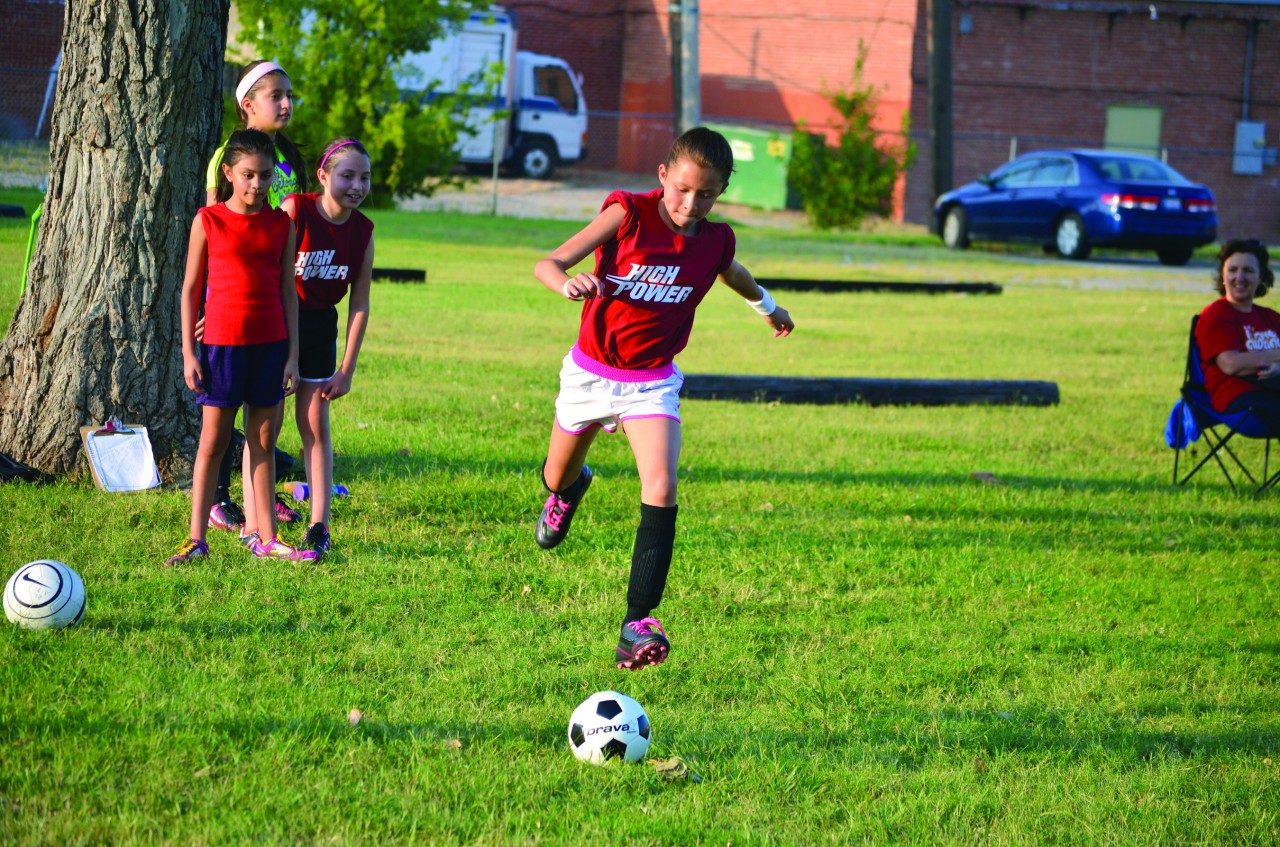 Maribel Reyes, a leader of the children’s program, is very supportive of the soccer camp. She said the church started the camp in order for children to remain involved during the summer after Vacation Bible School was over.

“At first we thought about having it every day for a week, but it was too hot, and the coaches could not come every day,” Reyes said. “Then we decided to do it once a week. We want (the children) to invite other kids to come to the soccer camp. We want to reach them for Christ, and we expect to disciple them through AWANAs.”

Rivers of Living Water has been doing Awanas for five years. Reyes said they had 27 children that first year, and now they are averaging 80 kids a week. They will begin meeting for AWANAs in September.

After every camp session, Reyes and the coaches have a Bible lesson and share the Gospel with the children. “Last week, we asked them if they want to receive Christ in their hearts,” Villagran said, “and five of them accepted Jesus.” 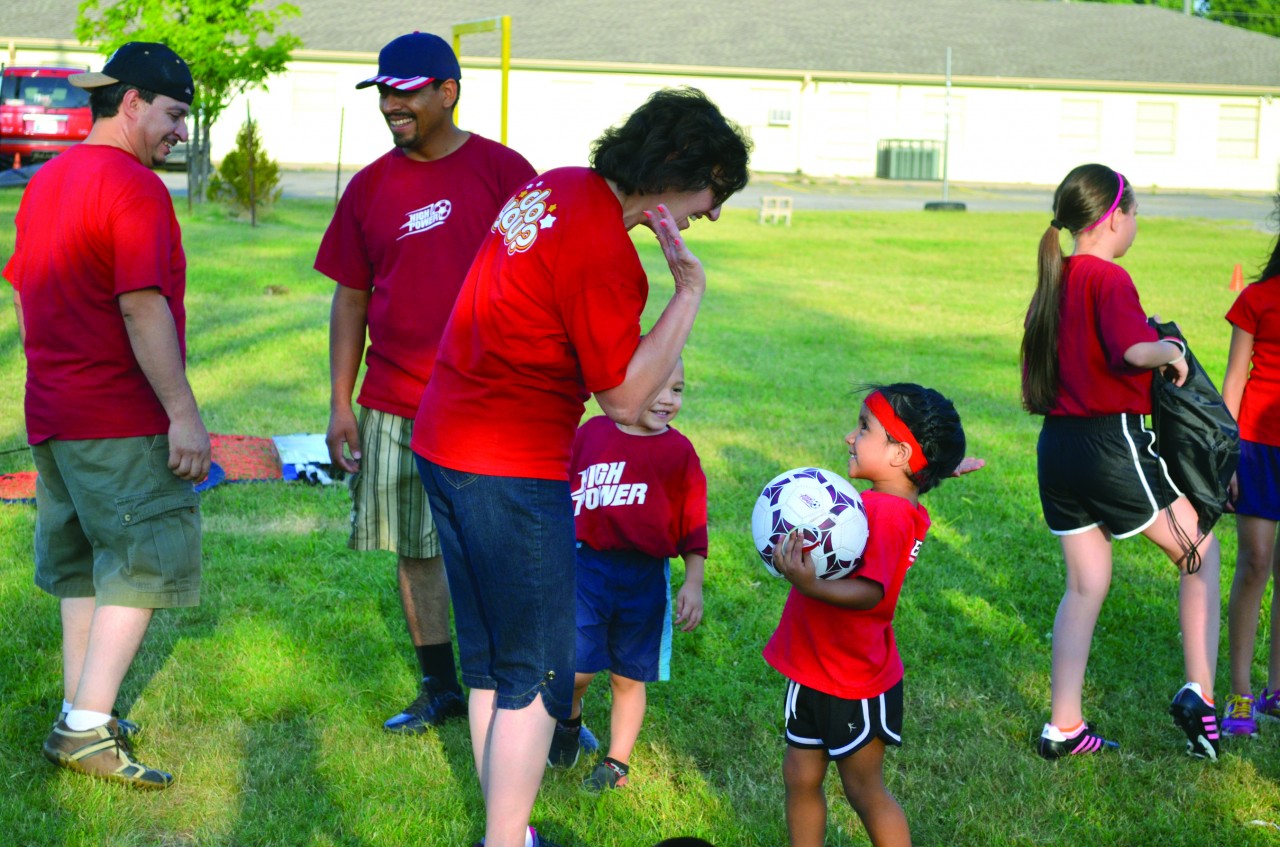 Maribel Reyes, a leader of the children’s program at Oklahoma City, Rivers of Living Water, offers a ‘high five’ to an excited camper.

Both Reyes and Villagran said the soccer camp also is having an impact on the parents. “The kids make their parents bring them every Thursday,” said Villagran, “It’s becoming very popular, and many parents are listening (to the Gospel presentation). I believe we are planting seeds.”

Reyes said more families are getting involved with the church. She said one mother whose children come to the soccer camps has been attending the Sunday services.

“They are starting to come, step-by-step.” Reyes said.

As Rivers of Living Water continues to have success in reaching children and families, the church hopes this outreach program will appeal to other Hispanic churches.

“That’s our purpose. We hope many other churches do this,” said Reyes. “It is an investment. Some churches don’t think they have the resources. But we hope to be an example that it can happen.”