ADA—Rusty Fuller, pastor of Ada, Trinity, took to heart what he read in the May 29 Baptist Messenger. Alan Quigley, church outreach team leader for the Baptist General Convention of Oklahoma, wrote on the released Baptism Task Force Report by the North American Mission Board. Fuller said Quigley’s column caused him to be “burdened about the continual decline in baptisms,” so Ada, Trinity, decided to take a Sunday and focus on baptism. 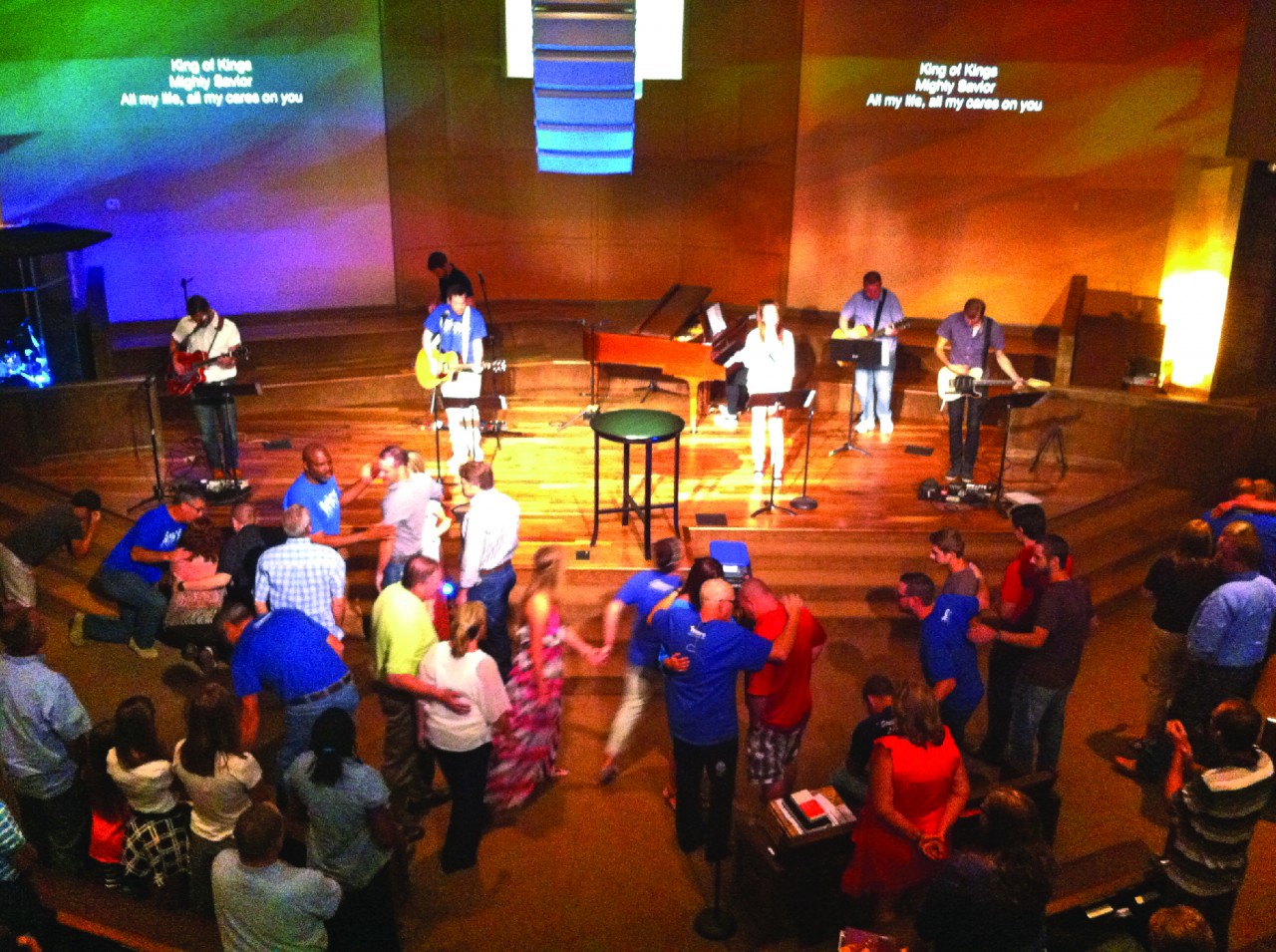 The response from people that Sunday was beyond expectations as ministers counseled and prayed with many during the invitation time.

What happened on Aug. 3 was beyond what Trinity’s staff expected. The service began with the observance of six baptisms, and as the service continued, Fuller made baptism the point of emphasis that morning.

“We wanted to make certain, first of all, that people were believers,” said Fuller, who recently celebrated his 30th anniversary as Trinity’s pastor. “And then the things I talked about in the sermon (included) were they baptized by immersion and was their baptism in the correct order of first being a believer and then observing believer’s baptism.”

In his sermon, Fuller shared two passages in Acts that emphasized baptism, which included Acts 2:37-38, “What shall we do? … Repent and be baptized every one of you,” and Acts 8:36, “…What can stand in the way of me being baptized?” Fuller said to his congregation, “Whatever is standing in your way today, we don’t want that to be a barrier.”

The church staff prepared “kits,” small Rubbermaid containers that had a change of clothes and a towel. Fuller made certain there would not be any excuses for anyone who had not observed believer’s baptism and could be baptized that day.

What happened at the invitation time turned into what the church staff described as “utter chaos.” They were not prepared for the 26 people who responded, who did not have intentions of being baptized when they came to church that day.

“We planned for 20,” said Whitley Tracy, who is the youth associate for girls’ ministry. “When people came forward, there weren’t enough ministers to council them. We were soon running out of kits. As the people were coming, we realized we didn’t have enough clothes.” She said they were hunting down old Falls Creek shirts and shirts from previous church events. Eventually, some just said to be baptized in what they were wearing.

Of the 26 who were baptized at the end of the service, four were high school seniors, and the rest were adults. Fuller and his staff said they counseled various kinds of people, ranging from unbelievers to those who were in their 50s and had been church members all their lives.

“I don’t think we ever in our wildest imagination thought that it was going to turn into what it turned into,” Fuller said. “I can’t tell you how many people said to me, ‘I’ve never been a part of anything like this before,’ and I replied, ‘Neither have I!’”

Coltin Wester, worship and music pastor, said he noticed all the activity happening at the alter, but he was amazed at how receptive everyone was in the service. “We wanted to keep everyone in a spirit of worship,” he said about the worship experience that lasted more than two hours. “It was a life-changing experience for everybody, not just for those who were baptized.” 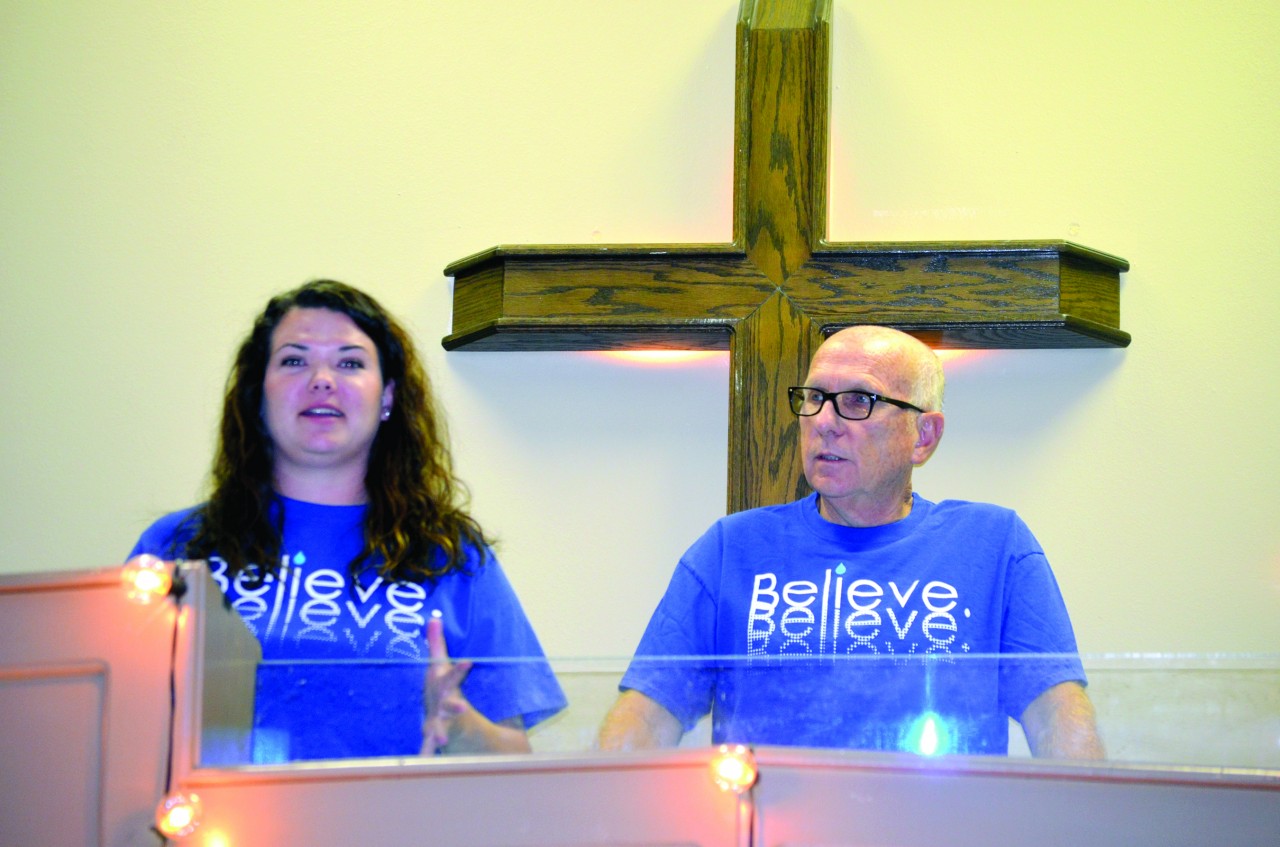 Tracy shared her testimony before Rusty Fuller, right, baptized her.

Much rejoicing occurred as the service was concluding. However, just as the closing prayer was happening, Tracy went up to Fuller and shared an urgent plea, “I need to be baptized.”

Though she had been on staff at Trinity for almost two years and was involved in the preparation of baptizing many that day, Tracy came to grips with the realization she also needed to observe believer’s baptism.

Though the intended concluding prayer had been voiced, David Gray, associate pastor, grabbed a microphone and told everyone not to leave. Everyone waited to see Fuller baptize Tracy.

“I accepted Christ. I know I am going to Heaven, but God has called me today to make this public declaration,” Tracy said while giving her testimony from the baptistery.

The aftermath of this banner day continues to resonate. Fuller and his staff plan to keep this experience in the forefront and continue to have baptism a priority.

“We want to make baptism a big deal. We want to celebrate life change. We want to hone in on them sharing their story,” said Wester.

“Sometimes we just ‘tack on’ baptism at the end of a service,” Fuller said. “It’s not a real emphasis. This was one of the things we wanted to change. We are going to be more intentional about having a baptismal celebration.”

Fuller hopes other churches will join Trinity and will find ways to make baptism more of an emphasis.

“I don’t want to rub it in anybody’s face,” he said. “I want them to experience what we experience. It may not be the numbers of people, but what we found out is a lot of people are struggling with baptism. And if it’s happening with our church, there have to be those people in every church.”