Harrison to ‘Press On’ Across Oklahoma 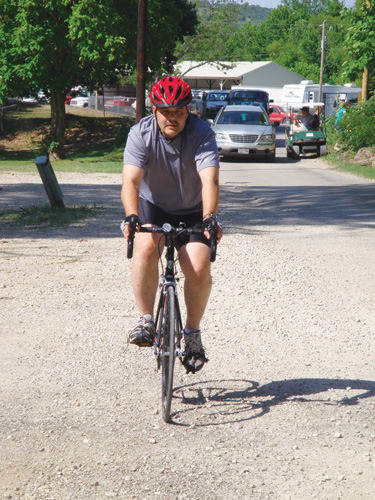 You won’t ever find Andy Harrison in the field for the Tour de France, but he has his sights set on a grueling diagonal bicycle road trip across the Sooner State in September.

No, he’s not crazy, although some may think so of his goal of riding a Trek 1.2 road bike 493.2 miles from Guymon to Idabel in only 10 days, Sept. 7-18, with a two-day break for the Oklahoma Youth Ministers Association meeting, Sept. 11 at the Baptist Building in Oklahoma City.

Harrison, BGCO student education & ministry specialist, conceived what he calls the “Press On Cycling Road Trip” to point out that churches can do a much better job of reaching out to students.

The theme is based on Paul’s message, “press on so that I may lay hold of that for which also I was laid hold of by Christ Jesus.” (Phil. 3:12b, NASB)

“I’ve just been really impressed that as much as we’ve been doing with youth ministry, we’re still not making a lot of headway with a significant number of students,” he stressed. “So, I started doing the research on how many students there are in Oklahoma, how many we are reaching and it just goes ugly from there.

“There are approximately 347,000 students, ages 12-17, from the latest Census, and in 2007 we had 47,123 students on our church rolls. We only average about 45 percent of our enrollment, so on any given Sunday, we’re only effectively ministering to about 20,000 of those students, which is under 6 percent of the student population statewide.

“If you add all of those fringe kids who only come on Wednesdays or to camp and add in all the other denominations, you still have at least 280,000 students in Oklahoma who are not being reached by any church.

“Now, that doesn’t mean that they haven’t been to church, but it means that really there’s not any connected activity with them whatsoever.”

Harrison isn’t discounting what is being done, but he says much more could be.

“The uncomfortable part of it is we don’t know what to do if we stay outside the walls and don’t bring them back inside. We need to raise up people to go out into these areas and develop ministries to them, and although they may never come in, we’re going to keep ministering to them because this is what Christ has called us to do.”

“I want to get as many youth leaders as I can to come to these stops,” he said. “I’m going to give them demographic information about their specific county, including agencies, schools and churches that they can partner with and do ministry in ways that they have never done before.

“I’m convinced that we don’t even see these kids. The sad thing is, we just haven’t been looking for them. The fact is, there are kids out there who don’t meet our demographic, and we don’t know what to do.

“The linchpin of youth ministry has been, ‘we will plan it and they will come,’ and that still will be viable in the future, but we have 280,000 students circulating in Oklahoma right now who don’t come, and that’s the majority of 340,000 in Oklahoma.

“We’re going to have to minister to people who may never respond to what we do for them. Our ministry tentacles have to grow, and our leaders in our churches have to say it’s OK to do that ministry outside this place, even if those people don’t come. That’s vital. Jesus would back that.”

Harrison said he is going to give student leaders some ideas and information they need to go back and get involved in discussion in their churches.

“They’re going to get even more specialized training later at the Oklahoma Youth Ministry Forum, and we’ll offer them a discount for that, too,” he added.

His message follows an acrostic “PRESS:”

1. Purpose-A message that illuminates the need for reaching students, the scriptural call for us to meet that need, and practical directives to help us proceed as churches and individuals.

3. Essentials-Demographic information on teenagers in their association (or county)

a. Number of teenagers

b. Number who are churched.

c. Social/Economic stats (Everything from ethnicity to income)

4. Strategic partners-A list of churches, schools, and agencies for partnerships and ministry.

Student leaders, students and others are invited to ride along with Harrison on legs of his bike trip in their area. They may sign up to do so at www.skopos.org, where additional information also is available.