Happy-Lee ever after: Sibling group of four adopted by Del City family 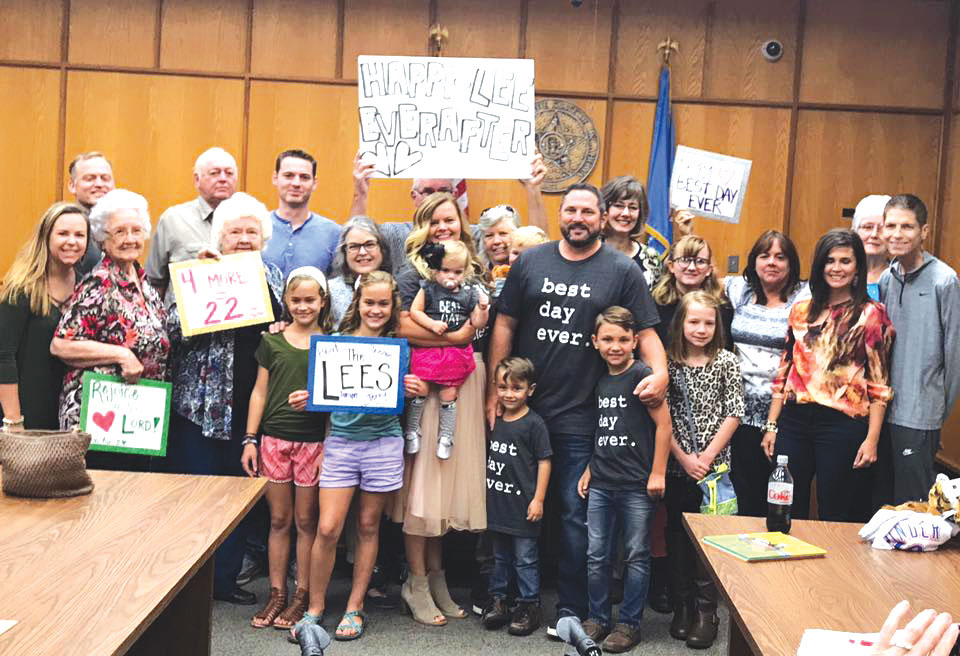 DEL CITY—Within the past five years, Jared and Kelly Lee went from beginning to pray about adoption to having a full house of four children.

Jared and Kelly have always had a heart for adoption. Jared was adopted, and Kelly came from a large family, where her relationships with her siblings helped 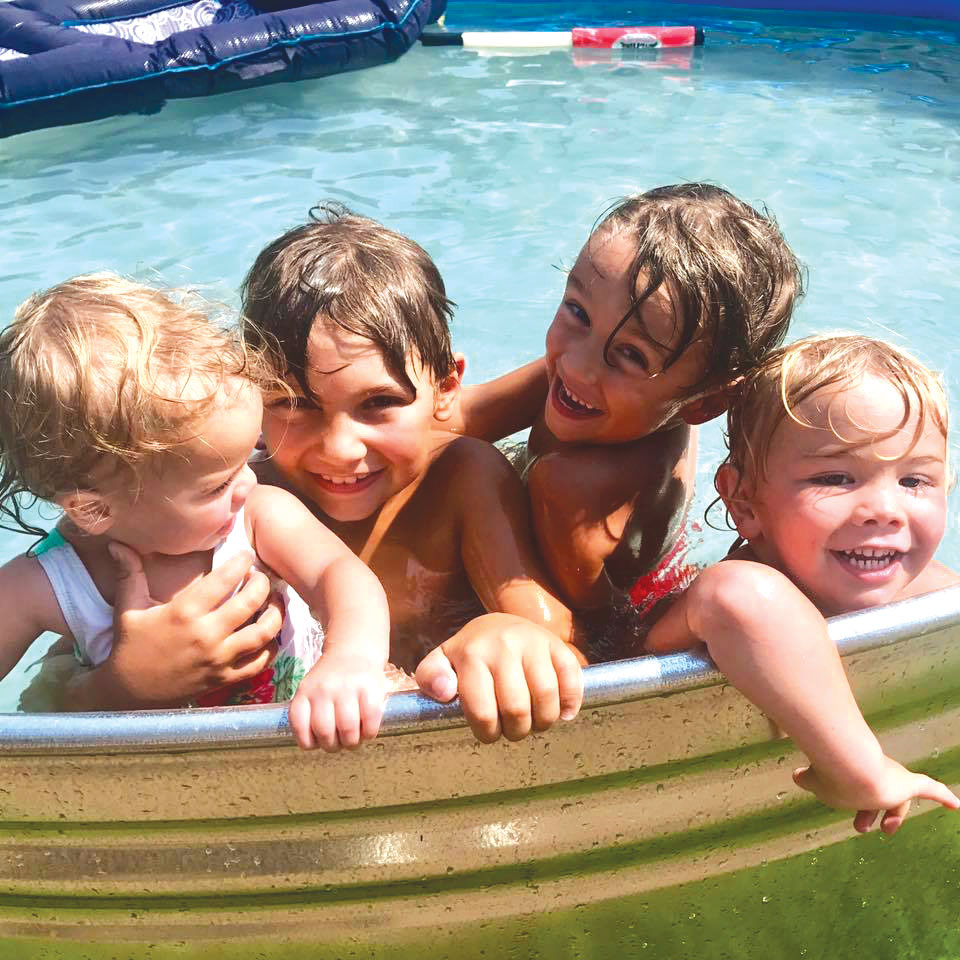 The Lee kids splash in the pool together this past summer Photos: Provided

shape who she is today. It was for those reasons that the Lees began not only praying about adoption, but adopting a sibling group.

“We had not yet been able to start a family of our own, and we both felt God’s calling upon our lives to provide a loving home for a group of siblings that might not otherwise be able to stay together,” said Jared, college pastor at Del City, First Southern.

“I have always wanted a lot of kids,” said Kelly. “God just broke my heart once I began doing research on children without families or homes.”

Kelly explained that she had been hesitant to foster due to the heartbreak that can sometimes be a part of the fostering process. However she felt the Lord speaking to her. “Our heart was to be open to whatever God wanted for our family. We knew that if it involved adoption, we would be open to that,” she said.

The Lees’ story, especially in the past five years, portrays one leap of faith after another in obedience to where the Lord was calling them.

The first leap of faith came when Kelly fell victim to downsizing at her job. However, the Lees had dreams in the past of opening a restaurant, so they went for it. After another door was closed, making it difficult to open their restaurant, Kelly took a leap of faith and began working for a company from home. 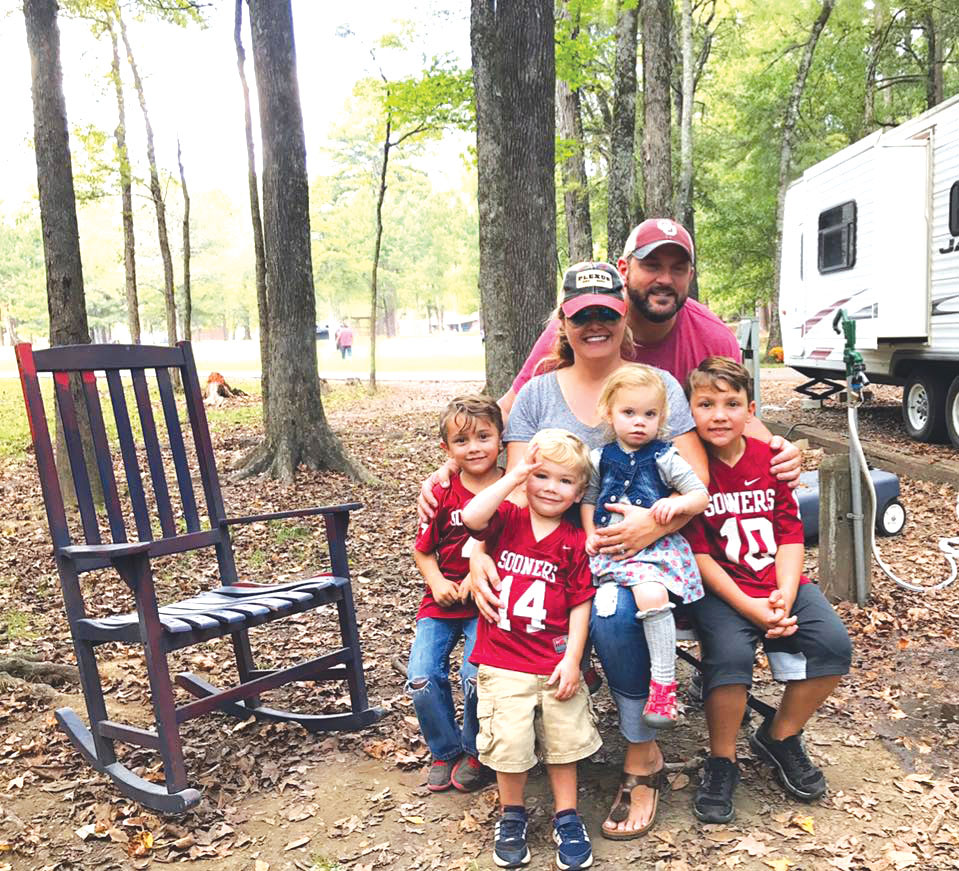 Jared and Kelly pose with the children on a family camping trip shortly after their adoption was finalized.

The next leap of faith came with bad news. Jared’s childhood friend, Shane Hall, pastor of First Southern, had asked Jared before to come on staff at his church, so when Jared received a call from Hall, he assumed it was a call of similar nature. It was not. This time, Hall called to tell Jared that he had developed cancer.

“We knew that we were supposed to move to Oklahoma City, if for no other reason than to be able to be there for Shane and his wife Misty, who I had introduced years before,” Jared said.

The Lord opened doors for a college position at First Southern, and with heavy hearts, the Lees left the church in which Lee had pastored the youth for 17 years.

What the Lees didn’t know, is that First Southern is where the Lord would lead Jared and Kelly to their children.

Kelly said that, one night, they received a call from a parent of one of their college students at the church. “She said, ‘I have no idea why I’m calling you, but you’re my last resort,’” Kelly recalled.

The mom had adopted a young girl years ago, and now her daughter’s four siblings needed a foster home.

Kelly had begun preparing appropriate forms to make the Lees able to foster children, but had not yet completed them. However, when the situation arose to take four children, a sibling group consisting of children ages six, four, 20 months and four weeks old, the Lees knew what would happen.

“I listened to her story, somewhat in disbelief, and told her, ‘Tell my wife what you just told me’,” Jared said to the woman. “I handed her the phone knowing what was about to happen. We were about to take in a sibling group of four young children, and our lives were about to drastically change.”

A week later, the Lees were approved as emergency foster parents. As they hurried to obtain things like car seats, baby gates and all they would need for children, their church stepped in. “Our church threw us a ‘baby shower’ and provided us with gift cards and lots and lots of diapers. First Southern was now the kids’

Friends and family surround the Lees on the day Robert, Terry, Tristan and Taryn’s adoptions were made final

The adoption process has been a long one. Adopting even one child is a tedious process, so adopting four siblings came with its own set of trials, but the Lees remained faithful in prayer as they served and obeyed the Lord.

Their patience paid off. In August, the Lees received the phone call in which they had been waiting for so long. Jared and Kelly were told that Robert, Terry, Tristan and Taryn, the children who had become their family, would now officially become “happy-LEE ever after,” Jared said.

“I think the thing that strikes me so much about our story is the way that God has continued to lead and provide, and how He is in it for the long haul.

“We knew that God had placed on our hearts to adopt a sibling group. Tell us this would happen five years ago, we would say ‘No way!’ It required two job changes, moving and a phone call, little did we know that He was at work the whole time.”

Now, the children have settled into their physical home and their church home. The oldest, Robert, made a profession of faith in Christ on Easter Sunday, securing an eternal home in Heaven.

Kelly said that on the day the children were officially adopted, the judge said, “You know it takes a village, and it’s pretty obvious you all have a great one,” as friends and family filled the courtroom in celebration of the joyous day.

“We love our family, church family and friends from all over that are supporting us through many prayers, encouragement and words of wisdom over the last 586 days.”

These 586 days cover the length of the Lees’ adoption process going from a family of two to a family of six. Five years is how long ago they began praying about adopting. But it only took seconds for them to say the word “Yes,” allowing the Lord to grant them their hearts desire, and change six lives forever.