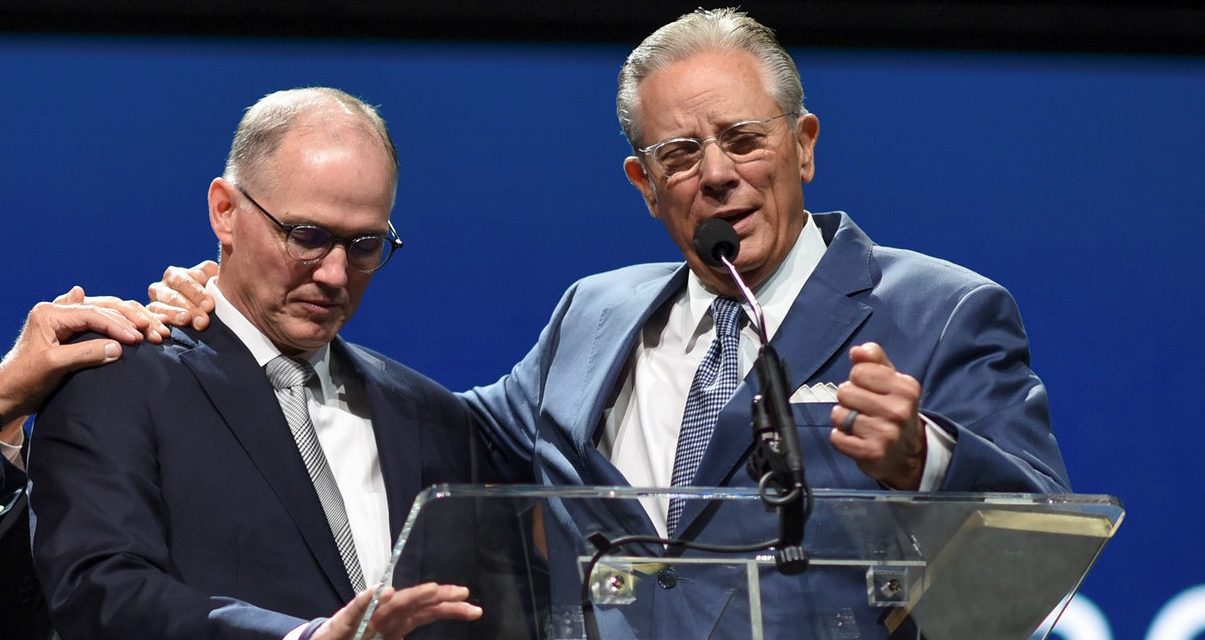 Above: O.S. Hawkins, right, prays for Hance Dilbeck during the GuideStone report at the 2021 Southern Baptist Convention Annual Meeting. Dilbeck is now president and chief executive officer of GuideStone, replacing Hawkins who will serve as president emeritus.

PLANO, Texas—GuideStone® Financial Resources continued its efforts to ensure pastors and other church and ministry workers could focus on their callings while also achieving and meeting their financial goals and needs.

In his final remarks to trustees, Hawkins indicated he has been captured by a verse, Job 12:9, which reads, “Who among all these does not know that the hand of the Lord has done this?” Hawkins told trustees it has indeed been God’s hand at work over the last 25 years.

“What a privilege it’s been for Susie and me over this quarter of a century,” Hawkins said. “This whole journey has just been absolutely amazing.”

Hawkins was celebrated by friends, family, current and former GuideStone trustees and staff during a dinner Monday night, Feb. 28 in his honor.

“One of the greatest privileges of serving in this position has been the opportunity to get to know O.S. and Susie both personally and professionally,” Trewick said. “Thank you both for all you have done — we love you and will miss you.”

Trustees presented the couple with gifts, including a donation to further fund the O.S. Hawkins Outstanding Pastoral Ministry Graduate Award at Southwestern Seminary.

“I can give witness, as so many of you can, on how God has had His hand on O.S. Hawkins,” Jones said, detailing much of the growth of the ministry over the last 25 years. “Everything starts with O.S.’s relationship with the Lord.”

At Dilbeck’s request, Hawkins will continue to serve GuideStone until an official retirement on July 31. Hawkins will continue to write and speak on behalf of Mission:Dignity® while also providing assistance to Dilbeck. The trustees bestowed on Hawkins the honorary title of President Emeritus to recognize his continued efforts on behalf of Mission:Dignity even after his official retirement.

“He understands the Kingdom of God is about relationships,” Dilbeck said. “He cares for people, especially the pastor at the crossroads. O.S. has a pastor’s heart.”

Reflecting on the ministry’s many accomplishments during his tenure—registering GuideStone’s investment options in 2001, the name change in 2004 from the Annuity Board to GuideStone, Southern Baptists’ approval to make GuideStone’s retirement, investment and life and health products to like-minded ministries and churches, and to make those investments available to those in the pew — Hawkins noted that it was the continued faithful support of Mission:Dignity for which he was most grateful.

During ministry reports, Jones, chief operating officer, said the highlight of 2021 was the record year experienced by Mission:Dignity, which included the largest fundraising year ever, $11 million; more donors than ever before gave to Mission:Dignity, 10,000; and the greatest November fundraising, aided by matching donations on the nationwide #GivingTuesday emphasis.

“Most of that $11 million comes from Sunday School classes, churches and individuals who have been regular donors, giving $100 or $1,000 here and there,” Jones told trustees.

Through Mission:Dignity, GuideStone helps more than 2,400 retirement-aged Southern Baptist ministers, workers and their widows, with extra money needed for housing, food and vital medications, ensuring a well-deserved dignity, independence and, often, the ability to continue serving the Lord. The neediest couples with at least 25 years of paid Southern Baptist service receive $750 each month under increased benefits approved by trustees last summer.

Following a Hawkins custom, Dilbeck established a theme to guide the ministry’s work for 2022, calling it the “Year to Set a Stone.”

The imagery comes from 1 Sam. 7:12, which reads, “Then Samuel took a stone and set it between Mizpah and Shen, and named it Ebenezer, saying, “thus far the Lord has helped us” (NASB 1995).

Dilbeck noted that the passage connotes both a backward look, remembering the past and celebrating what the Lord has done and a forward look, confident that the Lord will continue to be with us. Dilbeck said, like the Israelites, GuideStone is called to Look Backward, Look Upward, Look Inward and Look Forward.

Part of the next year will involve the executive team working together with trustees to develop a new strategic plan for the ministry, following a cycle Hawkins established with the formation of the GuideStone 100 long-range plan that guided the ministry for more than a decade. Dilbeck said, though, that strategic plans can fail without the Lord’s hand.

“He has helped us, He will help us, and indeed He must help us, or our strategy is vanity,” Dilbeck said.

Looking back on 25 years, Hawkins concluded his final remarks, committing to Dilbeck and trustees that he would be Dilbeck’s greatest asset and his biggest supporter.

“We are looking backward with hearts so full of thanksgiving for 25 wonderful years, looking forward to passing the baton to Hance and Julie,” Hawkins said. “I look forward to great days ahead.”

Then echoing his own charge received from Ray Taylor, who led the trustee search committee that called Hawkins to GuideStone in 1997, Hawkins gave his charge to Dilbeck.

“You take something great and make it greater,” Hawkins said. “I’ll be your biggest fan and supporter.”