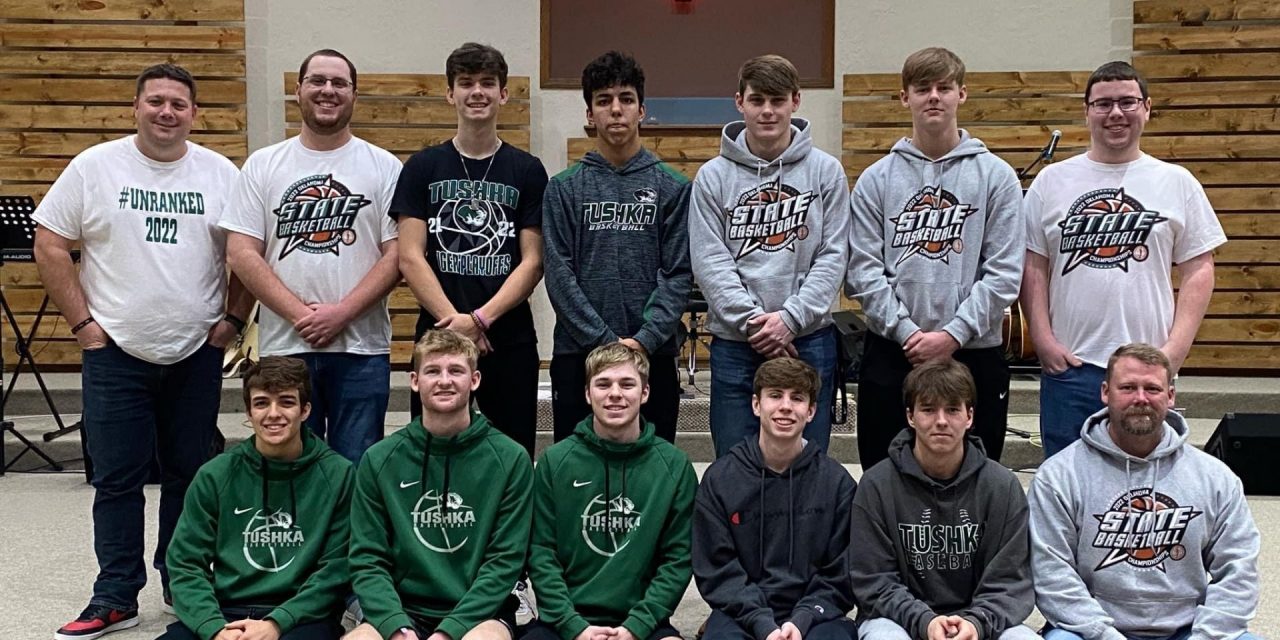 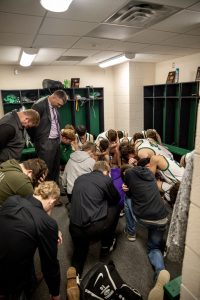 Tushka is the first unranked team in state history to claim the state title. As reported by The Oklahoman’s Cameron Jourdan, Tushka finished the season with an 11-game winning streak and pulled off victories over high-ranked opponents, including No. 5 Arapaho-Butler, No. 1 and defending state champion Hydro-Eakly and then No. 2 Garber.

The story resembles the movie Hoosiers, with Tushka being a squad that was not expected to make such a splash in the state tournament. Chris McDaniel, pastor of Atoka, Southside, explained there is even a greater story involving spiritual strides.

McDaniel said many of these players made a “complete 180 change” from how they used to be. Some had reputations of not demonstrating Christ-like examples, but progress started in 2020, even amid the COVID pandemic.

Though statewide summer youth camp did not happen at Falls Creek Conference Center that year, McDaniel said the church had its own camp experience at Falls Creek. He believes spiritual seeds were planted that year.

Last summer built on that 2020 camp time. Southside brought 80 people to Falls Creek with 25 campers making spiritual decisions, including 21 being professions of faith in Christ or following in believers’ baptism. Many making these decisions were Tushka basketball players, and it has grown from there.

“It’s been incredible how they are taking their faith with them,” McDaniel said. “There has been genuine repentance, and they are regularly involved in Bible study and at church every Sunday.”

This includes being at Southside for Sunday worship the next day after winning the state title. 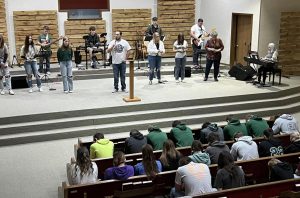 The Sunday service at Atoka, Southside after Tushka won Class A title with members of the team sitting in the front rows.

“These boys could have stayed in OKC last night to celebrate,” Angel Hauff wrote on Facebook about the Tushka players, “or after getting home at 1:30 a.m. this morning, they could have slept in. I know they are physically exhausted! These boys said nope, we are going home because we are going to be at Church in the morning! They have a love for God that is a testimony in itself. Great leaders, role models, and State Champions all in one!!!”

“This is their habit,” McDaniel said about the boys faithfully attending church, as well as other discipleship programs.

Randy Hurt, director of missions in Atoka-Coal Association, agreed with McDaniel on the spiritual growth the Tushka players have demonstrated. His son, Fisher, is a member of the team, and Hurt is involved with sharing devotions with the team before every home game.

“I agree with Chris (McDaniel). Since last summer, they are ‘all-in’,” Hurt said about the team’s spiritual growth. “They are involved in a Bible club at school known as Tigers for Christ, and all of them are leaders in the club.”

McDaniel credited Matt McIninch, youth pastor at Southside, for discipling and encouraging the young men, as well as the many students at Southside. McIninch also runs the scoreboard for Tushka home games, and his brother Timothy is the team statistician.

Assistant coach Tracey Griffin is a member at Southside, and head coach Chris Zike is a member of Atoka, Harmony. Many Oklahoma Baptists have been involved with this team, not only with success on the basketball court but in the spiritual lives of the students.

“It’s great to see them take (their Christian faith) from the church house to the school house and then to the gym floor,” McDaniel said.

And Tushka also took it to the “Big House,” the nickname of State Fair Arena, where their success on that court could see even more success toward advancing the Gospel.