Greenway pledges to lead ‘one Southwestern’ in inaugural address 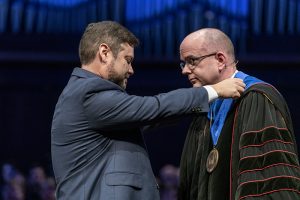 FORT WORTH, Texas—In his address to the Southwestern Seminary community, President Adam W. Greenway pledged to lead “one Southwestern” from four “vantage points”—institutionally, denominationally, relationally and ultimately—during Oct. 21 inauguration ceremonies to mark his election as the seminary’s ninth president earlier this year.

Appealing often to the founding president of the institution, B.H. Carroll, Greenway anchored his message in the seminary’s history, while also acknowledging recent missteps and offering an apology “for any way in which we have fallen short.”

With Eph. 4:1-6 as the basis of his message, Greenway said, that although the ceremony was for the purpose of the inauguration of a new president and to “celebrate” the “storied institution,” he asserted the first purpose of the gathering was to “worship our great God, the Father of our Lord and Savior Jesus Christ. He is the reason we are here, and He is the hero of the story tonight.”

In marking one Southwestern institutionally, Greenway quoted Carroll’s address to the first graduating class in 1908: “You well know what I regard as the crowning mission of my life; what to me is more than life, and that is to see The Southwestern Baptist Theological Seminary established on such a basis as will insure perpetuity and place it among the greatest training schools for preachers in this world.”

Although a “theological university” that exists to unite academic disciplines, Greenway said the more than 111-year-history of the seminary, its breadth and depth of academic program, and 200-acre campus “can provoke, at times, separation and division, rather than unity.”

Greenway confessed his own error as a Master of Divinity student arriving at the seminary in 1999 believing that his studies in the School of Theology were of greater importance than those of students in the two other “lesser schools.”

God, “in His kindness,” Greenway admitted, corrected that error by bringing into his life Carla Peppers, who was a student in the educational ministries school and would later become his wife. The Lord used Carla “to remind me it wasn’t just what happened in the School of Theology that mattered at Southwestern Seminary,” Greenway said. “Every program, every school had a unique part to play in making Southwestern Seminary everything God called our seminary to be.”

Noting the “real key” to Southwestern Seminary is its people—faculty, staff, students and alumni—Greenway said, “Southwestern Seminary must never be allowed to be defined primarily as a monument, a museum or a mausoleum; but must always be known as an institution defined by the movement of the Spirit of God, the ministry of equipping God-called men and women for Kingdom service, and the mission of connecting all people to Jesus Christ.”

Greenway said the denominational vantage point of a one Southwestern is seen in the founding of the seminary, both in its doctrinal commitments and even the naming of its first streets on the Fort Worth campus.

The founding documents of the seminary required, he noted, that faculty “subscribe” to the articles of faith, the New Hampshire Confession of Faith. Later, each iteration of the Baptist Faith and Message has been affirmed by subsequent members of the faculty.

The seminary has “stood in lockstep solidarity” with the SBC, clearly confessing “this we believe,” without hesitation or reservation, he said. “We have always been a seminary that has been trusted to teach the truth.”

Greenway affirmed the common cause of theological education shared by all six Southern Baptist seminaries, although they are at times as competitive as Southeastern Conference college football rivalries.

“But when we’re at our best, we’re together in the task,” he said.

Scarborough said the naming of the streets would be a “constant reminder to all the world that our two seminaries are linked together in a great task with a holy fellowship. I think the thought to do this thing was of the Lord and will help us in some way to carry on together the great work started by these two noble Baptist heroes.”

Calling Southern Seminary and Southwestern Seminary the Harvard and Yale, respectively, of the Southern Baptist Convention, Greenway added, “We stand in this task as one Southwestern in solidarity with our sister seminaries and our sister entities in the great task that God has given to the Southern Baptist Convention of churches. And we must not allow ourselves to be in the position of trying to pit and to position one seminary against another for crass political purposes.”

The new Southwestern president said the quote “resonates well with our inaugural moment together tonight,” in introducing the relational vantage point of a one Southwestern.

“At Southwestern Seminary and Scarborough College, I want us to never waiver from hope—real hope; hope that can only be found in the life-changing Gospel of our Lord and Savior Jesus Christ.”

Noting that he was born the year the seminary’s sixth president, Russell H. Dilday Jr., was elected, Greenway said, “In this inauguration ceremony, the torch is being passed to a new generation. I cannot change the past. And I know at times our seminary in the past has not always been a place that has brought about the kind of hope and healing and unity that ought to characterize the New Testament people of God. For any way in which we have fallen short, I’m sorry, and I apologize.”

He also pledged “as president to do everything in my power to help Southwestern Seminary relationally be right: in right fellowship, right relationship with all who find alignment with what I call that ‘big-tent’ vision,” which he articulated upon his election.

Believing the vision “represents the heart of B.H. Carroll himself: that high view of Scripture, confessional fidelity, the Great Commission, and cooperation,” Greenway said, “If you find yourself in alignment with these things, we welcome you home to Southwestern.”

Asserting that agreement on “every nonessential point” is not necessary to “cooperate and work together,” he said. “It is time, I believe, for the Southwestern family to come together.”

Greenway pledged that the seminary exists to serve the churches, not vice versa. “Across the generations, wherever you may serve, I want you to know that this president cares for you.”

“Why one Southwestern? Why am I so committed to this theme? Why do I want to give all of my time and energy to that? Ultimately for me, it is because there is only one Southwestern,” Greenway said introducing the final vantage point.

“The mother seminary of Texas Baptists, the ‘crown jewel’ seminary of Southern Baptists, the institution to which I owe my marriage and my family, along with whatever success the Lord has allowed me to experience thus far in my ministry. And as one for whom Southwestern Seminary is not only alma mater, but truly magna mater,” he said.

“It is my prayer that the Lord will grant me the wisdom of mind, the health of body, the strength of spirit, and the longevity of tenure as president to see Southwestern Seminary once again lead in every right way for the cause of Christ, the church, our convention, and His Kingdom.”

Greenway cited Carroll’s dying charge to his successor, Scarborough, in 1914: “My greatest concern is not for myself. My spiritual horizon is cloudless. But my deep concern is about the seminary. Your life will be given largely to it. It is an institution born in the prayer of faith and the faith of prayer. You will need faith and prayer ahead.”

“Tonight, I pledge to you and to our Lord, my faith,” Greenway concluded. “And I ask you to please keep me, my family, our administration, our faculty, our staff, our students, our trustees in your prayers. May God find us faithful and make us fruitful in all things. May God truly bind us together as one Southwestern.”

James A. Smith Sr. is director of public relations at Southwestern Seminary