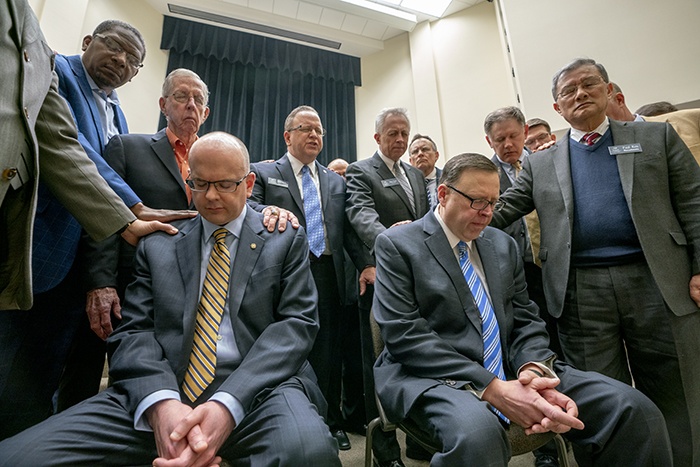 FORT WORTH, Texas (BP) — Adam W. Greenway has been elected the ninth president of Southwestern Baptist Theological Seminary. The election occurred during a special called meeting of the seminary’s board of trustees on the Southwestern campus, Feb. 26-27.

Greenway, 41, comes to Southwestern from Southern Baptist Theological Seminary in Louisville, Ky., where he served as dean of the Billy Graham School of Missions, Evangelism and Ministry. Greenway’s election signifies a return to Southwestern, as he completed his master of divinity on the Fort Worth campus in 2002. See related Baptist Press report.

During the special called meeting, Roberts recommended to the board that Greenway be elected president as well as professor of evangelism and apologetics.

The results of both votes weren’t made available to the public.

Prior to these elections, Ueckert, chairman of the board, thanked D. Jeffrey Bingham amidst a standing ovation for his leadership of the seminary during this academic year.

“No matter when our applause would have stopped, it would have been insufficient,” Ueckert said. “Dr. Bingham, you have been exemplary in your godliness, fearless in your leadership, and the greatest example for those who aspire to trust the Lord. We are grateful. In our seminary’s history, we will include a huge asterisk by your name to the significance of how you led us at a time where only God chose to use you.

“And as much as you will defer those accolades to those around you, I want it to be publicly known that the trustees of Southwestern Seminary believe that God uniquely used you in the most amazing way. And we are forever indebted. Thank you.”

The meeting concluded with the board gathering around Greenway and Stinson for a time of prayer. Danny Roberts voiced the prayer on behalf of the board, asking for the Lord’s blessing upon Greenway and Stinson’s families and ministries, the Lord’s guidance through the coming months, and a bright future of Great Commission fulfillment by the Southwestern family.

Adam Greenway says he wants to continue Southwestern Baptist Theological Seminary’s legacy as the “big-tent seminary of the SBC,” where Southern Baptists who differ on secondary theological issues can unite behind rigorous scholarship, missions and evangelism.

Greenway laid out his vision at a Feb. 27 press conference following his election as Southwestern’s ninth president. He also spoke of continuing the seminary’s heritage of strong faculty and producing Southern Baptist Convention leaders. Greenway said he has “no intention” of “trying to create a miniaturized version of &#91;Southern Baptist Theological Seminary&#93;,” where he served as a dean the past six years. 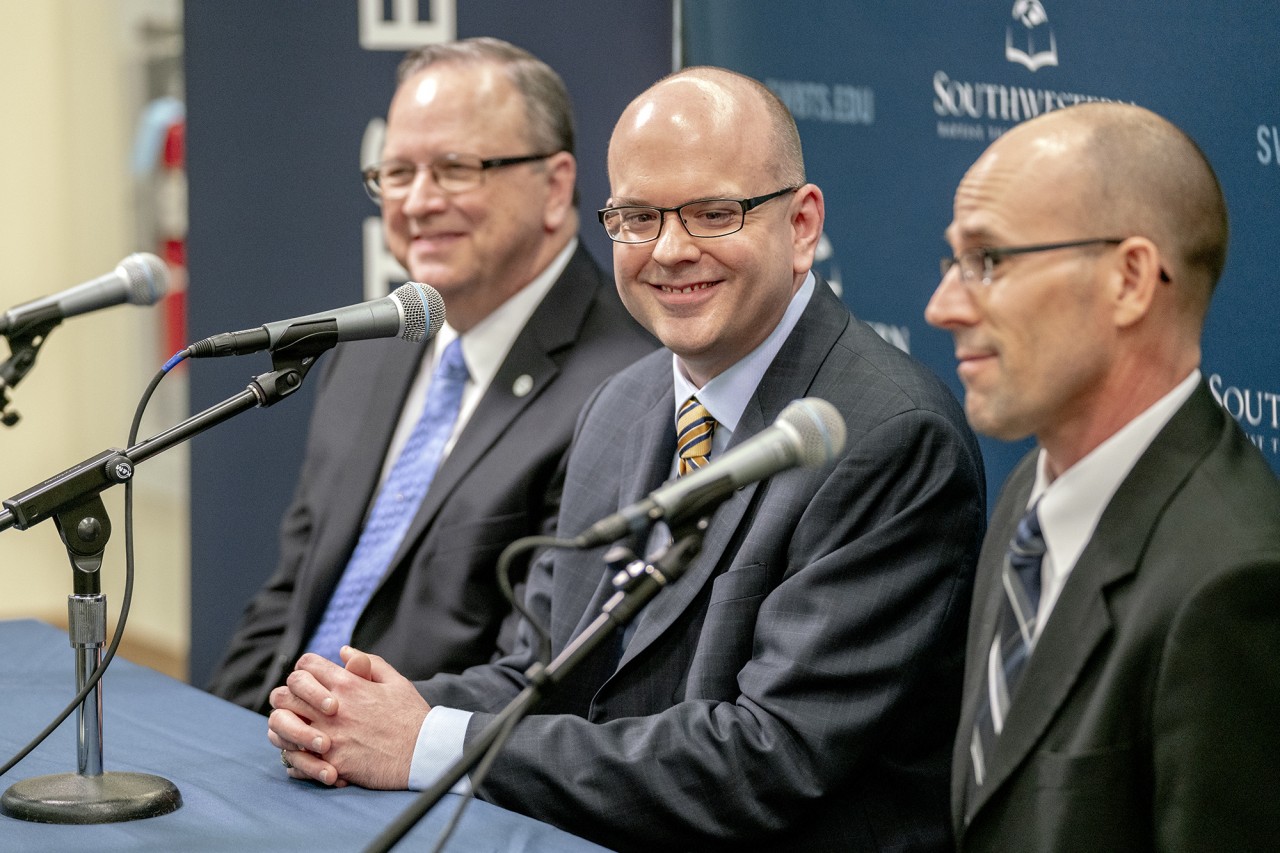 “Southwestern has had a distinct heritage … of being the big-tent seminary of the SBC,” Greenway said, “the seminary that’s been able to bring people together who may have differences of opinion on secondary or tertiary matters, but are committed to the main things of the Great Commission, the local church, missions, evangelism, preaching &#91;and&#93; pastoral ministry.”

Southwestern is unique for its “scholarship on fire” focus, Greenway said, quoting a phrase Southwestern founder B.H. Carroll used to describe academic rigor combined with passion for Christ. The seminary established the first professorship of evangelism at any seminary in North America, has been known for its soul winning emphasis and is poised to “touch the world and impact eternity right here from Seminary Hill.”

Another part of Southwestern’s heritage Greenway said he hopes to continue is its production of denominational leaders for churches and SBC entities. He noted Southwestern President L.R. Scarborough’s leadership in the SBC’s 75 Million Campaign nearly a century ago as well as Southwestern alumni who have influenced the SBC more recently, including Jimmy Draper, Morris Chapman, Jerry Rankin, Jack Graham and O.S. Hawkins.

Southwestern should “continue to provide a pipeline for leadership in every aspect of convention life,” Greenway said.

Maintaining a “faculty of generals” who attract the next generation of ministers will be another hallmark of Greenway’s tenure, he said.

In response to a media question, Greenway said he will not attempt to make Southwestern like Southern. The two institutions are distinct in Southern Baptist life and have a relationship analogous to Harvard and Yale, Greenway said.

“I have no intention of trying to come and trying to create a miniaturized version of Southern or a caricature of Southern here,” Greenway said. “I do not believe that Southwestern needs to import another institution’s legacy. We simply need to reinvigorate and retell the great legacy and history of this seminary for a new generation.”

“God has provided us all a unique blessing to be part of a moment like this,” said Ueckert, pastor of First Baptist Church in Georgetown, Texas. “And it’s our belief that this is the beginning of many more moments of sensing the Lord’s work, His presence and His purpose.”

Roberts, executive pastor of North Richland Hills (Texas) Baptist Church, said “God opened the paths that we needed to go down” during the search process. “It was absolutely incredibly amazing how the Holy Spirit worked in and through each of the different times we met together.”