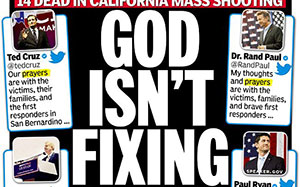 CARY, N.C. (BP) — Southern Baptist leaders are responding to the headline “God isn’t fixing this” that dominated the Dec. 3 cover of the New York Daily News. Images of tweets from Republican leaders surrounded the headline, displaying sympathetic “thoughts and prayers” for the people affected by a Dec. 2 mass shooting. 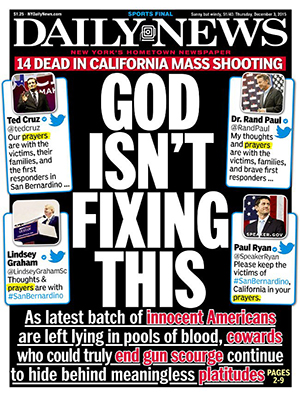 “I’m hard-pressed to think of a more cynical and exploitative headline at a time of national mourning,” Russell Moore, president of the Ethics & Religious Liberty Commission, told the Washington Post.

The massacre occurred in San Bernardino, Calif., at Inland Regional Center, a state-run facility for individuals with developmental disabilities. Two heavily-armed assailants dressed in tactical attire opened fire at a party located inside the building, killing 14 and wounding 17 more, according to the Los Angeles Times.

GOP presidential candidate Sen. Ted Cruz responded through social media with words of encouragement shortly after the shooting was reported. “Our prayers are with the victims, their families, and the first responders in San Bernardino who willingly go into harm’s way to save others,” he said in a tweet.

But the subhead for the New York Daily News article, written by Rich Shapiro, called Cruz and others “cowards who could truly end gun scourge” that “continue to hide behind meaningless platitudes.”

Shapiro wrote in the first line of the story, “Prayers aren’t working,” and quoted a tweet referring to gun control by Connecticut Sen. Chris Murphy, “Your ‘thoughts’ should be about steps to take to stop this carnage. Your ‘prayers’ should be for forgiveness if you do nothing — again.”

Emma Green, in an article for The Atlantic, called the sharp critique “prayer shaming.” She said, “There’s a clear claim being made here, and one with an edge: Democrats care about doing something and taking action while Republicans waste time offering meaningless prayers.”

Green noted, “This cynicism offers a view into just how much religion and politics have changed in the United States.”

He pointed out the oddity of a politically liberal news outlet demeaning Republican leaders for reacting to a tragedy by sharing “thoughts and prayers” since Democratic leaders, such as U.S. Vice President Joe Biden and Chelsea Clinton, daughter of Democratic presidential candidate Hillary Clinton, made similar statements only months ago after a mass shooting in Oregon.

Mohler declared, “It tells us something about our contemporary political scene and about the continued secularization of America that the words ‘thoughts and prayers’ have now become a matter of political debate.”

Yet, the issue is not wholly political, Mohler said.

“From a Christian perspective we have to understand that more than a response to the phrase ‘thoughts and prayers’ is at work here,” Mohler said. “The New York Daily News after all, in that screaming headline, declared ‘God isn’t fixing this.’ That is something Christians need to note very, very carefully.”

There is a deep moral longing in all people for the problems of this world to be solved, Mohler noted.

He continued, “Christians looking at this have to understand that nothing — no law, no political action — can actually solve the problem — can ‘fix it,’ as the New York Daily News demands — because the problem is in the human heart, not just in the events that come with horrifying headlines.”

The insufficiency for governmental, educational, psychological and other solutions to truly fix the problem of human violence points to the necessity and propriety of prayer in the face of murderous evil, Mohler said.

Only God can, and one day will, “fix it,” Mohler said. Yet, that doesn’t preclude the necessity for Americans to have a meaningful discussion about gun control.

“[W]here there is the possibility of doing something that will really decrease the potential for human evil,” he said, “we ought rightly to do it.”

Moore said, “I have no objection to people making the case for tightened gun control — even if I don’t agree with all their proposed solutions. Let’s have that debate. … The ‘prayer-shaming’ on social media, however, is not really about that debate at all.

“What most meant by ‘do something’ was to, well, express an opinion about gun control on Twitter. Ironically, enough, the ‘Don’t Just Pray There, Do Something’ meme will actually keep things from happening.

“We do believe that God can intervene, to comfort the hurting and even to energize ourselves and others for right action,” he said. “For those who don’t believe in the power of prayer, the last thing any of us should want is social pressure to pretend to pray. What we can expect, though, is for neighbors to express in whatever ways they have, ‘We love one another, and we hurt for one another.’

“When that becomes just another culture war battlefield, we’ve lost more than a set of policy proposals,” he noted. “We’ve lost the social cohesion we need to do anything.”