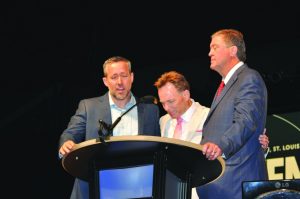 From left, J.D. Greear, Ronnie Floyd and Steve Gaines demonstrate a “moment of unity” in prayer at the SBC annual meeting. Gaines won the residential election, as Greear resigned as a candidate (Photo: Jennifer Rash)

ST. LOUIS, Mo. – The 2016 annual meeting of the Southern Baptist Convention (SBC) drew more than 7,300 messengers, 212 from Oklahoma, to produce one of the highest attended meetings in recent years. Under the theme of “Awaken America, Reach the Word,” the SBC meeting featured messages and moments of agreement, unity and prayer.

Following a runoff vote that didn’t produce a majority winner on Tues. June 14), North Carolina pastor J.D. Greear announced Wednesday he would withdraw from the race for SBC president during the SBC’s annual meeting in St. Louis. Greear’s decision—in an effort to help bring unity following a close vote—avoided a second runoff and left Tennessee pastor Steve Gaines elected by acclamation as president of the SBC.

Gaines said “there’s no way God is not doing something in all of this.” He said he had decided internally Tuesday night to withdraw but agreed to serve as president after a conversation with Greear.

“I just wanted Jesus to be lifted high” and the convention to be united, Gaines said. 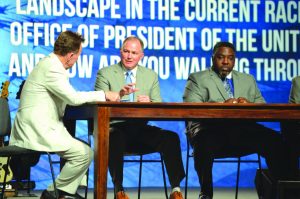 Following the runoff, SBC President Ronnie Floyd reported results of the election at the beginning of the Tuesday night session. Of the 7,230 messengers registered at the time of the first runoff, 4,824 ballots were cast. To be declared a winner, Gaines or Greear needed to win 50 percent plus 1 of ballots cast, or 2,413 or more votes.

Gaines received 2,410 votes or 49.96 percent while Greear received 2,306 votes or 47.80 percent. However, 108 votes were considered illegal because the wrong ballot was used or an indistinguishable mark was made. Roberts Rules of Order require that the 108 illegal votes be counted to determine a majority, Floyd said. “The rules are clear.”

A second run-off election between the two pastors had been scheduled for the Wednesday morning session.

Mark Walters, pastor of Nicoma Park, First, considered this SBC presidential election one of the greatest moments in SBC history.

“What a moving time in my heart and God’s people!” said Walters.

Former SBC president Johnny Hunt said in announcing Gaines’ nomination March 9, “When Steve Gaines shared his prayer journey he and (his wife) Donna had travelled, I was touched by his clear call to allow himself to be nominated. Steve struggled with this nomination as he has always believed this office should seek the man. With such a passionate desire for spiritual revival in our churches and nation, and knowing him to be a man of deep intense prayer, it brings joy to my heart to nominate Gaines.”

During the 11 years Gaines has pastored Memphis-area Cordova, Tenn., Bellevue, the congregation has averaged 481 baptisms per year, according to the SBC’s Annual Church Profile database. Previously, he pastored churches in Alabama, Tennessee and Texas.

Doug Munton, pastor of O’Fallon, Ill., First, was elected SBC first vice president. There were no other nominees, and Recording Secretary Jim Wells cast the ballot of the convention. 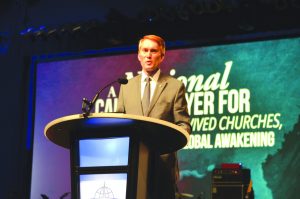 The Resolutions Committee brought a proposal to the messengers calling for “sensitivity and unity” regarding display of the Confederate battle flag. Its resolution called for Christians who display the flag “to consider prayerfully whether to limit, or even more so, discontinue its display” because of the “undeniably painful impact of the flag’s symbolism on others.”

After two messengers spoke against the resolution, former SBC President James Merritt offered an amendment that went beyond the committee’s proposed language. His two-fold amendment deleted a paragraph that said the flag “serves for some not as a symbol of hatred, bigotry, and racism, but as a memorial to their loved ones who died in the Civil War, and an emblem to honor their loved ones’ valor.” It also removed language about prayerful consideration and called for a halt to displaying the flag.

Merritt, lead pastor of Duluth, Ga., Cross Pointe, said he offered the amendment not just as a pastor, but as the great, great grandson of two men who fought in the Confederate Army.

“This is not a matter of political correctness,” Merritt said. “It is a matter of spiritual conviction and biblical compassion. We have a golden opportunity to say to every person of every race, ethnicity and nationality that Southern Baptists are not a people of any flag. We march under the banner of the cross of Jesus and the grace of God.”

Other resolutions adopted addressed issues involving praying, extending love and compassion to those devastated by the recent Orlando tragedy; biblical sexuality and the freedom of conscience; evangelism and soul-winning; prayer and support for Israel; Alzheimer’s disease and dementia, caregiving and the church; freedom of the press; voting as an expression of Christian citizenship; women registering for the draft; affirming “In God We Trust” as our national motto; and refugee ministry.

Jordan gave the closing prayer of the Tuesday afternoon session. He prayed for the families of Orlando who were affected by the terrorist shooting and that God would bless the conduction of business that occurred during the session, which featured much debate concerning resolutions as well as the initial SBC presidential election and various reports.

Felix Cabrera, pastor of Oklahoma City, Iglesia Bautista Central, was among the many Convention leaders who participated in A National Call to Prayer event on Tuesday evening. Cabrera voiced prayer on stage in Spanish regarding racial reconciliation.

Sen. James Lankford also participated in A National Call to Prayer, speaking on churches in relation to our country. Lankford spoke on Nehemiah, offering the Old Testament leader as an example for church leaders today.

“Nehemiah saw the issues of the nation, and they immediately drove him to pray, and then God answer his prayer,” said Lankford. “I wanted to set that out as a great example that maybe we would do the right thing the right way. For whatever reason, the church has become as frustrated as the rest of the nation. We’re expressing frustration, and really we should be the people expressing the greatest hope.”

Though he has attended the SBC annual meeting in the past as a youth pastor, this was Lankford’s first opportunity to speak at the national event. He said he was impacted by the Call to Prayer event.

Dilbeck shared how America is facing a presidential election this year that is “unlike any other,” and he said he is hearing a lot of disappointment and even expressions of grief.

“I think it is a tremendous opportunity for the pastor of the local church,” Dilbeck said as a sign of hope. “There are people who have a loss of perceived dominance, Bible-believing people who always ‘win the day.’ It’s a struggle of real loss. Many of our people are finally dealing with that reality. But just like Nehemiah had to sit down and weep, we have tremendous political tools like voting and engaging politically. However, some of our spiritual muscles have gotten weak, such as prayer and proclamation of the Gospel. We need to call back to the spiritual influence that will always be our primary influence.”

Dilbeck also said pastors need to encourage congregations to be involved in local elections, even encouraging members to consider running for office as faithful godly Christians to make a difference politically.

Falls is BGCO Native American strategist, and is in consultation of other ministry projects, all of which caused Falls to examine how to be most effective.

“I think FoNAC is in good hands,” Falls said before reiterating the need for the Fellowship that he helped start in 2007. FoNAC’s first annual meeting was in 2008 in Indianapolis, a day before the SBC annual meeting there.

“We don’t have Native American mega churches, but we do have people who love the Lord,” Falls continued. “If we do it together, there’s no reason we can’t do what God wants done.”

Replicate Ministries hosted a breakfast event that offered a panel featuring national SBC leaders such as Gaines, Greear; Hunt; David Platt, president of the International Mission Board; Robby Gallanty, founder of Replicate Ministries. The panel discussed the topic, “The Evangelism Dilemma: Why Evangelism is Not Enough to Fulfill the Great Commission.”

A wide variety of breakout sessions, as well as other fellowships, events and meetings were held.

Aimed at giving pastors a charge like the one the apostle Paul gave his son in the ministry, Timothy, in 2 Tim. 4:5-6, the 2016 Southern Baptist Convention Pastors’ Conference preceded the SBC annual meeting, June 12-13, at the America’s Center Convention Complex in St. Louis.

With the theme “Live this!,” the Sunday evening and Monday morning sessions focused on issues such as suffering, endurance, the Gospel, cross-cultural ministry and evangelism.

Noah Oldham, pastor of St. Louis, Mo., August Gate, opened the Pastors’ Conference, preaching on ministers of the Gospel being willing to suffer for the glory of God, based on 2 Tim. 4. James MacDonald, pastor of Rolling Meadows, Ill., Harvest Bible Chapel, warned pastors of five obstacles to endurance, including loneliness, discomfort, conflict, rejection and exhaustion.