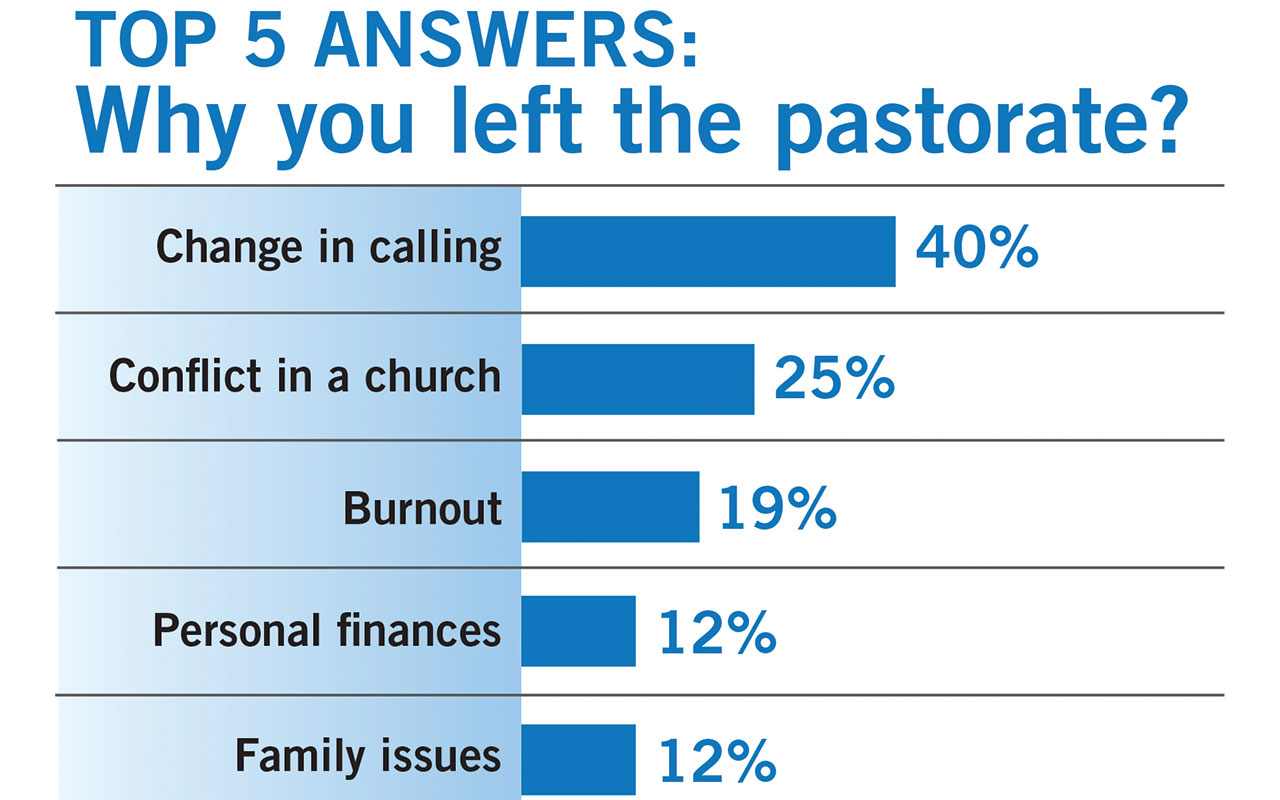 NASHVILLE, Tenn.—No sabbatical. No help with counseling. No clear picture of what’s expected.

Hundreds of former senior pastors say these were the crucial elements missing from the final churches they led before quitting the pastorate.

A recent study by LifeWay Research points to ways churches can encourage pastors to stay in the ministry, said Ed Stetzer, Executive Director of the Nashville-based research organization.

“Almost half of those who left the pastorate said their church wasn’t doing any of the kinds of things that would help,” Stetzer said. “Having clear documents, offering a sabbatical rest, and having people help with weighty counseling cases are key things experts tell us ought to be in place.”

Trouble begins early, the survey indicates, with 48 percent of the former pastors saying the search team didn’t accurately describe the church before their arrival.

Their churches were unlikely to have a list of counselors for referrals (27 percent), clear documentation of the church’s expectations of its pastor (22 percent), a sabbatical plan for the pastor (12 percent), a lay counseling ministry (9 percent), or a support group for the pastor’s family (8 percent). Forty-eight percent say their church had none of these.

Most expected conflict to arise, and it did—56 percent clashed over changes they proposed, and 54 percent say they experienced a significant personal attack. Yet nearly half (48 percent) say their training didn’t prepare them to handle the people side of ministry.

“Many seminary programs don’t even require courses on the people side—they’re focused on theology, biblical languages, and preaching, which are important, but almost half of the pastors felt unprepared for dealing with the people they were preparing in seminary to lead and serve,” Stetzer said.

Though almost two-thirds (63 percent) spent more than a decade as a senior pastor, they eventually moved on—most to another ministry role other than senior pastor (52 percent) but 29 percent to non-ministry work.

Forty percent say they left the pastorate because of a change in calling. They also cite such issues as church conflict (25 percent), burnout (19 percent), personal finances (12 percent) and family issues (12 percent).

“These things are interrelated,” Stetzer said. “If you’re burning out, chances are when conflict arises you’re not going to respond well, and that will make the conflict worse.”

Almost across the board, the former pastors report more negative views than current pastors who answered the same questions several months earlier.

LifeWay Research surveyed 1,500 senior pastors at evangelical and historically black churches in March 2015 and found about 1 percent leave the pastorate each year for reasons other than death or retirement.

Stetzer cautioned the two studies are not directly comparable. The initial study involved all evangelical and black Protestant churches, but only four denominations provided lists of former pastors for the follow-up survey. In addition, the earlier survey was conducted by phone, while the former pastors were surveyed online.

“Though the populations aren’t identical, we do notice the responses from people who have left the pastorate are worse,” Stetzer said. “Either current pastors are painting a rosy picture that doesn’t fully describe reality, or those leaving the pastorate are in a less healthy position. Probably there’s truth to both of those.”

Former pastors are also less likely than current pastors to report an enthusiastic spouse, to take a weekly day of rest, and to work at preventing conflict. They are more likely to worry about their family’s financial security and to frequently get irritated with people at church.

The churches in which they serve look markedly different, according to the surveys. Current pastors report their churches are more than twice as likely as those of former pastors to offer a sabbatical plan and a list of counselors for referrals, more than three times as likely to have a lay counseling ministry and a document listing expectations of the pastor, and more than four times as likely to have a pastor support group.

“When we see a number of items all looking a little less healthy, they can add up,” Stetzer said. “But many of the gaps are preventable. It’s going to take a combination of the seminaries, academia, denominational folks, and even outside ministries putting their heads together and seeking God on how best to support pastors.”