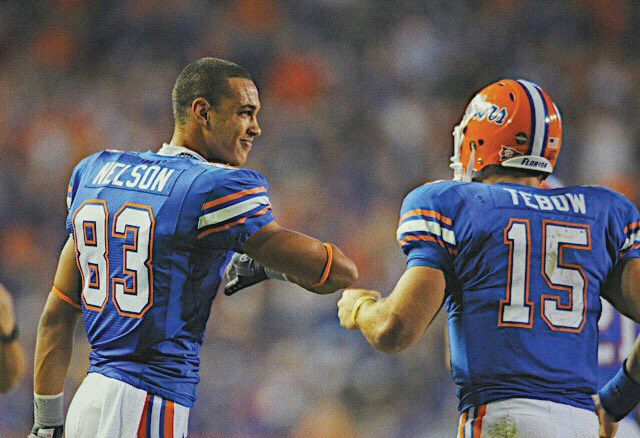 Many lives have been transformed over the past 100 years of ministry at Falls Creek Baptist Conference Center. People of all ages and backgrounds come to the hallowed camp grounds and experience the Lord’s presence, some for the very first time.

Nelson played five seasons in the NFL for the Buffalo Bills, New York Jets and Cleveland Browns. His athletic journey began in Wichita Falls, Texas, but his spiritual journey began at Falls Creek, which he shared during an interview with SportSpectrum.com.

In the interview, Nelson spoke about wanting to go to Falls Creek during his eighth-grade year. “I wanted to experience something on my own. I wanted to find a purpose,” said Nelson who was raised by a Catholic mother, and his father was Church of Christ, always reading the Bible to him as a child before bedtime.

However, there was one problem with Nelson’s plan to attend Falls Creek. He didn’t have the money. So on the Sunday before camp, his youth pastor brought Nelson on the stage and introduced him to the congregation. He explained to the church that Nelson needed help paying for camp and asked if anyone was willing to help Nelson go to camp. His request was met with silence.

Nelson said he wanted at least one person to come forward and donate a dollar, anything, because he was so embarrassed in that moment. Then, a small, elderly woman rose out of her seat. She placed a bag full of coins in the offering plate.

Nelson said she explained how she had been saving the money for the past six months to do something nice for herself. He recalled what she told him.

“For some reason, I’m feeling called to give you this money, and I pray that it blesses you more than it could ever bless me,” she told Nelson.

After that donation, Nelson was only $15 short of his goal for camp and his youth pastor covered the difference. As a camper at Falls Creek for the first time, Nelson heard David Nassar speak during an evening service.

“I knew without a doubt that it was time for me to give my life to the Lord,” Nelson said. “Not the Lord that my Dad worshiped, not the Lord my mom worshiped, but a personal commitment, a personal relationship with the Savior over my life, recognizing what he had done for me.”

That night at Falls Creek, Nelson accepted Christ into his heart. He began the process of owning his own faith, rather than depending on the faith of others to carry him through life.

“It is such a powerful feeling and experience, it’s not an external experience that a week later it just washes off like a flame that burns out, it’s an internal transformation,” Nelson said. “In Philippians it says what I once counted as gain I now count as loss for the sake of Christ (Phil. 3:8), and the things that I held near and dear to my heart and have been pursuing and living for just no longer seemed valid or important, and there was no denying it.”

Nelson credits the small, elderly woman who gave, what seemed like, all she had in order for him to go to Falls Creek for the thousands of lives that have been changed through his ministry, imme.org, “It’s just a powerful reminder to me of how much beauty and how powerful it can be when one person responds to the call that God has for you.”

Nelson now spends his time with his ministry focusing on “Ending the Orphan Cycle through family.” ImMe helps with job creation, education and family preservation. According to Nelson, starting ImMe “was the first time I can honestly say that I stepped into something that I felt was my purpose for my life with no plan B, no back up plan, just complete faith.”