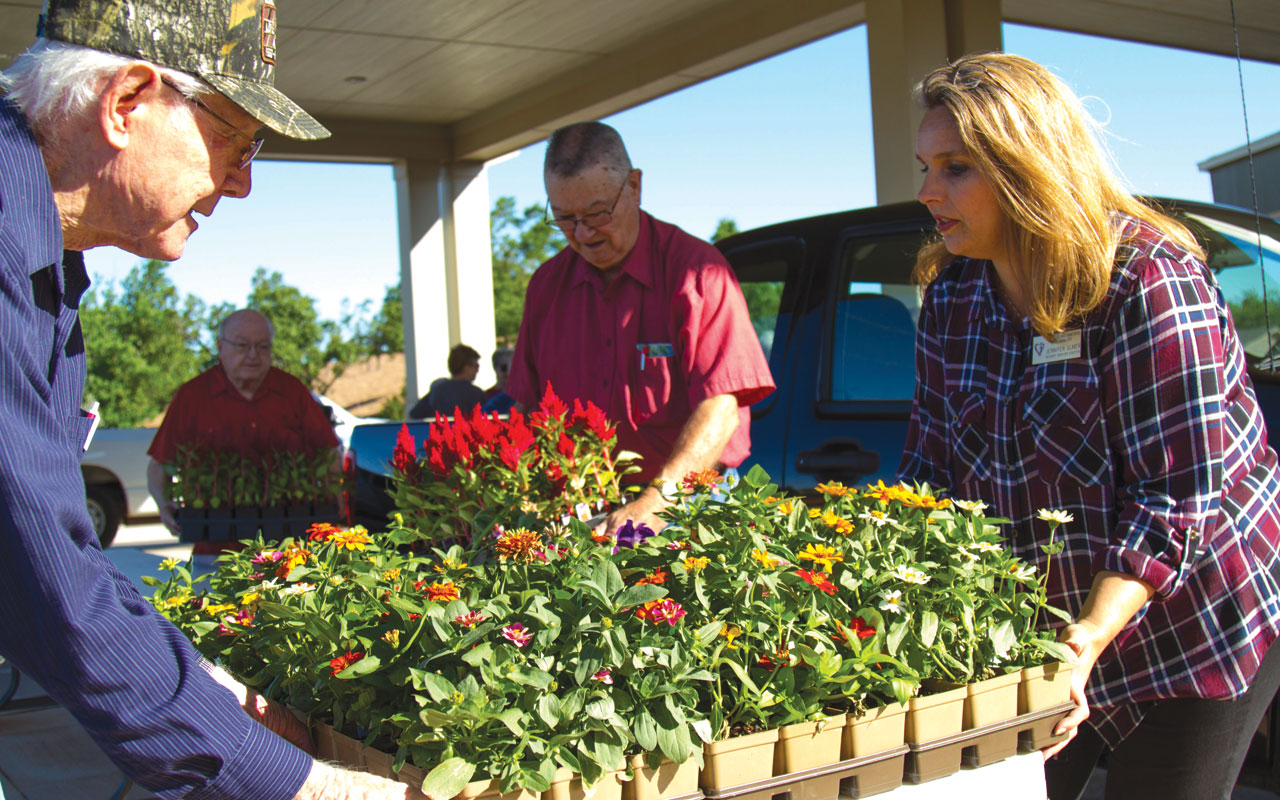 >> by Mike Schuler, Director of Marketing and Communications, The Baptist Foundation of Oklahoma

They came by the truckload—impatiens, begonias, zinnias and periwinkles—to the delight of Baptist Village of Oklahoma City (BVC) residents eager to flex their green thumbs and brighten their homes.

On May 13, dozens of seniors took part in the community’s annual flower giveaway, which provides free bedding plants for BVC residents to grow in their courtyards, patios and gardens.

“It keeps me outdoors and it beautifies the whole campus,” said 90-year-old Doris Hill as she carried a tray loaded with vibrant red and lavender blooms. Betty McAlister, 82, was headed “straight home” to plant her flowers. “I think it’s wonderful because I’m a yard person,” she said with a grin.

BVC Resident Council Chairman Sid Adkinson has run the flower giveaway since it began five years ago. Adkinson, 89, said it’s all thanks to an Oklahoma City woman named Ruth*, who had a generous heart and a passion for flowers. With the help of the Baptist Foundation of Oklahoma (BFO), Ruth created a special gift in her will known as an endowment, which allowed her to provide flowers for BVC residents every year, indefinitely.

That’s a good thing, Adkinson said, because the flower giveaway continues to grow in popularity, from 40 residents in 2011 to 75 this year. That meant bringing in nearly 700 plants this year, which resident volunteers ferried from a local nursery.

Chris Finley, director of BVC’s chaplain services, said the impact of Ruth’s gift on residents’ quality of life is tangible.

“It’s really neat to watch the residents plant the flowers in their courtyards; they’ll step out and say, ‘Come look at my flowers!’ And they have that bragging right just like they had in their own neighborhood,” Finley said. “At the Baptist Village, that’s what we are trying to create—a neighborhood environment.”

Margaret Gibbany agrees. The 85-year-old was among the first in line at the giveaway, and said blooms weren’t the only thing she expected her plants to grow.

“This brings people together,” she explained. “We meet other residents that we don’t see but once or twice a year. It gives people a pride of ownership of their little area and a way to build friendships.”

Randy Ice was instrumental in creating the endowment that finances the flower giveaway. He is a finance professor at the University of Central Oklahoma and a member of the BFO’s advisory board. He was also Ruth’s neighbor.

“Ruth had a wonderful garden filled with flowers, and as she neared the end of her life, she wanted to share that joy with others,” Ice said. That’s where the power of endowment comes in.

“Anyone can create an endowment—it’s simply a tool that allows you to make a charitable gift, either during your life or through your estate after death,” Ice explained. “That money is invested and the income goes to the cause that you are trying to support. And because an endowment lives on in perpetuity, in the case of Ruth’s gift, the flowers aren’t going to run out. There are always going to be flowers in the Baptist Village because of Ruth’s Flower Fund.”

The fund is only able to provide flowers for the Baptist Village in Oklahoma City. But Ice adds that could be expanded to other Baptist Village locations across the state if good market returns continue to grow Ruth’s endowment.

Ice’s mother, Joan, also lives at BVC. Though the 77-year-old’s apartment doesn’t have garden space, that doesn’t stop her from enjoying the flowers as she visits friends around campus.