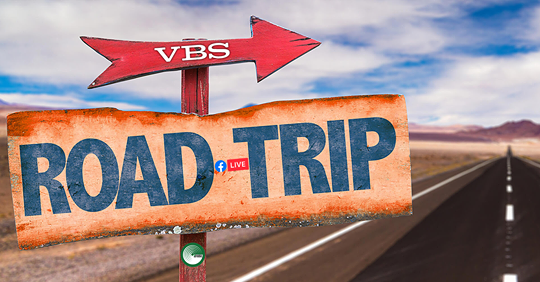 Some of my earliest memories of church come from VBS. My mother was known in our church as “The Cookie Monster.” As summer approached each year, she would begin collecting cookies and Kool-Aid to feed the numerous kids who would come to our church for a week filled with Bible study, crafts, games… and cookies.

When I was commissioned as an IMB missionary, I recalled my early memories of missions education when I stood on the stage during VBS to help act out the mission story of the day. 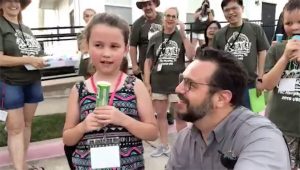 Marc Ira Hooks stops to talk with one of thousands of kids in Vacation Bible School – this one holding a popsicle – while shooting the CBA Church Network’s series “The VBS Road Trip” on FacebookLIVE this summer, encompassing 24 churches and traveling more than 1,000 miles in Collin County, Texas.

They would dress one of us in rags that had been “bloodied” by catsup while another would don a white lab coat, stethoscope and one of those reflector thingies that old-fashioned doctors would wear. Then we would act out the story as the VBS leaders shared how the missionary-doctor traveled to a foreign land to bind the wounds of the broken — and how Jesus, just like that doctor, can heal our spiritual needs as well as our physical needs.

As a missionary, I found myself dressed in a Russian-style fur hat and a parka sitting next to some women who had made their way through Siberia’s ice, snow and bitter winds to draw water from the village well. I shared with them about the one who brings living water. To be sure, a week of VBS will not just provide experiences that change the lives of children who attend, it has the potential to change hundreds or thousands of lives around the globe.

This summer, I traveled more than 1,000 miles here in Texas over Collin County roads during a “VBS Road Trip,” visiting 24 of the many Collin Association Church Network churches who hosted VBS for their neighborhoods and doing short videos. Though the theme was often the same, the VBS experience from church to church was vastly different. However, the one thing each had in common is that young lives were being changed through the transforming message of the Gospel of Jesus Christ.

On one stop, the pastor left me abruptly minutes before our live video broadcast because a young man had just indicated he wanted to talk about how to accept Jesus as his Lord and Savior. On another stop, one of the children talked about how scared John the Baptist must have felt to baptize Jesus because he realized Jesus was the Son of God. And during a visit to an adult VBS (yes, that is a thing), a young man gave testimony about how Jesus appeared to him while he was in a coma, and now his life’s mission is to proclaim the Gospel.

This summer, countless girls, boys, women and men have come face-to-face with a living witness to the Gospel of Jesus Christ, and that is what VBS is all about: the transformational work of Jesus among the families in the neighborhoods where we live.

Marc Ira Hooks is associate director of missions and director of communication for the Collin Baptist Association in Texas.