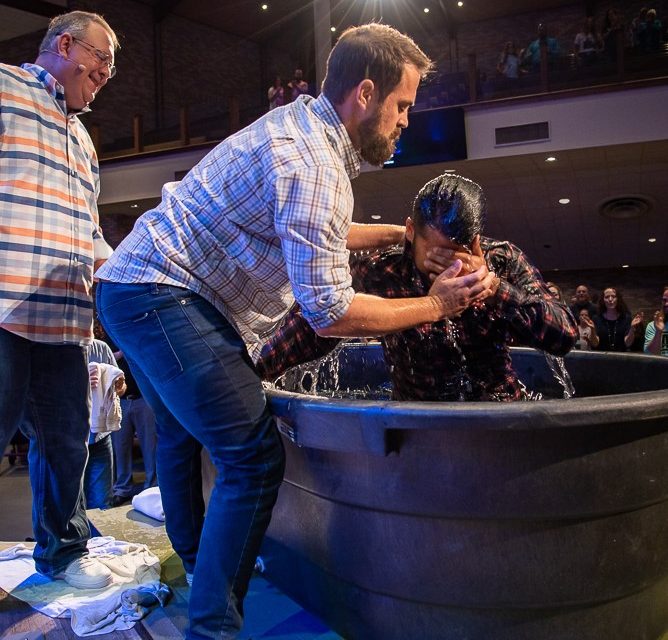 At Ada First, the revival was like a window. It opened us to fresh air, a breeze or a mighty wind. And, like all windows, it can shut as quickly as it opens. But for the eight weeks it was open, it changed our church.

In June, I was gifted a sabbatical from my church. After asking other pastors how they spent their sabbatical, I booked a cabin in the mountains of north Georgia. Alone for a week, I spent a lot of my time in silence, trying to hear in my heart from the Lord. It was one of the most powerful times of prayer that I have had.

I spent time with my late friend, Chris Swain, and his pastor, Robby Gallaty. Robby spoke about sitting alone with the Lord in prayer time, not talking or reading but just listening. After that, his church, Hendersonville, Tenn., Long Hollow had experienced a fresh touch of revival.

As a result of that week, two things happened in our church family.

Elijah Series. That week I wrote out a vision sermon for the next five years and a six sermon series on the life of Elijah. The Elijah series would take us verse by verse through all the passages that mention Elijah. It would come to pass that I stretched the Elijah series to nine weeks, and that was how long it felt our church was in revival.

Bold Prayers. Also, that week I made a bold prayer to God that I thought would be personal. But on my first Sunday back at Ada, First, I publicly prayed, “Lord, would you work in my church or move me to a church where you are working.” That prayer became prophetic.

I was discouraged from COVID and the quarantines. I was desperate for revival. And I was willing to go hard after the Lord with my church.

I felt the revival started when preaching through the Elijah series and came to the James 5 passage about healing and prayer. I had just attended the SBC Prayer Task Force meeting in Nashville. There I spoke with Steve Gaines, former SBC president, about the idea of preaching that passage and offering prayer for healing with anointing oil, as the Scripture states.

It was outside my comfort zone, but I invited people to come for prayer for any healings with being anointed with oil.

When I opened my eyes from the prayer, people were everywhere, lined up in the aisles. Quickly, we took the oil and gave one to every associate pastor. For the next several minutes, all we did was pray for people one at a time and anoint them with oil. It was a powerful day and started what I believe was a new freedom to the altar call.

The following Sunday was “Fill The Tank Sunday,” and we had four baptisms scheduled. We brought a portable baptistery and placed it in front of the pulpit on a stage extension. I told our church, “Our tradition has the pulpit in the center to highlight the importance of preaching God’s word. Today, we are highlighting the importance of life change through baptisms.”

After we baptized the four planned candidates, I felt led to appeal to anyone to follow the Lord with spontaneous baptisms. Four other people came for immediate baptisms. All were college-age students.

That moment repeated itself for the next six weeks. Each week, along with a few planned baptisms, we also had spontaneous baptisms.  Our church was excited and heard testimonies from moms, students, young adults about immediately obeying God.

After those seven weeks, 21 people were baptized, and only about seven were planned.

Then, as we felt the revival slow down, we called for a church-wide prayer meeting. It was one of the most powerful prayer meetings I have ever attended. There were only about 100 people there, so it was small compared to the Sunday morning services. Still, it was a larger-than-normal prayer meeting.

That night, I gave a brief devotion and asked if anyone needed to share, confess or testify. For the next 90 minutes, the microphone kept getting passed. People would come and admit a struggle or similar, and I would call people who can relate to that struggle to come to pray with them.

In the eight weeks of our revival, we saw a massive response to a call for healing, almost two dozen people baptized, big altar call responses each week and a unique prayer service that moved our church.

At the beginning of the Elijah series, we showed a short video of a basketball coach who was baptized at Falls Creek. Cody had been saved a few years ago but never followed the Lord in baptism until we baptized him. In his video, he said something that became our theme during this revival season. He said that God told him it was time to be obedient and be baptized and “when God speaks, we obey.”

I believe our church will not soon forget the short season of revival when several people heard God speak to their hearts, and they obeyed.

A favorite quote on revival is from Leonard Ravenhill, “If you can live without revival, you will.” I think our church was tired of living without revival.

View all posts by Brad Graves