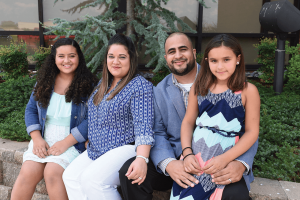 Cabrera will perform the executive directorship in an interim volunteer, nonpaid capacity. He is also a NAMB Send missionary and second vice president of the Southern Baptist Convention. Jorge Alvarez, pastor of Arecibo, Puerto Rico, First, served as the CIBSPR acting executive director before Cabrera’s appointment.

Sena said he joins Ken Weathersby, SBC vice president for convention advancement, in praying “that God will use Pastor Cabrera’s passion and commitment to evangelism, church planting and leadership training to expand God’s Kingdom and the work of” CIBSPR.

CIBSPR held its first annual meeting since Hurricane Maria Nov. 17, electing a full slate of officers and a board of directors. CIBSPR has a new and aggressive plan to serve local churches and pastors, Cabrera said, and to work cooperatively with the North American Mission Board’s Send Relief efforts in Puerto Rico.

“I’m excited to work with the new board of directors and with the pastors, with the church planters,” Cabrera said. “I’m excited to see a combination of new pastors and veteran pastors working together in the same spirit, in the same faith, with a spirit of unity.”

As executive director, Cabrera said, he will first meet with pastors, learn the welfare of leaders and families, assess the condition of CIBSPR churches, and determine the best ways to serve and help Southern Baptists and their ministries on the island.

“Every church in Puerto Rico made a commitment to give more to the Cooperative Program,” Cabrera told BP. “We in Puerto Rico, in the last year, evidenced the benefits, the blessings to be Southern Baptists,” he said, referencing Southern Baptist Disaster Relief and compassionate ministries to pastors and churches there following the 2017 devastation of Hurricane Maria.

“We want to encourage our churches, our pastors to give more to the Cooperative Program,” he said. “We want to be more involved … in SBC life.”

Cabrera talked to BP from Puerto Rico and is in the process of relocating to the U.S. territory, the place of his birth. He will preach his last sermon as pastor of Oklahoma City, Iglesia Bautista Central on Dec. 23.

Cabrera is also searching for a home for Iglesia Bautista Ciudad de Dios, a CIBSPR member and mission congregation he is currently planting on the island. Nearly 80 churches comprise CIBSPR.