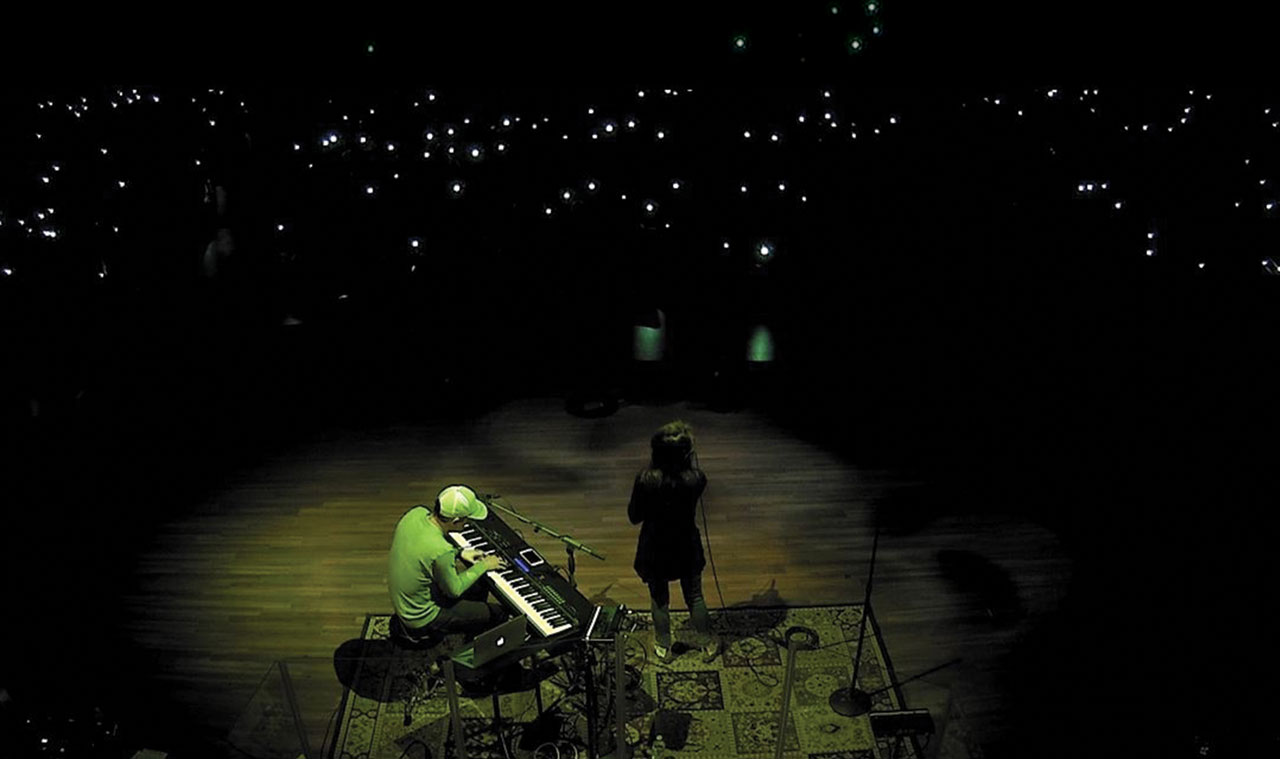 DAVIS—Students were challenged at the 2018 Youth Evangelism Conference (YEC), Jan. 14-15 at Falls Creek Baptist Conference Center to share their faith in a “Fearless” way as they go about their lives as Christ followers.

Students were met with several “Fearless” elements while at YEC, including the Real Encounter Stunt Team, a ministry outreach made up of professional athletes and ministers in the area of Moto Stunting, Street Bike Stunting and a BMX Bike stunt team. Dramas were presented by the Clear Vision Drama team, a six-person team that shares the Gospel through means of drama and creatively challenging Christians with Biblical truths. Nick Thurmond and his band led worship for the weekend. 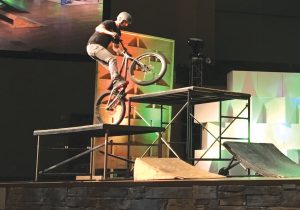 Real Encounter Stunt Team performed several times at YEC. It is a ministry outreach made up of professional athletes and ministers.

Brian Baldwin, student ministries specialist of the Baptist General Convention of Oklahoma (BGCO) said, “I think when you’re talking about sharing the Gospel, it is the modern-day Luke 9:23 which says, ‘If anyone wants to come after me, let them deny themselves daily, take up their cross and follow after me.’

“These kids won’t ever have to endure the Roman cross, but the cross that they bear today is the figurative ‘social death’ that they have to be willing to die. To a student, it’s a very real and scary thing.”

On Monday morning on Martin Luther King Day, in the third general session, Baldwin, Black, Todd Sanders and Andy Harrison took to the Falls Creek stage to explain an effective way of sharing the Gospel using the acronym, G.O.O.D. N.E.W.S.

The “G” of G.O.O.D. N.E.W.S. stands for “Go to God in prayer.” Black related sharing the Gospel with friends to extreme sports, in a high adrenaline moment when there is fear, and told students to harness that fear and cling to Jesus.

Black said, “Before you ever talk to people about God, talk to God about people. In that, you have the opportunity to tap into the unlimited resources of heaven.” He then referred to Matt. 10-19:20 and reminded students that God can speak through them.

The “O” in G.O.O.D. N.E.W.S. stands for “Open up a conversation,” which Sanders, BGCO student education specialist, explained. He told students to see people as people, and not as a project, then used an acronym of his own: L.I.F.E. 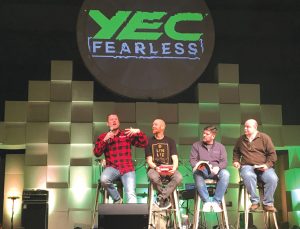 Sanders said some ways to open a conversation would be to talk about a person’s Location, Interests, Family and Education. The next “O” in G.O.O.D. N.E.W.S stands for “Observe and admire what they believe.”

Andy Harrison, BGCO student ministries specialist, talked about how differences in beliefs should be met by listening to what someone believes first. Then the student can share their faith once they’ve first listened to who they are speaking. “You want to build a bridge and not a wall between that person of another faith and yourself. Even though what they believe may be incorrect, you can still admire their devotion to it,” Harrison said.

Baldwin then discussed that the “D” stands for “Describe what you believe,” instructing students to describe that there is one great God, one great problem (sin), one great hope and one great decision to make.”

Baldwin, Black, Sanders and Harrison continued describing the acronym G.O.O.D. N.E.W.S by saying to “Note your testimony,” “Examine if that has happened to them,” “Welcome them to trust Jesus” and “Show them what to do next.”

Throughout their time at YEC, students had the opportunity to attend breakout sessions that covered a wide variety of topics.

Nick Howk, Oklahoma native and student pastor at Houston, Texas, TheMET, spoke with students about inviting their friends to church and youth group functions “with excellence.” Howk  explained when people receive an invitation, it makes them feel wanted. He talked with students about Jesus’ open invitation to anyone who is willing to make the life-changing decision to have a relationship with Him. 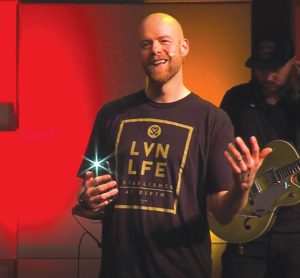 Black, the speaker for YEC, holds his phone with it’s flashlight on to symbolize that he had a Gospel conversation, something he asked students to do in a general session.

Will Wilson, pastor at Tecumseh, New Hope Road, talked with students about social media outreach and how their actions online impact every part of their lives. Wilson said when students act one way in person and another way online, “What you’ve done is you’ve effectively destroyed your witness with anyone who saw what you posted, because what they hear you say one day is that you’re a Christian, and that you live your life for Christ and that you’re involved in church, but what they see you do with your actions contradicts that.”

Breakout sessions also were available for youth leaders. “There were breakouts for youth pastors and then youth pastors that helped with breakouts as well,” Baldwin said. “I  think when we can give ownership away at the event, it becomes our event as a convention not just another youth ministry event.”

Baldwin pointed out that while YEC is important, the most important thing is how students apply what they learned to their everyday lives once the event is over.

Youth groups, as a whole, were encouraged to make a “Strategic Action Plan” about how they would implement what they learned about evangelism into their schools and churches.

Nathan Brumely, youth pastor at Idabel, First said, “At YEC our students set a goal to average 60 students at Fish Club. The day after YEC, we went from 30 to 47 students! The students were shocked!”

Brumley said he told his students that when they pray for something, they should do so expectantly, that God will hear their prayers and answer. “They are beginning to understand prayer is very important, and when we pray we should have the expectation that God will answer. No doubt in my mind, our students will take praying for their friends more seriously.” 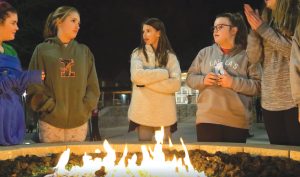 Students gather around a fire pit on Centennial Plaza.

Jeremy Rowan, youth pastor at Kingfisher, First said the Strategic Action Plan was his favorite part of YEC. “They identified the specific groups or area that they want to target and developed goals to reach that target with the Gospel,” said Rowan said. “My group committed to have 10 Gospel conversations per person every month in an effort to share Jesus with every student at Kingfisher Middle and High Schools.”

In the final general session of YEC, Black asked students to bring their cell phones. He then asked students to start or have a Gospel conversation at that moment whether it be through sending a text message or making a post to social media. Black instructed, once students were done, to turn on the flashlight on their phones so that everyone could visually see the Gospel conversations happening in the room.

Students also took part in the 72 hour challenge in which they agree to have a Gospel conversation within the following 72 hours from YEC. This is a challenge with which Oklahoma Baptists may be familiar. “After the 72 hour challenge and having everyone text their person to start a conversation I had a 7th grader lead her friend to Christ over the phone within just a couple hours of being home,”said Jesse Peters, youth pastor at Blanchard, First.

As students returned to school with a “Fearless” and urgent mission to share the Gospel, one 9th grade student said, “I learned from YEC that sometimes you have to use your pains and fears to cling to God. That way you can share the Gospel with other people.”

Ryan Siebert, youth minster and worship director at Norman, Enterprise said, “I think before this weekend I had several students who loved the idea of evangelism, but it never really registered with them what that truly meant until now. The severity of the mission that God has for them has become more of a reality to them after YEC than it was before.”