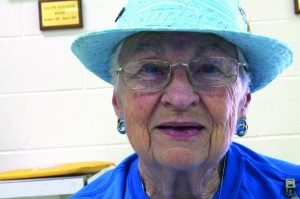 Jean Kendrick, aka Mrs. Jean, is the first face staffers see when they come to unwind and enjoy a good meal. Mrs. Jean has been serving smiles at the Falls Creek Staff Cafeteria since 2011. (Photo: Meagan Thomas)

DAVIS—Mrs. Jean is everyone’s “grandma” away from home during the Falls Creek summer weeks, as well as the other seasons outside of the camp. She offers a warm smile three times a day to those walking into the staff cafeteria for those memorable camp meals.

Jean Kendrick, or Mrs. Jean, as she prefers to be called, at age 74, is “living through her third childhood” as she pours into the lives of staffers who desire to minister to the junior high and high school students who step foot on the camp grounds every summer. Mrs. Jean’s ministry began when her husband passed away in December 2003, and her pastors saw how God could use her in this unfamiliar, scary season in her life. Her ministry began in the haven of mountains in 2004 at the Glorieta Conference Center in New Mexico.

“They connected me with Lee and Bea Carl,” Mrs. Jean said. Lee Carl passed away earlier this spring. James Swain, director of Baptist General Convention of Oklahoma Conference Centers, said the “Falls Creek family” continues to remember Bea and her family in their prayers.

“(The Carls) are the ones who hired me in Glorieta,” Kendrick continued, “and I stayed there for five years. I was the washer lady; everyone came to me for quarters, because they didn’t want to go home with dirty clothes. I got the opportunity to minister to them, in addition to others in that area because they came into Glorieta to wash (their clothes). That was truly a Godsend.”

Mrs. Jean sought another opportunity to minister to young people, and that opportunity found her way when she stepped foot on the camp she now calls home: Falls Creek. She recalls how Falls Creek and its staff has changed her life. 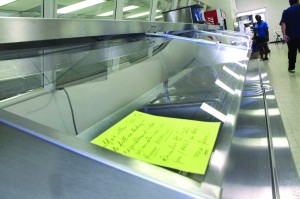 Loving the staffers as her own grandchildren, Mrs. Jean always shares what God is doing in her life daily. “I will always read something in my quiet time, and I want to share it with my grandkids,” Mrs. Jean tearfully, yet joyfully said. (Photo: Meagan Thomas)

“Lee and Bea, at that time, were going to Falls Creek to do whatever they needed (them) to do. I came with them at that time also, and instead of going home, I stayed. Bea and Lee kept me busy! It was that next year when I started working here, taking names and checking them off for breakfast, lunch and supper. It was really in 2011 this became my ministry. God hired me, and I am a volunteer,” Mrs. Jean said. “I joke by saying, ‘Even at Falls Creek, I don’t care what they do, they can’t fire me!’ They think it’s cute, but it really just (fell into place) from then on. I’ve needed them (staffers) far more than they have needed me.”

Mrs. Jean has “adopted” many grandchildren since rooting her ministry at the camp, and seeks to foster a relationship with every single student worker.

“I’ve needed them far more than they have needed me,” she said.

The tenderhearted volunteer confides that these staffers have a future impact.

“I believe with all my heart that your generation will reclaim America back to God,” she said.

Prayer is essential for believers to confide and verbalize their struggles and praises to the one true God. God does not need prayer, but His children need it more than anything when living in a place that is not home, craving a “presence” that does not live here. Mrs. Jean craves the Father, and proudly wears the emblem, “Prayer Warrior” and describes how all believers need prayer.

“I’m a prayer warrior… if we have a relationship with Jesus Christ our Savior, He does not give us an option; He tells us to pray without ceasing. We are all prayer warriors. Let’s just say I’m a little more vocal,” Mrs. Jean said.

As a “Prayer Warrior,” whether her knees are kneeled down onto her bedroom floor, or walking the hills of Falls Creek, Mrs. Jean prays in the wee hours of 4:30 in the morning; she beats the sun to dawn.

Mrs. Jean has a favorite verse that she hides in her heart, Psalm 118:24 and tells the reason why it’s her favorite piece of Scripture.

“There’s a period behind it; there is no option. There have been days, on my knees, telling the Lord ‘I don’t want to rejoice today.’ He says, ‘You’re my child; you will follow Scripture; there’s no option. You will rejoice every day and get over it,” Mrs. Jean said.

With a heart capacity of an entire army, you can guarantee by the time your conversation with the “Prayer Warrior” ends, she will sweetly say, “Guess what you have just done? You just got on Mrs. Jean’s prayer list.”